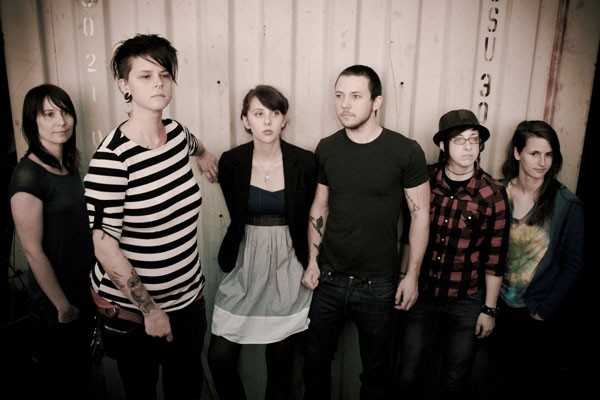 Together, Tampa-area guitarist-vocalist Julian Conner, guitarist Nicole Schleif, bassist Sandi Streppone and drummer Ryann Slauson have made some of the last decade's most well-crafted Florida indie rock. They retired their previous band - the outstanding Giddy-Up, Helicopter! - when one of its guitarists relocated. But after about a year, the creative itch returned - along with singer-keyboardist Tessa McKenna and new guitarist Sandra Covin - and reconvened them as Sleepy Vikings.

"At the beginning, we just wanted to play music," Conner says. "And then we started having fun, so we were like, ‘All right, we should probably get a practice space and just see what happens.'" Then came an irresistible invitation to open for Vivian Girls in October 2009, an opportunity that finally pushed Sleepy Vikings into becoming a real band. Now they're about to celebrate the May 10 release of their sparkling debut album, They Will Find You Here, on Tampa boutique label New Granada.

Sonically, Sleepy Vikings resumes the pretty noise of Giddy-Up, Helicopter!, a sound that's rooted in touchstones like Sonic Youth and Pavement, only sculpted with a crisper melodic sense. "We tried to focus more on songs and less on the noise," Conner says. "Most really good songs can just be stripped down to acoustic guitar and one singer and still be impressive. So I try to come up with catchy stuff that, even if people just heard the one hook line with an acoustic guitar, it'd be memorable." Add in the intricate vocal interplay between him and classically trained lead singer McKenna and the result is a bedrock of finespun Southern indie rock that jangles, rings and enchants.

From that foundation, they build up, considerably and impressively, with a gaze-laced, three-guitar mountain that assigns Conner the clean rhythm chords, Covin the melodic midrange lines and Schleif the atmosphere-weaving magic of noise pedals. "That's kind of an easy way for us to separate out, to actually have a point to the three guitarists rather than all of us just playing, like, B-minor really loud or something," Conner says. Collectively, it's a rare balance of  lightness and heft.

Even though Sleepy Vikings' first full-length album arrives on the wings of a notable label, national promotion and loads of promise, they're a typical striving band chasing their dream.

"We're kind of giving ourselves a little bit of a window," Conner says. "We said [that for] a year after the record comes out, we're gonna bust ass. Even if it's to get to jump on a tiny tour with a sort-of established band, just keep making progress. When we stop making progress, we're probably just gonna call it quits and go on and do whatever we want with our lives. We're definitely trying. That's for sure."

Even with such a solid launch pad, where it goes from here is always at chance's mercy. But in a saturated, niche-heavy musical landscape, their realism equips them well for their upcoming adventure.

"I think we made a good enough record so that we could get some kind of attention and move up a little bit, which is really all we wanted to do. Just get a little more known, a few more fans, maybe have some  people buy it."