UCF’s prestige is growing, but some university employees are rewarded more richly than others 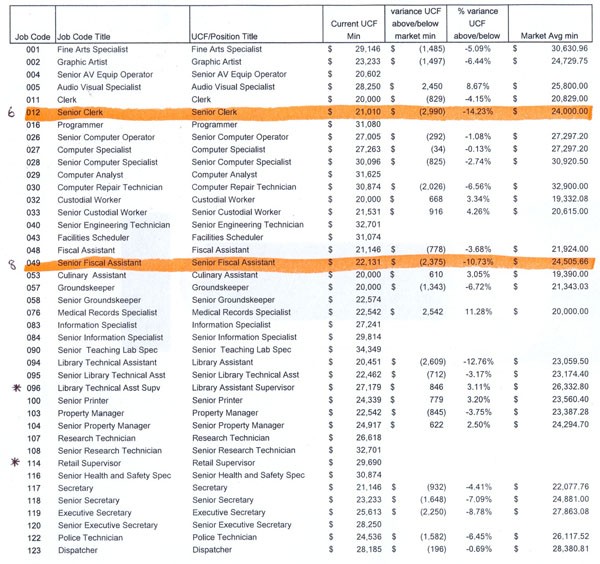 Correction: The original version of this story contained some inaccurate figures, which have been corrected in the version below.

It’s been a momentous year for the University of Central Florida. In May, the university’s new medical school saw an elite first crop of students complete its freshman year. In August, the university opened a $25 million performing arts center on its campus in East Orlando. In November, the university’s football team made its way into the nation’s top 25, cheered on by an undergraduate freshman class with higher test scores than any that came before it.

Despite the university’s rapidly rising star, a hiring freeze, now in its fourth year, has UCF employees across all departments taking on more responsibilities with fewer coworkers to ease the load. Large bonuses for university executives, on the heels of deep program cuts, have frayed already tense relations between staff and administrators. And even after planned salary increases, many of the university’s blue-collar workers will continue to be underpaid – a notion recently  confirmed by UCF’s own study.

On Dec. 6, the university reached an agreement with the American Federation of State County and Municipal Employees (AFSCME) – a union that represents a variety of lower- salaried workers, ranging from custodians to office managers – on a new three-year contract. As part of the deal, the university agreed to give the eligible workers in AFSCME’s bargaining unit a 2 percent raise, which comes on top of a 1 percent raise and a one-time $1,500 bonus in August for all eligible UCF employees.

In giving the raises, however, UCF revealed that many of its lowest-paid workers make less than the local average for their occupations. During negotiations with AFSCME, UCF drew on an internal study of non-faculty positions within the university with base salaries of less than $35,000 per year. Comparing the salaries to those of similar positions in Central Florida, the study found that nearly 200 mid-level employees work at positions with base salaries at least 10 percent lower than “market minimum” salaries. For example, the study says, the market minimum salary for an office manager in the area is $31,192. The university’s 81 office managers, however, start off with 16.6 percent less, at a base salary  of $26,744.

To atone for such discrepancies, the university is giving the largest raises to those furthest behind: a 3.5 percent salary increase for those at positions with base salaries 10-15 percent lower than the market minimum, 4.5 percent for those at jobs starting with 15-30 percent less, and 5.75 percent for a handful of workers dipping below the 30 percent mark. Though they will meet the new “UCF minimums,” the starting salaries of these positions will still remain below market minimums for the area.

The workers’ union, without much leverage at its disposal (only 4 percent of 1,180 eligible employees pay dues), is taking what it can get. “It’s not a lot, but it’s a step in the right direction,” says Doug Watkins, president of UCF’s AFSCME Local 3345.

When asked if UCF planned to eventually bring all of its workers’ wages up to the market minimum, the university’s chief spokesman, Grant Heston, replied in an e-mail: “We will continue to regularly review the salary of our lower compensated employees and determine what action, if any, can or needs to be taken.”

Heston reminded the Weekly that the recession has affected the entire university, pointing out that state financial support for UCF has decreased 30 percent in the past three years. Since 2007, the university has cut $77.2 million from its annual budget.

Despite the austere economic measures, in November, a dozen university executives – mostly vice presidents of various departments – were awarded bonuses totaling nearly half of a million dollars by the UCF Board of Trustees, the university’s supreme governing body. UCF president John Hitt, who is on the staff of the board, received the largest piece of the bonus pie: $185,300. That comes on top of his $465,300 salary, which makes him the second-highest-paid university president in Florida.

Hitt’s bonus is a shade over the $170,000 that the supplemental raises for 275 AFSCME employees will cost the university. The university contends that Hitt’s bonus was merited by his fulfillment of UCF’s goals for enrollment, retention rates and fundraising, based on “rigorous performance standards” set by the board.

For some, the bonuses aren’t the only reason to doubt the university’s sincerity. Jim Gilkeson, chief contract negotiator of UCF’s faculty union, guesses that the university only gave AFSCME an additional raise to be consistent with the 3 percent raise the faculty had wrested from it less than a month before. “That’s been the process in the past. If we had been able to negotiate a larger raise package, then they match that to everybody else,” he says.

Then, there’s the hiring freeze: Workloads for all employees are growing heavier due to the one-two punch of workforce attrition and UCF’s rapidly growing student body, which became the nation’s second-largest this fall. “When you increase the size of the university, you increase the number of facilities that have to be manned by people – but that increase isn’t happening,” Watkins says.

Watkins says another issue left unaddressed by the latest deal is of paying out-of-pocket for work expenses – for example, AFSCME employees have to pay $177 per year to park on campus. Though Watkins acknowledges that all students and staff must pay to park, he says the fees hit the lowest-paid workers the hardest. “It’s not right if you have to pay to go to work – especially if you’re making nine and a half bucks an hour,” he says.

This is an annotated study of non-faculty jobs at the University of Central Florida starting at $35,000 or less per year. The analysis was conducted by the university in fall of 2009; throughout the following year it was used to determine the size of pay raises for those in the bargaining unit represented by the American Federation of State, Municipal and Council Employees (AFSCME) union. The study compares base salaries of jobs at UCF to the minimum salaries of the similar positions outside of the university in  Central Florida.

Annotations: A number to the left of a job code signifies how many workers currently occupy that position. (The Weekly asked UCF for the number of workers at every position on the study, but the university was not able to provide this information by press time.) Positions highlighted in orange have base salaries of at least ten percent below "market minimum" salaries, thus workers at those positions will receive supplemental raises on top of the 2 percent, across-the-board increases. Unless notated by an asterisk to the left of the job code, all positions in this study fall under the AFSCME umbrella.