Tanks for the memories 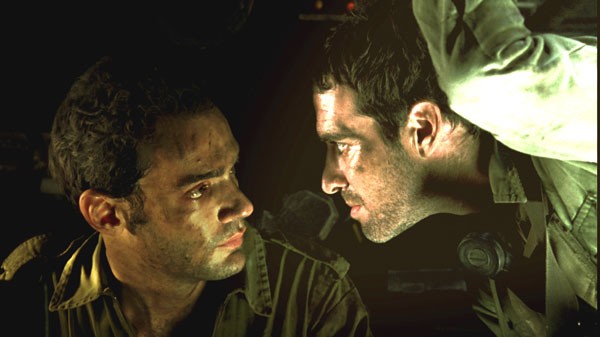 War is, was and always will be hell. To paraphrase David Mamet, that’s why they call it “war.”

Samuel Maoz knows this firsthand, having been an Israeli soldier in 1982’s first Lebanese war and having placed the four central characters of his feature directorial debut, Lebanon, in a similar position. Actually, he’s made a point of confining them a bit more than he was – they’re tank operators, and very little of the film takes place outside of the hulking metal beast they call home. Think Waltz with Bashir meets Das Boot.

There’s Asi (Itay Tiran), the commander who gives orders because he’d rather not be forced to pull a trigger or lift any shells. Under him is Shmulik (Yoav Donat), Herzel (Oshri Cohen) and Yigal (Michael Moshonov), all of whom would rather be giving orders, too.

Four young soldiers forced to make judgment calls that they want no part of, obeying orders they never quite understand, shooting from a grease-covered coffin while standing in puddles of oil, water, sweat and tears. (The urine goes into an ammunition container, while the bleeding hearts drip less from their sleeves and more from their mouths.) Can reportedly sympathetic locals outside the tank be trusted? What about the prisoner they’re eventually tasked with transporting? Could our boys cut and run? Should they?

As a writer, Maoz is rarely subtle in his dilemmas. Maybe 10 minutes pass before innocent lives are lost when the gunner first freezes up on an approaching target, then fires away at the next one. The characters aren’t given traits so much as types: the commanding officer who falls apart, the new guy who rises to the occasion, etc., and their decisions are generally dictated by a sense of fear and dramatic convenience.

Each performance is a credible one, all wide eyes and frayed nerves, but there’s apparently no room for nuance in such small spaces. The view from the turret is almost always centered on the pained look of the nearest man, woman, child or animal as if they were instructed to imitate that famous National Geographic cover. (You know the one.) And the eager foreshadowing that comes with a shot of the Twin Towers in a bombed-out travel agency? Please.

As a director, however, Maoz displays remarkable technical prowess in keeping the camera confined but never restricted. His use of sound design is particularly superb as the tank’s turret constantly whirs around, its engine verging on collapse. Meanwhile, the soldiers’ only perspective of the outside world gets increasingly murkier, muffled and cracked.

Lebanon works on a basic pressure-cooker level, but its greater messages are too broad to behold and too familiar to take full emotional stock in. When it isn’t making war feel like hell, it makes anti-war sentiment feel passé.