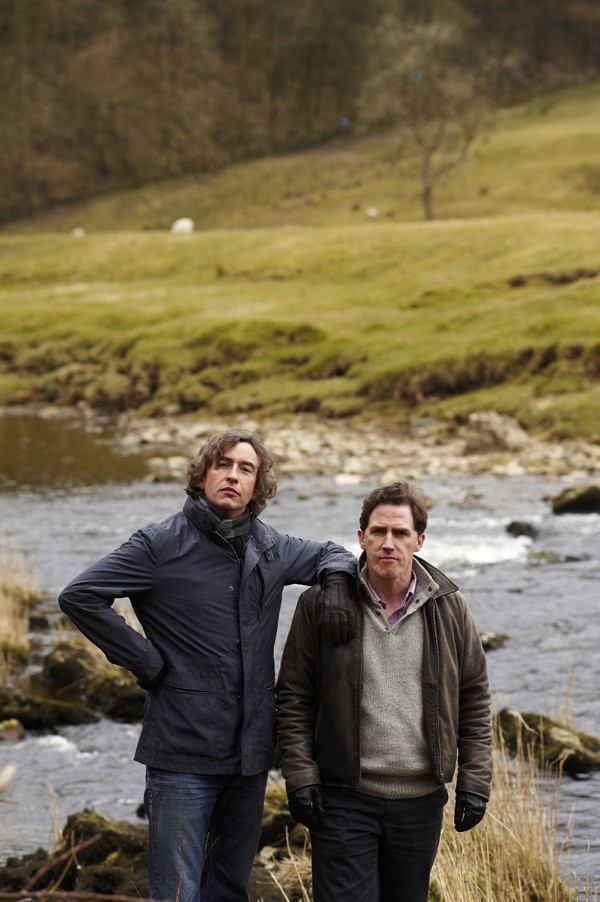 On paper, it sounds like it would be a blast to embark upon a road trip with a British comic actor who recites Wordsworth in the voice of Ian McKellen, who gamely allows you to eulogize him, absorbs personal jabs like a champ and makes for a decent wingman in the presence of ladies.

As portrayed by real-life British comic actor Rob Brydon (above, right) in celebrated director Michael Winterbottom’s fitfully funny, more often painfully slow The Trip, however, the reality of such a companion is much more depressing and downright obnoxious. Brydon’s chauffeur here is Steve Coogan – they both play somewhat fictionalized versions of themselves – touring Northern England on assignment for a British newspaper, ostensibly on the hunt for exquisite roadside dining. Coogan isn’t much more attractive as a fellow journeyman; he beds innkeepers with almost no effort (“Women are my windmills,” he opines codependently to family man Brydon. “I tilt at them”), mercilessly pokes at Brydon’s obvious insecurity and one-ups his mate’s practiced Michael Caine impression. (Admittedly, Coogan’s peacocking isn’t without merit; he’s a star. Brydon, who isn’t nearly as famous as Coogan in the movie or in reality, is more like a consistent light bulb.)

Yet somehow the two keep from killing each other – or even griping all that much – long enough to make it through a hefty chunk of pleasing celluloid. Originally planned for British TV, The Trip is gorgeous, a feat achieved simply by planting a camera among England’s Yorkshire Dales, Brontë-inspiring moors, Lake District and the colorful cuisine constantly being shoved in front of the two. Winterbottom’s thin thread of a traditional plot doesn’t pose much of a problem. If this were nothing more than a Travel Channel special, I would still feel satisfied afterward, rendering Coogan and Brydon’s occasionally dull, incomprehensible companionship (I’m already looking forward to seeing it with subtitles on DVD) something akin to cranky tour guides – and who hasn’t had to put up with those before?

It’s not exactly a ringing endorsement to say that a film’s two lead actors are tolerable distractions from the scenery, but there are a few moments when they elevate themselves, clinging onto the faintest nugget of a comic idea and gorging on it until, by god, they have a workable bit. You might have heard before now about the Michael Caine showdown, but an equally hysterical rant pops up out of thin air: Discussing their wake-up time for the next day, Coogan and Brydon construct a marvelous back-and-forth based around the concept of the same conversation happening in a costume epic. “Gentlemen, to bed, for we ride at 9:30-ish.”

It’s when things get quiet and contemplative that the two instinctively retreat, and one can’t help but feel frustrated that Winterbottom lets them off the hook time and time again. One telling lunchtime conversation brilliantly addresses the problem as Coogan wonders aloud why he never gets cast in Michael Sheen-esque roles. Brydon, ever the friend, suggests it’s because Sheen is the better actor, but we know that Coogan may inherently possess the typical comic’s intimacy issue.

He wisely (yet not winkingly) undercuts the tension with a joke. Naturally.