This Week: A ride-along on a party bus that takes college kids to the downtown bars. 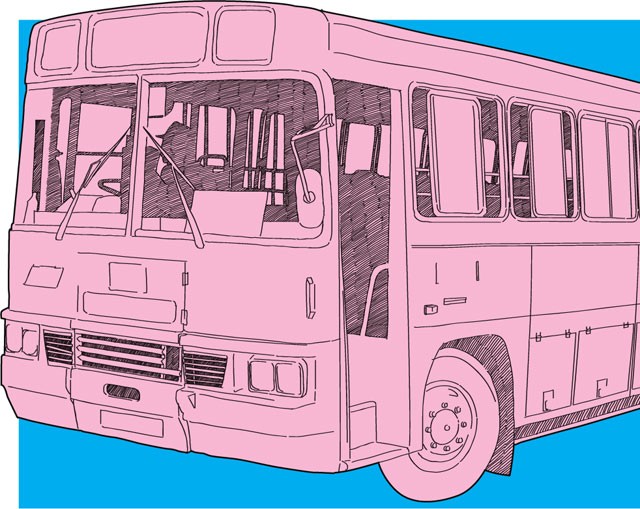 Every Thursday night, my friends and I sit on the Independent Bar patio, crush a few beers and watch the horde of drunk 20-somethings stumble down Orange Avenue. We weren't sure where all of these drunk kids were coming from, but eventually we discovered the source: each night, an unremarkable white coach dumped its payload and flooded downtown with blowouts, broken high heels and bad decisions.

My friend Chuck and I decided to Google "Orlando Party Bus" after we solved the mystery. Three or four sites popped up, each assuring the "ultimate party experience" with bikinied women leaning over white powdered beaches, friends posing in front of the Orlando Skyline on a rooftop deck somewhere. One of the bus lines, its website said, picks up at UCF every Saturday night, providing trips downtown and entrance into select nightclubs for $10. A simple phone call reserves your seat. Two weeks later, we were party-bus-bound.

9:30 p.m.
I roll into my friend's apartment across from campus. There are many beers on his kitchen counter. We chug them to the sweet sounds of Starship's "We Built This City on Rock and Roll," like the badasses we are, and leave toward campus for pick-up.

10:26 p.m.
The road into UCF is jammed with traffic from a nearby high school graduation. This makes Drunk Me upset. I yell at the cars that poor decisions are of the essence, and would they kindly move their asses along. They can't hear me, but it feels pretty nice. Also, I have yet to wet myself. So far, so good.

10:32 p.m.
On campus, we find two white, unmarked coaches idling quietly in a parking lot. The first bus has a line of maybe seven people jawing at each other outside. Some guy wearing a fluorescent pink Oxford shirt and black slacks is standing by the bus door. He must be the doorman, although he wears nothing to suggest as much. We fork over our cash, get banded and take our seats.

10:47 p.m.
The bus is relatively empty. The cabin lights are dark. My buzz has dulled some, and I realize this is how many a horror film settles in, right before the maiming starts. I begin asking around the bus for more alcohol.
Me: "Hey, this is pretty weird. Have you ridden this thing before?"
Kid Behind Me with Bottle and Braces: "Nah, it's my first time. You want some? It's African wine."
Me: "African wine? Are you a student here?
KBMWB&B: "Nope, I just graduated from high school, over there."
Me: "... Oh."

10:50 p.m.
I hear rustling and voices outside. Seemingly out of nowhere, a reveling horde has emerged in the parking lot. Students carry bottles and cans and entire handles full of alcohol. I find myself fast becoming the Least Drunk and Most Boring Person Around very quickly. I am violently shamed.

11:01 p.m.
Seriously, there's a lot of fucking drinking on the bus. Kids drinking Sailor Jerry's from the handle, kids drinking beer, kids drinking crude cocktails from red Solo cups as they mingle in the aisle. Somewhere a sexless conservative is vomiting, and he will never know why.

11:10 p.m.
Some guy in a neon-colored shirt like Undercover Doorman grabs a microphone from the center console. He's apparently our host for the night and tells us where our armbands will afford us free cover. The bus finally rumbles to life, and we roll off UCF property.

11:30 p.m.
We're halfway to downtown. The coach's old, rattling PA blasts some dance-dub-remix I've never heard before. It sounds like Skrillex fucking a swarm of bees. Everyone on the bus is singing along.

11:45 p.m.
Chuck and I finally disembark catty corner from the old Cheyenne Saloon, our drop off – and later pick up – location. Our host beseeches us to "get really drunk and have a good time" and "please take your trash off the bus." Our fellow passengers readily oblige by pelting a nearby concrete bank with bottles, cans and plastic cups – but not before chugging whatever swill remains inside, thus simultaneously obliging the former edict.
They stumble down Church Street, in various states of inebriation and underaged-ness, to disperse on scandalous, even disastrous adventures, and I could only think of one thing: Next time, I'm bringing a fifth.

What did you do last night?
Send us a diary detailing your drunken escapades, along with your first name and age to [email protected]. We won't print your contact info, but we do need to contact you to make sure you're a real person and can verify your story.