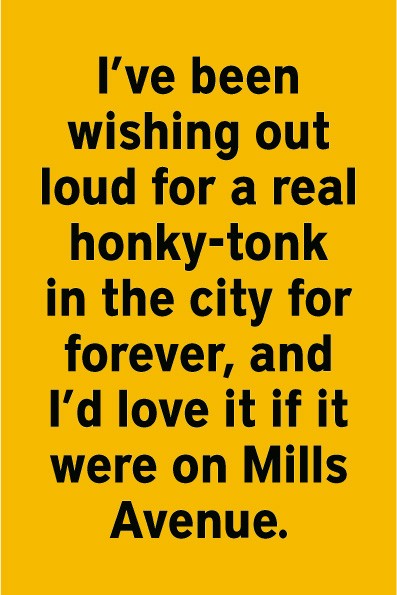 Full event details are forthcoming, but bassist-about-town Phil Longo has confirmed with me that he's miraculously managed to get the locally legendary Heathens – the seminal Post Records band stocked with musical notables like Matt Butcher, Sean Moore (Viernes) and members of Mumpsy – to do a reunion show for his birthday (May 11, Will's Pub). Wow, this coup is a big deal for the many fans who were denied a proper farewell.

Speaking of, I don't know if you've noticed but the Peacock Room's concert calendar has been showing improved consistency and quality recently. I checked in on a special edition of Revival Sun- days, the folk/country night conceived by bartenders Longo and Joe Austin. This one was part of their “Under the Influence” series and honored Hank Williams (March 25). The featured musicians didn't stick exclusively to Hank songs, but the honky-tonk spirit pervaded most of them except, strangely, for local artist Troy Goins, who clearly missed the country-music memo. But Lonesome City Travelers' Scott Metts truly elevated things with a full band that included fellow LCT bassist Justin Martin, Jef Shumard (Big Jef Special) on lap steel and Rick Lane (Oak Hill Drifters, Bloody Jug Band) on harmonica.

Revival Sundays is a cool, free, low-key night where the musicians play in the actual barroom instead of the separate music room. The setup transforms the bar's ambience into a more unified vibe through full immersion with the music, a nice thing when it's this good. I've been wishing out loud for a real honky-tonk in the city for forever, and I'd love it if it were on Mills Avenue. Well, this ain't it, but it's a great night for lovers of the twang.

With a soulful spirit, Sarasota's Villanova Junction (March 31, Copper Rocket) could be something. Their decent songs have a bluesy Southern-rock feel blended with some '60s flair and a pronounced Jim Morrison jones in frontman Ryan O'Neill. They just need to commit, dig in and go bigger. Spending some time in the woods with a big jug of white lightning probably wouldn't hurt, either, to slough off any unessential tendencies and sharpen their vision.

Also playing was Tampa's Y Los Dos Pistoles, whose melodic blend of '90s-style indie rock and folk could be made to matter with some small refinement. Currently, it's basic but unassumingly pleasant stuff. But frontwoman Shae Krispinsky occasionally flashed with some swerving guitar dynamics, and they'd be a whole lot more special if they just jacked up that noise.

Closing was new Central Florida band Fat Night. Frontman Daniel Hanson sent me their song “Cold Feet” to check out and it was a slab of soul-blues sweet enough to intrigue me. But, whoa, they were waaay more funk-jazz in person. Their chops are clear but, sadly, the music is pedestrian. It's not just that it's not my taste, it's that this is the kind of jammy stuff that dominates D-list bars everywhere. And that's not a coincidence. The skill is there but their powers need to be used for good, otherwise it doesn't count.

Also playing were the West Palm Beach twin brothers of the Dewars, whose baked, fried and vaguely psychedelic sound carries echoes of 1960s England. Most importantly, they showed a surprisingly astute melodic instinct for such a couldn't-give-a-shit mien.

I checked back in on Orlando's Bloody Jug Band at their CD release show (March 31, Will's Pub). Although they've gotten better, there's still something about them that doesn't jibe, and it's that they seem more like a product than an earnest band. Their swampbilly aesthetic is more about spectacle, novelty and high gothic camp than the intrinsic virtue of the styles they're emulating. I know and believe in the intricacies of folk music, and it's clear that lots of the nuances of BJB's own instruments aren't honored, like they were there to be seen more than heard. And that's why authenticity eludes them.