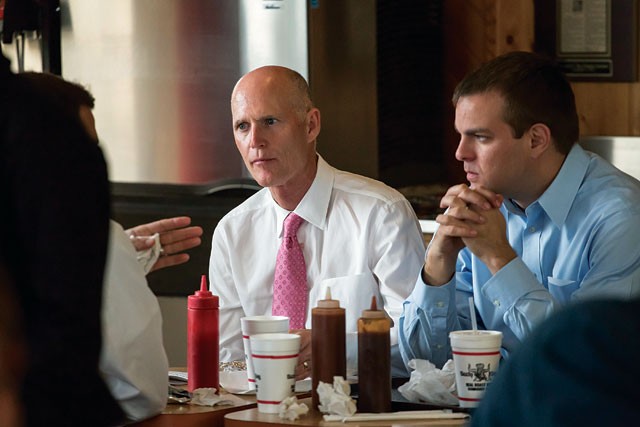 AMOUNT TO BE DRAINED FROM THE UNITED STATES' $3.5 TRILLION BUDGET UNDER SEQUESTRATION

AMOUNT THAT WILL BE CUT FROM FLORIDA'S PRIMARY AND SECONDARY EDUCATION FUNDING WITH SEQUESTRATION, PUTTING 750 EDUCATION JOBS AT RISK.

"AS A NATION, WE CAN'T KEEP LURCHING FROM ONE MANUFACTURED CRISIS TO ANOTHER. MIDDLE-CLASS FAMILIES CAN'T KEEP PAYING THE PRICE FOR DYSFUNCTION IN WASHINGTON." – PRESIDENT BARACK OBAMA ON FEB. 28 Sources: The White House, Miami Herald

So, as you probably know by now – seeing as the nation has been kneecapped into a hobbling mess of unfunded flailing – the U.S. Congress bluffed its way into the Great Sequestration on Thursday when two last-minute volleys from both sides of the aisle failed to bring any sort of bipartisan harmony to Washington, D.C. Surprise! The implications of the failure were writ large by politicians and media outlets alike, but a wet finger stuck into the public wind only seemed to detect a bit of a shrug from regular people. Why? Because it's only the latest in a series of "manufactured" crises to blunt us into news-cycle exhaustion. Wake us up when it's figured out, OK?

But if you were Gov. Rick Scott, a man on the verge of losing a re-election bid because you don't actually cast a shadow, where would you be on the Friday that was supposed to mark the end of the world? Beefy King on Bumby Avenue, that's where. Scott made a tri-functional whistle-stop jaunt through Orlando March 1, where he would "break bread together" (according to a media release) with Puerto Rican business owners on the east side and, in the afternoon, throw a heap of "school recognition" money in the general direction of education at Freedom Middle School out west. Somewhere in the middle, Scott had scheduled a lunch with state Sen. Andy Gardiner, R-Orlando, presumably to talk about pressing issues like ear wax and nose plugs, at the oddly timeless beef-hole with the messiest sandwiches in town. We thought it might be fun to pop by and eavesdrop, but Scott's aide recognized us, so that didn't work.

"Did you know he was going to be here?" she asked us, kind of blankly.

"Yes, you sent a release to all of the media," we answered demurely. "Is he available to talk?"

"No. We have to go to a school right after this." WE KNOW!

Anyway, Scott (with Gardiner in tow) did manage a minor press moment outside with us and Fox 35's Mike Synan, because, you know, why eat at Beefy King if you don't want to be seen as the kind of shirtsleeves guy who eats at Beefy King?

The governor bounded forward with a smile on and told us it was Andy's idea to slum it with sandwiches, and that he did, in fact, enjoy his tater tots and beefycheesething very much, thanks for asking. After a quick acknowledgement of his educational generosity ("We're handing out something like $20 million today," he said nonchalantly), Scott jumped unprompted into the sequestration station. "I can't imagine why the president and Congress are getting paid," he said, repeating his anti-Fed press release from earlier in the week. "We've had to balance our budget for the last two years," he added. ("We need to live within our means" followed.)

Which got us to wondering, which we did aloud, what exactly is the state going to do if the cuts go through? Will it screw up budget negotiations in this legislative session? Is Florida in a superstorm of trouble?

In short, yes, according to Scott. He warned of cuts to the state's military bases and National Guard population, and then took a wild sidestep into the issue of "wildfire season" being just around the corner. The state, said Scott, would have to figure out how to cover those losses.

Might we suggest some beef and cheese? Because basically that's what Gardiner did a few seconds later. Hooray, Florida!