So why is a replica of the King’s Memphis mansion sitting in an Orlando subdivision? 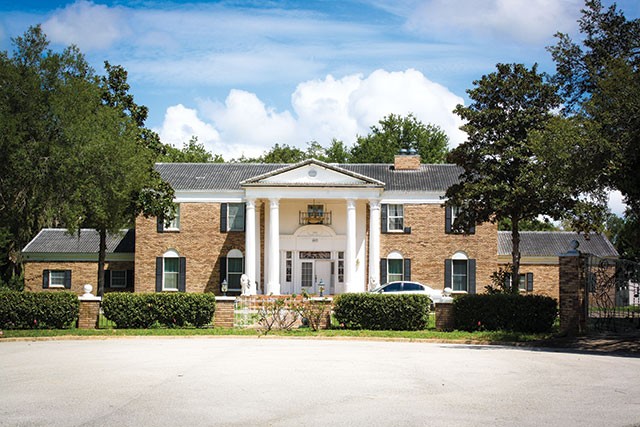 The phrase “hellish grinding” might be too strong to describe the noise the acorns were making under my feet. But the sharp crackling cut through the stillness in the air at Hyland Oaks Estates with enough intensity that I stepped off the sidewalk and walked instead on somebody’s nicely manicured front lawn. Usually when you wander through your average Florida subdivision, you hear some kind of errant noise – kids laughing, the stilted hiss of an angry sprinkler – but this stretch of homes in Pine Hills is tiny and cloistered enough to be movie-lot silent, and I wished to disturb no one. Indeed, a few of the homes on this street look like they were transported directly from a Ward Cleaver wet dream. But one – the crown jewel of Hyland Oaks – is a little different. It looks like it would fit in better on Elvis Presley Boulevard in Memphis, Tenn., than on Pine Street in the Cleaver hometown of Mayfield.

This is the house I’ve come to see.

When you round the main curve of Hyland Oaks Drive, the palace comes into view. Dead center at the end of the cul-de-sac, this bona fide mansion greets the world with a beige limestone facade and Roman columns that frame a double-door entryway. The entire property sits behind a massive fence and is set back far enough to make room for a massive front garden and winding white driveway. Blocking you from strolling up the drive are two massive white gates shaped like books of sheet music. Upon both dance a flurry of black musical notes and matching silhouettes of Tupelo’s most beloved son, Elvis Aaron Presley.

It’s these gates that confirm what you might already be thinking when you first see this opulent manor – it looks just like Graceland.

Orlando’s Graceland replica is a little piece of kitsch buried deep in a cranny the average tourist would never manage to uncover. A collection of recycling bins sitting beneath those white gates are the tipoff, however, that this is a private residence – it always has been – and they’re not encouraging any traffic otherwise.

On this particular day, one of the front gates is wide open, a rare sight based on past visits I’ve made to the home – naturally, it’s the gate boasting the “Beware of Dog” sign. At the end of this specific driveway segment, tucked away under a ceiling of Spanish moss as if to entice would-be trespassers, is an early 20th-century roadster. It’s jet black with a silver grill and immediately brings to mind Baz Luhrmann’s recent stab at remaking The Great Gatsby; the vehicle is too far off to make out any other detail. As I jostle my pants pocket to get hold of my camera, the advertised canine trots into view from just behind the car. I freeze. He’s yellowish, adult and appears to be in the middle of average dog stuff (sniffing, digging, etc.). I realize that if he notices me this could quickly go awry. I don’t have health insurance. This beast is within his rights to attack me. I’m ogling his Roosevelt-era wheels. I turn slowly and pace away, careful not to step on any acorns.

That’s the money quote from Orlando businessman Claude Dowda, he of such vanished landmarks as Sharkey’s Bar & Grill in Winter Park and the Pandemonium Skating Center in Pine Hills, in a 1987 Orlando Sentinel story explaining why he constructed his home as a replica of Presley’s famed domicile. He liked Elvis. (Now, there are a lot of things I like. I like Primus, for example, but I don’t want to build a house that reminds me of them.)

By way of further explanation, he told the Sentinel that he always wanted a “colonial home” and that this was an “important consideration” in his decision to build his imitation Graceland in 1981. According to the Sentinel, it cost him $480,000 to build it. The house thrilled Elvis fans, who flocked to gawk at the home and visit its annual Christmas light display. But, as the newspaper pointed out, the references to Graceland were purely surface. While Dowda went to great pains to ape the King’s original 1939 neocolonial, the interior was no detailed replica of what thousands flock to Memphis each year to experience. Sure, there were ornate fixtures in Dowda’s home, like a shimmering $75,000 chandelier in the foyer and surfaces of lush Italian marble, and one upstairs bedroom was decorated with tropical furnishings to mimic Elvis’s beloved Jungle Room, but most of the interior decoration was Dowda, not Presley. Dowda liked Elvis – he didn’t love him. This could be why the entrepreneurial Dowda, who built several other homes in Hyland Oaks, originally dubbed the whole subdivision Graceland and hung a likeness of Elvis on the Hiawassee Trail entrance. Anyone with true reverence for Elvis probably wouldn’t use his visage in such a gimmicky manner.

One creative liberty taken with Graceland South’s exterior is the pool. Though Elvis himself had a standard oval-shaped watering hole at the original Graceland, Dowda shaped his pool to resemble a guitar. The shimmering blue mass juts into the backyard at a 45-degree angle, and while its proportions might make your average musician cringe, you can’t beat the fact that a jacuzzi makes up the headstock.

It’s an impressive property and a fine monument to our country’s pop-music heritage. But this monument is no park. Throughout its 32-year existence, Orlando’s Graceland has remained a strictly private residence, hidden away from all of Orlando’s other garish tourist delights. In a town besieged with clusters of pop-culture landmarks designed to thrill crowds and make a profit, Central Florida’s ultimate temple to rock & roll’s most iconic personality doesn’t host tours and its owners don’t boast about it in guidebooks. The property does not contain an Elvis museum or an Elvis diner or an Elvis wedding altar, or even a cardboard cutout of Elvis waving hello. The doorbell does not play “Heartbreak Hotel.” The mailbox does not boast a rendering of Lisa Marie Presley’s face. And perhaps the strangest fact of all: No rabid Elvis fans have ever dwelled within our Graceland’s walls. Dowda’s raging “like” for Elvis is as feverish as any resident could muster.

“My Elvis fandom is about the same as the next guy’s,” Peter Acks tells me during an interview in his Winter Park office. He makes a wavering hand motion – the kind somebody makes to let you know that they’re on the fence about something. “Not overly fantastic.”

Acks was a real-estate investor and appraiser in 1994 when he discovered that Orlando’s Graceland was up for grabs. Dowda, facing dicey financial times in the wake of several mysterious fires at his restaurant Sharkey’s, let the house go to Security Pacific National Trust two years earlier (around the same time that Dowda’s son and a few cronies were living alone in Graceland; rumors of drug activity prompted a police raid, and someone was non-fatally shot coming out of the Jungle Room). Interested and intrigued by the lavish mansion, Acks and his wife snatched it up for a mere $200,000, according to property records on file with the Orange County Property Appraiser’s office. At the time the home was not in the best of shape; despite being built to commercial standards, the wooden columns at the front entry were rotting away, and the pool appeared to be murkier than the Black Lagoon. Renovations loomed, but Acks was excited with his unique fixer-upper.

“Where else are you going to find an Elvis Presley house?” he asks, a grin forming under his light-brown mustache. “We had plans for it. My wife had connections at Disney and Universal. We wanted to hire an Elvis impersonator, have a party or two. We were proud of the house.”

Unfortunately, Acks and his wife never even got to move in. Four months after purchasing their Graceland, a wealthy Egyptian named Samir Selim, who was on the lookout for land in America, made Peter an offer for the property he “couldn’t refuse.” The Acks’ dreams of “Return to Sender”-themed dinner parties were set aside when they sold to Selim for $275,000. Selim, who quickly and efficiently implemented the renovations the Acks figured would take years to complete, remained friendly with Acks after the sale and even invited him once to visit him in Egypt.

“Let me tell you, a limo picked me up from the Cairo airport,” Acks marveled, his eyes widening. “Samir’s house had three living rooms and there were servants everywhere. You’d reach for more water and they’d say, ‘Uh-uh, please, allow me.’ I never found out what he did for a living, but … this Graceland property was small potatoes to him.”

Elvis Presley was also small potatoes to Samir Selim. A classical music fan, Selim and his wife, Doria, were looking to unload the home by 1998 (“They will consider swapping [the house] for property in Turkey, Greece or Spain,” the Sentinel blankly noted at the time). In April 2002, Graceland finally sold to Abbass Mohanee for $434,500. He sat on the home for seven months before giving it up to current owner Angelea Harichand for $250,000.

‘Cranky” is one way to describe Harichand’s attitude toward dedicated Elvis fans and curious kitsch freaks (such as myself) who’ve come knocking at her front door. She and her family want to be left alone. They don’t want to gab about Blue Hawaii to every Joe Rhinestone who comes calling. They just want to relax with their pooch and their vintage car and their guitar-shaped pool in relative peace and anonymity. This is disheartening and slightly confusing – until I flex my rationale.

Say I’m in the market for a house. Say I find one that meets my needs, personally and financially. Say the only caveat is that it’s a replica of Wrigley Field. The interior is gorgeous; the entrance just happens to look exactly like the front gate at the home of Chicago’s embattled Cubbies. The real-estate market is wild and woolly. I don’t want to be bouncing around out there too long. The interior is perfect, and I don’t associate baseball with all that is evil and dastardly in the world, so why not? I buy this house and it’s my house. I’m not obligated to give a flying whale taint about the Cubs or any Cubs-related boosters who come knocking. Once I sign the deed, it’s not my responsibility to sit on the front porch and talk about Sammy Sosa with anyone who strolls by. I have the right to be cranky with anyone who shows up carrying a goat and an 8-by-10 of Ryne Goddamn Sandberg. This is my house!

I’m mulling all this on my walk away from the house when suddenly a compact red vehicle comes into view around the corner, headed in the direction of the old Elvisy homestead. The driver, a middle-aged woman who appears to be of East Indian heritage, gives me a half-smile and a wave as her car putts along. I return the greeting without so much as a second thought. I move forward a few paces, but once there’s a tree or two between myself and Graceland, I turn around. The red car zooms through the open gate, which does not automatically close. The woman parks dead center in front of the columns and the steps. She gets out, holding what looks like groceries, and makes it to the doorway before that dopey yellow dog notices and comes running at a brisk pace. She pets him. They go inside.

Elvis has left the building.