The famously reclusive songwriter comes to the Beacham 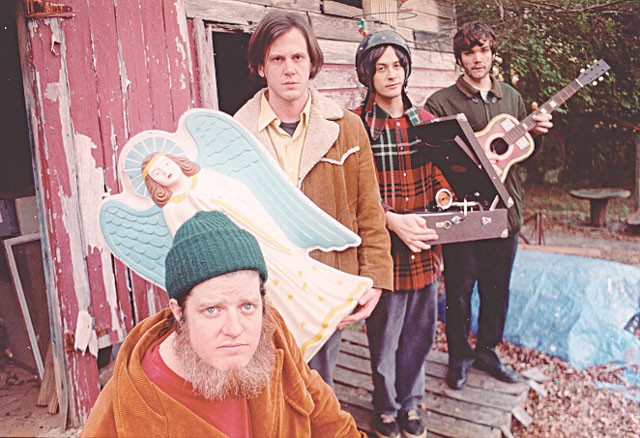 Neutral Milk Hotel auteur Jeff Mangum isn't trying to be mysterious. OK, maybe a little, but it's not like you write one album that is an absolutely amazing groundbreaking distillation of an aesthetic with commensurate emotional poignancy, and then we own you. (OK, maybe we're a little possessive, but we're working on it.)

Think of Mangum as a corollary to Kurt Cobain: a sensitive, wonderfully gifted songwriter who, instead of Thelma & Louise-ing into fatal mainstream popularity, turned the car around and went back home to Athens, Ga. The album in question, for the uninitiated, is Neutral Milk Hotel's In the Aeroplane Over the Sea. Released in 1998, its folky, psychedelic (both sonically and lyrically) paeans display a shambling, ragamuffin charm, sort of like the greatest symphony the kids from Our Gang ever put together.

It's not far from the truth. Mangum's made music since his tweens with Ruston, La., buddies Will Hart, Bill Doss and Robert Schneider. Together they started the Elephant 6 collective, releasing music by themselves and with other kindred spirits drawn to their earnest, psychedelic, richly melodic, '60s-inflected, lo-fi, often folky pop-rock. (Hart and Doss' Olivia Tremor Control, Of Montreal, Elf Power and Beulah were among the other E6 acts, before the collective disbanded in the early aughts.)

"We started recording on boom boxes in middle school. As we got to high school, I rented a four-track with my allowance from the local guitar shop and eventually saved up and bought it," says Schneider, who founded Apples in Stereo and has played on and/or produced nearly all of Mangum's music. "By the time we graduated high school, we had a whole music history of albums and stuff behind us."

Schneider and Mangum played all the instruments on the first Neutral Milk Hotel album, 1996's On Avery Island. By the time it came to write Aeroplane, Mangum had assembled a touring band. They and other friends rolled through Denver (where Schneider was living at the time), with everyone lending parts to the album. Its combination of flourish and simplicity is the tuneful collision of Schneider and Mangum's aesthetics.

"He was especially conscious of not just slickness in a production – but not even a big production," Schneider says. "He wanted things to be very sparse in general and to be very clamorous and noisy. … I wanted him to hear the craziest most underground record he could hear that could contain those beautiful songs and at the same time speak to my ambitions to make the Beatles' Sgt. Pepper's and the Beach Boys' Smile."

The attention the album got seems to have spooked Mangum, who stopped touring – other than the odd performance as a sideman – or releasing music, until recently. (He's reportedly continued to write.) In late 2011, he released a career-spanning box set (two albums, three 7-inches) with an EP of previously unreleased music. In March, he curated one of the annual All Tomorrow's Parties concert series, and now he's on his first tour in 14 years.

"It certainly wasn't purposeful, and I'm not sure he even realized he was being a recluse until it was overwhelmingly the case that everyone was talking about it," Schneider says. "I've known for seven years that he was going to start touring. I didn't know if he was going to actually start doing it, but I knew in my heart that he was working toward it."