A Netflix exec on the new TV ball game 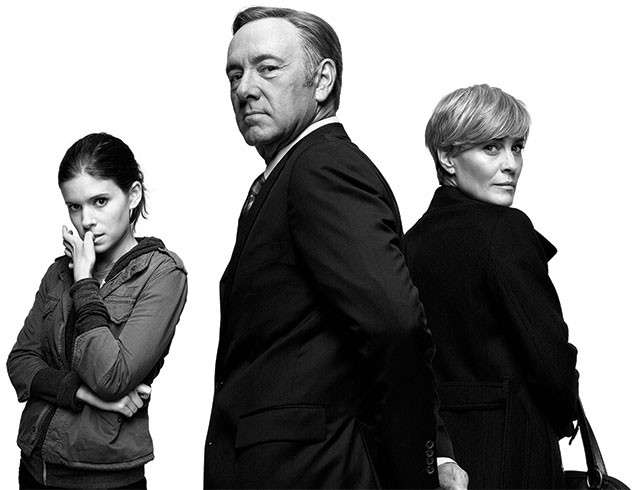 HOUSE OF CARDS: THE COMPLETE SEASON 2

Breaking Bad was an AMC show, but when show creator Vince Gilligan accepted his Emmy for Best Drama at the Emmy Awards, he had someone else to thank.

“I think Netflix kept us on the air,” Gilligan said on Sept. 22, Emmy in hand. “Not only are we standing up here, but … I don’t think our show would have even lasted beyond season two if not for streaming on demand.”

Indeed, the show had been canceled in England after its second season and the same thing almost happened in the United States after the third. So Gilligan’s gratefulness was the ultimate vindication for Netflix, a company that lost 800,000 subscribers and saw its stock plummet by 50 percent after it announced the separation of their streaming and DVD services in 2011.

“That didn’t really bother us,” Netflix chief communications officer Jonathan Friedland says. “It was scary, but that’s the nature of Netflix: We take big risks.”

And the risks paid off. At the last Golden Globe ceremony, Netflix had six nominations (second only to HBO), more than CBS, NBC (five each) and ABC (four). But no risk was bigger than House of Cards, which premieres its second season Friday, Feb. 14. Not only was Netflix’s own top-notch series – based on a 1990s BBC series of the same name – good enough to rival and surpass anything you can watch on TV, the complete season was available in its entirety from the start.

“We’ve learned the lesson the music industry didn’t learn,” Kevin Spacey (who stars as Frank Underwood in House of Cards) said in a lecture in Edinburgh last year. “Give people what they want, when they want it, in the form they want it in, at a reasonable price, and they’ll buy it and they won’t necessarily steal it.”

The new season of House of Cards promises to be even darker and meaner than the first one. Underwood is now the Vice President of the United States (“One heartbeat away from the presidency and not one vote cast in my name … Democracy is so overrated,” he says to the camera), and Molly Parker (Alma Garrett in HBO’s Deadwood) and Sam Page (Greg Harris in AMC’s Mad Men) are the new cast members. But there’s more: Some of the episodes will have director’s commentary available, a common feature available on DVD and Blu-ray.

“We had a big fight about the director’s commentary,” Friedland says. “Some of us think nobody cares about them, and some of us think a lot do care. So [Netflix] said, ‘OK, we’ll do a test. We’ll have David Fincher and other directors do a commentary and see how many people use it.’”

But what about the show itself?

“The different thing this season is that it puts much more emphasis on Claire [Underwood]; she really comes into her own,” Friedland says about the beloved character masterfully played by Robin Wright. When asked about the series killing Congressman Russo (Corey Stoll) way too soon in Season 1, Friedland laughs and warns: “Oh, we loved Russo too, but we’re just going to keep killing ’em off. You have no idea. I’ve seen the first three episodes, and it’s nasty but fun. Just because we like a character, we’re not necessarily going to let it stick around for very long.”

Next for Netflix is to consolidate its streaming of Netflix-produced feature films (which began with the Oscar-nominated The Square and continued with Mitt and the kiddie golf doc The Short Game) and shows like the new exclusive hit Orange Is the New Black. But no other show has created a bigger buzz than the Breaking Bad prequel Better Call Saul, starring shady lawyer Saul Goodman (Bob Odenkirk), which premieres in November. The entire first season of the show – an AMC-Netflix collaboration in the U.S. and a Netflix exclusive in the rest of the world – will stream on Netflix in the U.S. and Canada after the end of its AMC run, and in Latin America and Europe shortly after the U.S. series premiere. And get this: Better Call Saul has already secured the return of Walter White nemesis Mike Ehrmantraut (Jonathan Banks), and Bryan Cranston (Walt) and Aaron Paul (Jesse Pinkman) are willing if not eager to join as well.

“Both Bryan and I want to be a part of that, if they’ll have us,” Paul told Details magazine. “I’d be open to it for sure,” Cranston told Rolling Stone. “It’d be fun to go back into the New Mexico desert and play with my friends.”

So what is it, Mr. Friedland? Will Walt and Jesse be back?

“Oh, man … I don’t get involved in casting,” Friedland said. “But the good thing is that, in a prequel, a lot of people are still alive, so who knows?”