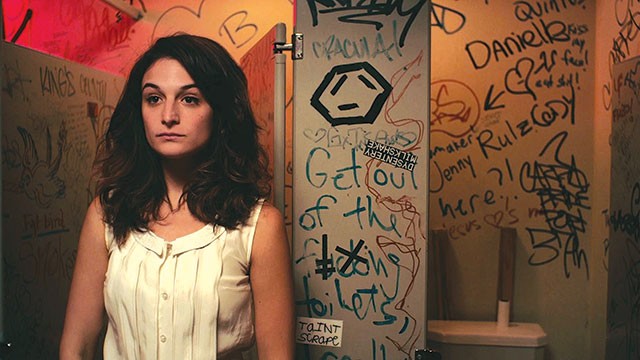 It’s hard to decide whether to criticize Obvious Child for its banal sitcom shortcomings or praise it for its understated (or, in terms of the press, overstated) gutsiness. On one hand, writer-director Gillian Robespierre’s reworked 2009 short film (now padded to be her debut feature) is clumsily scripted, sloppily directed and victim to some of the worst cliches in the rom-com playbook (obligatory gay BFF, saintly bland love interest and silly contrivances). On the other, its low-rent Brooklyn grind feels authentic, its lead, Jenny Slate, is extremely likable and its much-ballyhooed abortion plot is blissfully free of social or political grandstanding (although that lack of agenda might arguably be its agenda).

Slate (whose Marcel the Shell With Shoes On justifies YouTube’s existence) plays Donna Stern, a struggling stand-up comic who likes to overshare at the mic about her love life, vagina and bodily functions. On the precipice of turning 30, she’s a self-deprecating mess who loses her boyfriend and her job at the Unoppressive Non-Imperialist Used Bookstore in the same week. Her nebbishy puppeteer of a dad (the always marvelous Richard Kind) can offer only affectionate moral support. Her successful economics professor mom (Polly Draper) wonders why she’s wasting her 780 SAT verbal score on jokes about pooping her pants. It’s like Louis C.K. meets Lena Dunham’s Girls – but not as clever and incisive as the former or narcissistic and entitled as the latter.

Several weeks after a drunken one-night stand with a charming preppy named Max (Jake Lacy), Donna discovers that she’s pregnant. Single, broke and clearly not cut out to be a mommy, she opts for an abortion. No biggie. Literally. Instead of emotional hand-wringing or embracing some new level of feminine empowerment, Slate’s woman-child calmly makes the unspectacular choice to terminate. And this, amidst the many sitcom contrivances, incites the film’s best scene. Donna comes to her decision during a funny but frank conversation with her roommate Nellie (Gaby Hoffmann). Miraculously, it’s the kind of discussion two young women might actually have with one another, rather than a screenwriter’s well-honed series of snarky talking points.

And that’s Obvious Child’s ultimate strength – it zigs when you expect it to zag. While the meandering plot (a detour with David Cross as a lecherous fellow comic, for example, seems like credit bait) clings to its indie rom-com template, there’s a sweetly compassionate view of Millennial immaturity as it bashes up against the harsh realities of life. No one could accuse Robespierre’s film of being particularly deep, but it is knowing. The filmmaker understands that growing up is lurching and messy, and though Donna and Max’s blossoming relationship strains credibility, the idea that an abortion might actually bring them together is damn near revelatory.

While it’s refreshing to be reminded that for many women the issue of abortion is not necessarily an emotional and religious landmine of self-loathing and doubt, it’s important not to overstate Obvious Child’s daring. There was a time when abortion was, for the most part, a socially accepted option for young women in need. You have only to rewatch Amy Heckerling’s Fast Times at Ridgemont High (written by a young Cameron Crowe) to realize that the insanely popular 1980s teen comedy featured an abortion subplot that barely made a ripple on the cultural front. Obvious Child isn’t reinventing the wheel with its matter-of-fact approach to the issue, but given the toxicity of our current national conversation, it modestly revives the notion that not giving birth is still a choice many women make each and every day.