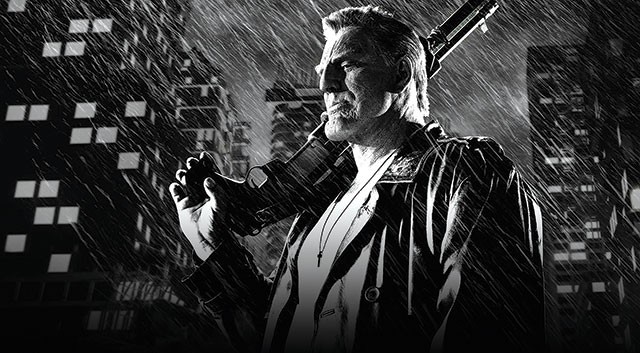 'FRANK MILLER’S SIN CITY: A DAME TO KILL FOR'

Are You Here A new film written and directed by Mad Men’s Matthew Weiner affords us all an opportunity to address the burning issue of our day: Just who came up with the term “midseason finale” anyway, and which methods of lethal injection can we still use on him? Stuck in the middle of an AMC-decreed hiatus, we have to get our Weiner fix via this comedy about a TV weatherman (Owen Wilson) and his author buddy (Zach Galifinakis). When it premiered last year to what the L.A. Times gingerly called a “muted response,” the film was called You Are Here; if it’s a hit in full release, we’ll know that America wants its films to sound like dropped calls, not mall directories. It’s the little things, right? (R) – Steve Schneider

Calvary Reteaming with Brendan Gleeson, the star of his 2011 comedy The Guard, writer-director John Michael McDonagh portrays the drama that ensues after a priest is threatened during confession. With a screening two days before opening, we can’t tell
you exactly what kind of drama, but it’s probably similar to what Sean Hannity dreams of doing to the Pope. (R) – SS

Frank Miller’s Sin City: A Dame to Kill For Rumors that Miller was going to dump co-director Robert Rodriguez to helm this prequel/sequel all by his lonesome died down around oh, let’s say the exact day The Spirit came out. Other fun stuff you should know: Angelina Jolie was supposed to play the title role in Dame before it went to Eva Green; Josh Brolin has stepped into the part played by Clive Owen last time; and the movie’s title was changed from A Dame to Die For. Apparently, to modern focus groups, murder is OK but suicide is a no-no. And mall directories still suck. (R) – SS

If I Stay Oh, goodie: more mortality porn. Chloe Grace Moretz gets plunged into a coma and has one day’s worth of out-of-body flitting about to decide if she wants to rejoin the land of the living. (Hey, do you think she knows how Mad Men turns out?) The only reason I’d go near this apparent hunk of Kleenex bait is that it was directed by R.J. Cutler, who worked on the excellent reality series American High with late UCF professor Jonathan Mednick. Miss ya, Jonathan! And tell Chloe that nobody down here blames her for Dark Shadows. (PG-13) – SS

When the Game Stands Tall … he sure makes Weezy look like a bitch when it comes to throwing three-pointers, nyuk nyuk! Actually, this sports drama is about high school football, not hoops, and it stars Jesus-turned-Person-of-Interest Jim Caviezel as a real-life coach who took a California team to a record winning streak. Son of a bitch, I think I nodded off just typing that. (PG) – SS