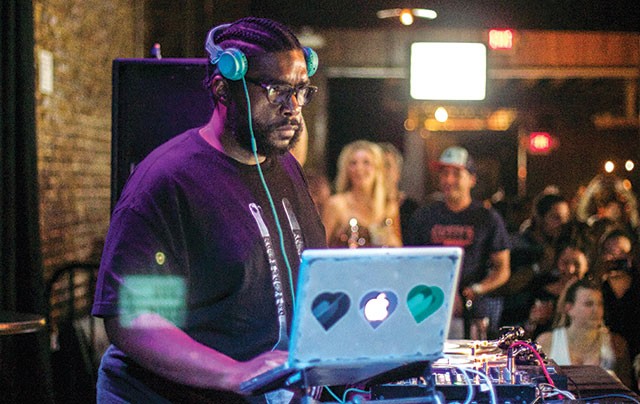 Has everyone regained your breath and cleaned off yet from Jimmy Fallon’s crew descending upon Orlando last week? For music heads, the hottest ripple was Questlove basically receiving mail here for three straight nights on the turntables (June 17-19, the Social).

Regarding Questlove’s table technique, well, his tombstone doesn’t need rewriting quite yet. Although he’s a solid and inventive mixer – in other words, not Paris fucking Hilton – he’s more of a butter-spreading groove-rider than a hot-cutting trickster. But even though he won’t be lighting up any DMC battles any time soon, he did showcase an exceptional song library, construction creativity and an aficionado’s selection on the Michael Jackson-themed night I attended – mixing, mashing and reworking MJ all up and down with what sometimes sounded like rare outtakes blended in. It was a dope party with some legit stardust. And it drew lots of Orlando’s most credentialed DJs – literally generations of them dating back to at least the big ’90s house boom, according to my count.

It’s a daring, golden time for metal right now. Due to some great work by a new generation, the genre has moved up in recent times – past niche and stereotype –and into the most exclusive chambers of rock-snob hearts everywhere (Awwww). And perhaps no band has been as vaunted in the past year as San Francisco’s Deafheaven (June 16, Backbooth). Their merge of black metal, shoegaze and post-metal is frequently cited as one of today’s most groundbreaking sounds. And they’re mostly equal to the hype, especially live, where their relentless and grand storm expands heavy metal’s possibilities to express beauty in surprising and singular ways. And even if he is kind of like the Chris Martin of black metal on stage (that clacking locomotive you hear is all the metalheads now Googling to see who the fuck Chris Martin is), all of Deafheaven’s flair and widescreen drama is embodied in singer George Clarke, who is a powerful and iconic performer. As long as their searing sonic blitz is met by the rage and release of a loaded house like this one, their show will always be a true happening.

Dream house: Photos from Deafheaven and Pallbearer at Backbooth

Extra credit goes to Deafheaven for drawing a crowd that was notably attentive and receptive to openers that were nothing like them. In fact, fellow Californians Wreck & Reference are unlike practically everybody else out there, with a convention-bucking post-metal template that synthesizes black metal, noise and dark electronic experimentation. Furthermore, unlike even many of their fellow genre jailbreakers, their sound isn’t about density and crush. It’s rendered instead with space and atmosphere that’s atypical of heavy music.

Live, the duo rocks drums and (gasp!) a pad with buttons instead of the typical guitar. With an arrangement like that, you can already hear the groundswell of purist belly grumbles rising. Although not exactly full-body gripping, their set was at least intriguing.

Brooklyn’s Bear Hands, in case you don’t recall, were stragglers to the great indie bear-band rush some years back. Their 2010 debut LP, Burning Bush Supper Club, was an exceptional work of wiry pop dynamism that kicked up a bit of subterranean noise, but then they sort of disappeared. After years of writing and heavy support touring, they reemerged this year with Distraction, an album that’s a more centrist recalibration of their sound. Everything about their latest show (June 17, the Plaza Live) reinforces this pivot: It was big-sounding, direct and in support of the venue-packing Cage the Elephant. But the good news is that this new direction still has all the shine that makes Bear Hands special. Even though their earlier obliqueness made them more interesting, their pop acuity was really their main currency. Well, that’s still in effect, and they’ve never sounded better on stage.

As for headliner Cage the Elephant, wow, the amount of live rock & roll heat these Kentucky boys pack is sort of astonishing, especially from frontman Matt Schultz, who’s a little firecracker with glam-sized stage presence and all-out performance style. Their aesthetic – millennial pop sharpness with ’70s grandeur, splashed by everything in between – is dizzyingly hodgepodge, but they rock it single-mindedly hard with a huge and hitting live show.

Shake me down: Colorful photos of Cage the Elephant at the Plaza Live