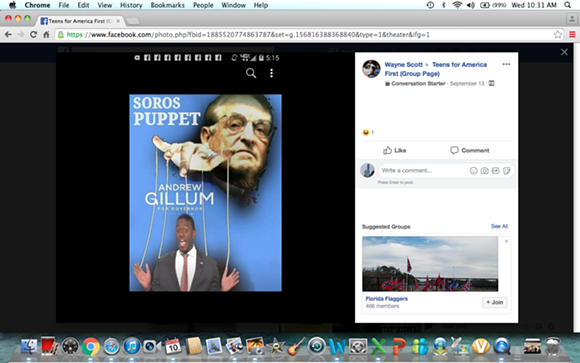 Several local elected Republican officials are members of a Facebook group called Teens for America First, which is littered with racially charged and anti-Semitic content, including a post in which one member suggests the Jewish people are to blame for the Sept. 11 terrorist attack.

According to screenshots provided to Orlando Weekly, state Rep. Mike Miller, R-Winter Park; state Rep. Scott Plakon, R-Longwood; state Rep. Bob Cortes, R-Altamonte Springs and Seminole County tax collector Joel Greenberg are all members of the group. Teens for America First, which is private, describes itself as "a President Trump-inspired, conservative group founded to advance the America First Agenda, to reclaim America's future, and to preserve her past."

Other screengrabs of posts provided to Orlando Weekly include a post listing "Muslims Running for Political Office" for no apparent reason, in which one commenter calls on the candidates to "renounce their faith"; a post in which one commenter suggests putting Democrats to a "firing squad"; memes celebrating the idea of Supreme Court Justice Ruth Bader Ginsberg's death; and a post, included at the top of this article, that portrays George Soros as Democratic gubernatorial candidate Andrew Gillum's puppeteer – a well-worn anti-liberal trope.

Screengrabs of the aforementioned posts are included below.

Miller, who's challenging Democratic U.S. Rep. Stephanie Murphy for her congressional seat in the November general election, is also included in an interview with the group's administrators:

"Mike condemns the racist remarks and other disturbing posts on this Facebook page and has removed himself from the Facebook group," Miller's campaign spokeswoman Dana Loncar tells Orlando Weekly.

Asked for comment on the posts, Cortes says he doesn't subscribe to groups on his personal page. "Most of these groups, I was added by someone else," Cortes says, referring to how Facebook allows users to add others to a group. "That doesn't mean you agree with the views on the particular page. I'll be cleaning up my [Facebook], as I don't use my personal page for group discussions."

Plakon and Greenberg did not immediately respond to our requests for comment. 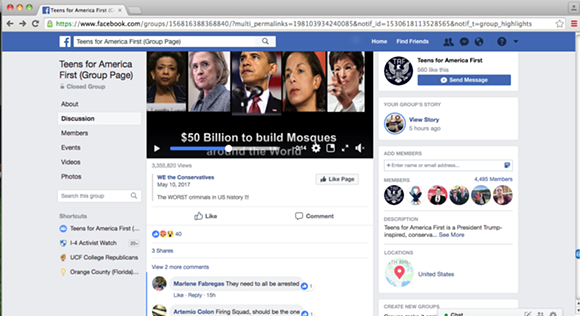