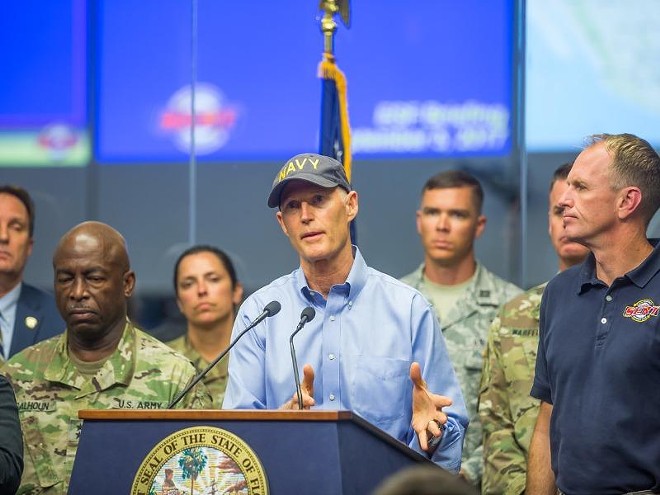 Photo via News Service of Florida
Gov. Rick Scott on Monday warned residents of the Panhandle and the Big Bend region to “seriously” plan for the impact of the rapidly developing Hurricane Michael, which is expected to reach Florida by mid-week with maximum sustained winds of 100 mph.

“You’ve got to take care of yourself,” said Scott, sporting his faded Navy baseball cap that has become a hallmark of his past emergency attire, after a briefing at the Bay County Emergency Operations Center in Southport.

Scott said emergency officials are “doing everything they can to get everybody ready.” But, as Michael is expected to bring storm surge, rains, flash flooding and tornadoes, Scott said the storm’s northern speed through the Gulf of Mexico is different from hurricanes that have hit Florida the past couple of years.

“This has been different from a lot of the storms we’ve seen since I’ve been governor. It’s fast, this is coming very fast,” Scott said. “It could speed up. It could slow down. We don’t know. And we don’t know exactly where it’s going to hit yet.”

The National Hurricane Center expects Michael to move inland in the Panhandle or Big Bend on Wednesday, and then move northeast Wednesday night and Thursday across the Southeast U.S.

“Steady to rapid strengthening is forecast during the next day or so, and Michael is forecast to become a major hurricane by Tuesday or Tuesday night,” the National Hurricane Center said Monday morning after receiving data from an Air Force Reserve Hurricane Hunter aircraft.

Mark Wool, warning coordination meteorologist for the National Weather Service in Tallahassee, said the storm will be more damaging than Hurricane Hermine, which hit Tallahassee and other areas of the Big Bend in 2016.

“Hermine was a marginal Category 1 storm. We are talking about a significantly higher level of wind,” Wool told The News Service of Florida. “In Hermine, it knocked power out to part of the city (Tallahassee) for a week. There are a lot of trees, not just in Tallahassee, but in all of the surrounding parts of the Big Bend, up into Georgia and over the Panhandle. So, power outages should be expected, and they are going to be of a lengthy duration.”

Wool raised concerns about potential storm surge in Franklin County’s Apalachee Bay, which he described as the “second-most vulnerable stretch of coastline in the entire nation for storm surge, because of the shape of the coastline. It funnels the water right up in there.”

Hermine made landfall in the St. Marks area and moved north through Tallahassee. While it remains unclear where Hurricane Michael will hit, Wool said it would be more powerful than other storms that have damaged the eastern Panhandle and Big Bend.

“There hasn’t been a major hurricane landfall in that part of the Florida coastline since the late 1800s. So, no one alive in this part of the world will have experienced a hurricane of this strength in this part of the state,” he said. “If you think, ‘Oh, I rode out Hermine and I can handle it this time around,’ you might want to reconsider for this one.”

As of 11 a.m. Monday, Michael was about 140 miles east-northeast of Cozumel, Mexico, and 50 miles from the western tip of Cuba.

The storm, moving north at 7 mph, had maximum sustained winds of 75 mph. The National Hurricane Center anticipates the northward motion to pick up through Tuesday night, with a northeast shift expected Wednesday and Thursday.

On Sunday, Scott declared a state of emergency for 26 counties in the Panhandle and the Big Bend, which generally includes areas surrounding Tallahassee.

The state has activated 500 members of the Florida National Guard and has another 5,000 on standby. The Florida Fish and Wildlife Conservation Commission has also designated 40 law-enforcement officers for rapid deployment.

Scott said he also wants local governments to confirm that mutual-aid agreements with electric utilities have been signed so there is no delay in power restoration.

In 2016, Scott clashed with Tallahassee Mayor Andrew Gillum, now the Democratic candidate for governor, over the city’s response to Hurricane Hermine.

Late Sunday, Gillum’s campaign announced he scrapped campaign stops planned Monday and Tuesday in South Florida to return to Tallahassee to “focus on preparing the city of Tallahassee and residents” for the storm.

Gillum's mayoral office separately sent out a release that said he "reached out to Governor Scott with an update on the city’s efforts."

Republican gubernatorial candidate Ron DeSantis tweeted that he was redirecting his “Panhandle campaign staff and volunteers to help prepare their communities ahead of the storm.”

Counties along the Gulf Coast were expected to discuss evacuations later Monday.

A storm-surge watch, indicating rising water moving inland within the next 48 hours, is in effect from Navarre to Anna Maria Island, including Tampa Bay.

The National Hurricane Center projected the storm to dump four to eight inches of rain across the Panhandle and Big Bend, with some isolated maximum amounts of 12 inches.

On its current path, Michael could create surges of seven to 11 feet from Indian Pass to Crystal River. The surges would diminish further away from landfall, but even the Florida Keys could get up to four inches of surge.

With agencies preparing for the storm, the Florida Department of Law Enforcement said a meeting this week of the Marjory Stoneman Douglas High School Public Safety Commission had been canceled. The commission, formed after the Feb. 14 mass shooting at Marjory Stoneman Douglas High School in Parkland, had been slated to meet Tuesday, Wednesday and Thursday in Broward County.

Also, Florida State University said in a tweet that it will close Tuesday through Friday.
© 2022 Orlando Weekly