For Disney-goers, Enzo’s Hideaway is an alluring place in which to get lost 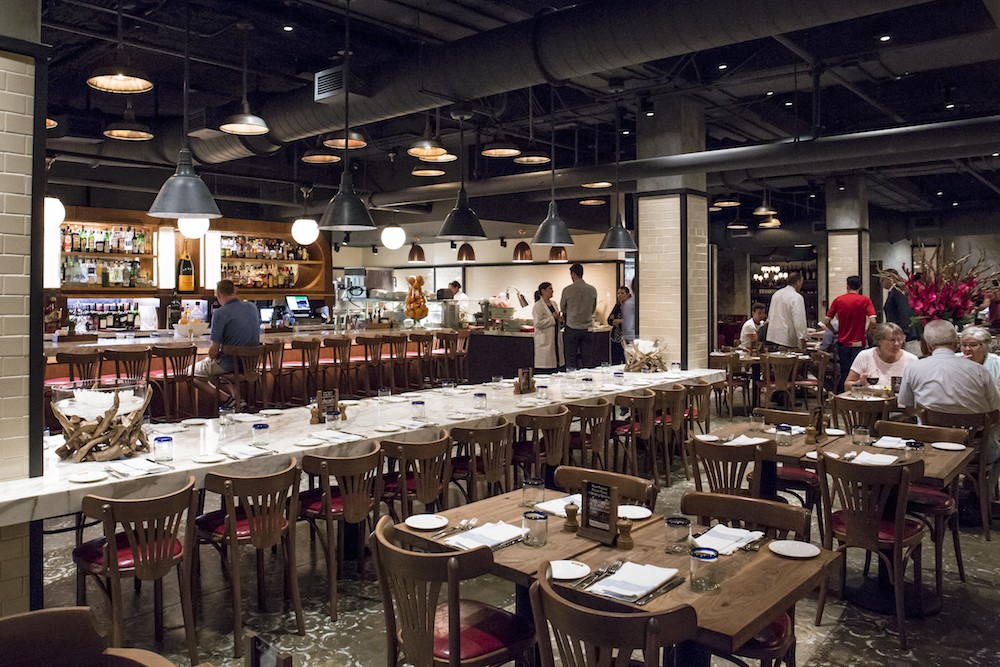 Beneath Maria & Enzo's, the arresting ristorante inside a former 1930s airline terminal, sits an underground, Prohibition-era, rum-running tunnel, which the no-last-name bootlegger Enzo happened upon one day and duly transformed into a subterranean grotto for guzzlers and gourmands.

While the preceding bit of fiction is brought to you by the writers "imagineering" the backstories at Disney, there's something quite un-Disney about Enzo's Hideaway.

Tragically hip this place is not. Not with the profanity-free wall of faux graffiti and all the young, visa-holding Italian waitstaff scurrying about the moodily lit, Deco-styled speakeasy. They're a harried bunch, squawking at each other, neglecting to set utensils at our table, confusedly bringing the wrong dishes, then brusquely shoving around plates when our orders were ready. "It's my first day to wait tables," said our wide-eyed and eager server. "For many here," he gestured, "is their first week." Well, that explains it, I thought to myself as we summoned the neatly dressed sommelier.

Recommendations were chewed on – as was warm and wondrous focaccia bread baked with red and yellow cherry tomatoes – before we threw caution to the wind and settled on a bottle of Bastasiolo Barolo Riserva 2007. While it breathed, we barely came up for air after diving into a more dolce (sweet) than agro (sour) verdure agrodolce ($13) of romanesco, roasted cauliflower, green beans, pine nuts and golden raisins. The rustic start gave way to a Roman follow-up with arancini-like suppli' ($14), two fulfilling orbs filled with wee bits of Parma ham, peas and taleggio cheese.

The menu is pleasingly focused (read: short), which made the selection of mains quite easy. Pasta was a no-brainer, but it'd serve the restaurant well to pay more mind to the noodles, which aren't made in-house. For such a tight menu, noted chef Theo Schoenegger, who earned a Michelin star at Patina Restaurant Group's flagship restaurant Patina inside the Walt Disney Concert Hall in L.A., could certainly make the effort. What we got with the spaghetti tre formaggi ($22) was a textural fail. The spaghetti is thicker (spaghettoni perhaps?) and when tossed in three cheeses – pecorino romano, caciocavallo and Parmesan cream sauce – made for a mouthfeel both mealy and blah.

For nearly double the price, you can forgo the pastas and dine on a far more satisfying bistecca pizzaiola ($43), a perfectly cooked Black Angus strip topped with a perfectly thickened sauce of tomato, capers, oregano and chilies. The steak was served with a side of roasted carrots and, together with that Barolo, really put us in our happy place. A big ol' house-made cannoli ($9) with a cracklin' good shell soon followed, then a square of tiramisu ($12) with a not-too-cakey, not-too-creamy composition.

After being served a complimentary glass of Amaro Montenegro, we settled up and thought to explore the restaurant on our way out. The stylish bar could very well be one of the most inviting on Disney property, and if you're a tippler, do give their rum selection a look. Next to the bar sit coolers full of meats and cheeses and beyond that, in the back of the restaurant, a small dining nook, its walls lined with wine bottles. There was a door back there that led into a small empty hallway with more doors. We walked through one of them and found ourselves in the belly of the bustling Edison, another Patina-run restaurant. Say what you want, but getting lost inside these ersatz tunnels is anything but a bore.