500 days of suck: A list of the Trump administration's greatest hits (so far)

Photo via Steve Jurvetson/Flickr
We are 500 days into the Trump administration. A year and a half ago, it was hard to conceive of the possibility that we could last 500 days with this maniac in office. “I have a much greater sense that it is hard for a president to directly fuck up/fuck with the mechanics and contours of my life,” Mary Finn, who helped create the Democracy in Crisis column, wrote in a recent text. “But it is very easy for the president to destroy the lives of people without as much power and money as I have.”

So the people who are not being deported, detained or separated from their children by ICE can get weary and stop paying attention.
click to enlarge 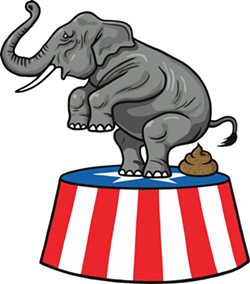 The people who aren’t still being prosecuted for protesting the inauguration can afford to feel indifferent again. And those who are not attacked, doxxed or otherwise harmed by the racists and white supremacists emboldened by the president can afford a certain distance, while enjoying the frisson of seeing the next horrible tweet by Trump dissected on MSNBC.

Still, I recently listened to the Slate podcast “Slow Burn,” which tries to rediscover what it felt like to live through Watergate, when you didn’t exactly know yet what would be important or canonized by Robert Redford and Dustin Hoffman. And things have been moving so fucking fast for the last 500 days that you can feel the historical memory slipping away all the time. And maybe we need to. “That’s a terrible idea for a column,” my wife told me. “No one wants to remember.” But I couldn’t help it. I wanted to try to remember some of the moments that seemed significant and then disappeared in the onslaught of events.

THE REIGN OF SEAN SPICER’S SPIN MACHINE
Spicey started out wild and crazy, scolding the press for accurately portraying the size of Trump’s slightly small inaugural crowd. That same press, which was lionized for reporting something closer to the actual number of attendees, failed to mention the large number of people – more than 200 hundred – being criminally charged for a few broken windows. But America was obsessed with Spicer’s press conferences. They blew away all other daytime ratings and regularly broke records as the Spice Boy toyed with the truth. When I was growing up, they imploded a building downtown and watching it on television was thrilling. It just collapsed. It was like that. The dirty secret was that he wasn’t creating some new level of obfuscation and disinformation – but that we was doing what local flacks do everywhere and openly lying to the press. After he got fired, he was feted by Hollywood and Harvard alike. Fuck them, and fuck him.

DESCENDING THE RABBIT HOLES OF META TWITTER THREADS
I work at a place where there are people who are obsessed with debunking the myth of collusion in a horribly annoying way. It’s essentially media criticism masqued as white collar reporting. But it is an honest reaction to the feverish punditry that sees Putin’s face in every piece of toast and spins out grand narratives explaining everything with maps and airline flight paths and sealed indictments and game theory. After a few dozen linked Tweets, you either felt like we were certainly doomed or that we were on the verge – at this very moment! – of defeating the vile conspiracy, whether it be Putin or the Deep State. It isn’t like these threads have gone away, by any means; it’s just that they’ve lost all their meaning.

CARING ABOUT TRUMP’S TAXES
Remember when Rachel Maddow had a whole special reporting on a single page of Trump’s tax returns? It felt for a moment like a big national event – and it was nothing. And he still has not released his taxes and no one has leaked them and most people have stopped demanding them. No president will probably ever have to release taxes again – most want to hide how rich they are. Trump probably wants to hide bad loans and the fact that he isn’t as rich as people think. “Why don’t news reporters call him an alleged billionaire?” my cousin and political advisor, Michael Woods of Knoxville, Tennessee, asked me recently.

WAITING FOR THE “BLUE WAVE”
The dumbass Democrats “avoided disaster” on the big primary day – especially in California – last week, as news organizations all over reported. But wait, it’s a primary, right? How does a party face disaster in a primary? By electing candidates “they” think can’t win. The Democrats haven’t learned shit. Here’s how NPR laughably cast it: “Tuesday night's results by no means mean taking back the House is assured for Democrats. In fact, indicators have moved the other direction over the past several months. But Tuesday night could have made things far worse – and they didn't, which means Democrats have to be breathing a sigh of relief.” Democrats are back in the position of declaring dubious victory for preserving their weak status quo. People can’t predict the future but the Democrats will not take back either the House or the Senate. Even under Trump. That’s how bad they suck.

HASHTAGGING THE RESISTANCE
In our new new Trumplandia, the only thing more invisible than the Blue Wave is the #Resistance. Sure, the hashtag is still far too common on dumb Twitter threads but any sense of actual resistance by anyone in power – and even people not in power in any organized way – is out. Where are the pussyhats and the marches and the glitter dance parties in front of McConnell's house? Many of the people who get fucked by Trump’s policies are too poor or harried or hounded to go to D.C. to protest. But every week, both in the District and in more than 30 cities and towns around the country people are protesting and getting arrested as part of the Poor People’s Campaign. The heroic National News ignores it for another tweet.

LIBERALS SEEK SALVATION FROM NEVER TRUMPERS
The #Resistance is just an excuse to move away from #BlackLivesMatter and feel like a hero for just not being as bad as Trump, while the #NeverTrump movement is a collection of people who value an orderly conservatism that more carefully disguises its fascistic tendencies. For a brief while, people like David Frum and Tom Nichols became heroes of this Twitter resistance. They’ve done nothing but tweet and talk against the Trumpers. Not a one has stopped someone from being illegally arrested or deported. Paul Ryan is seen as a dissident for suggesting that Trump should probably not pardon himself.

SO MUCH MORE
Remember when Sam Nunberg went crazy on TV? That was wild. There’s also missing/fake Melania; movie villain advisor Sebastian Gorka; fast-talking fucker Scaramucci; Sheriff David Clark; good old Louise Mensch. A lot of these people will be forgotten. Some will come back. Others, like Mike Flynn and Paul Manafort, will forever haunt us. The one thing we’ve learned over the last couple years – things can always get worse. I’m out of words and there are so many more things.
© 2022 Orlando Weekly