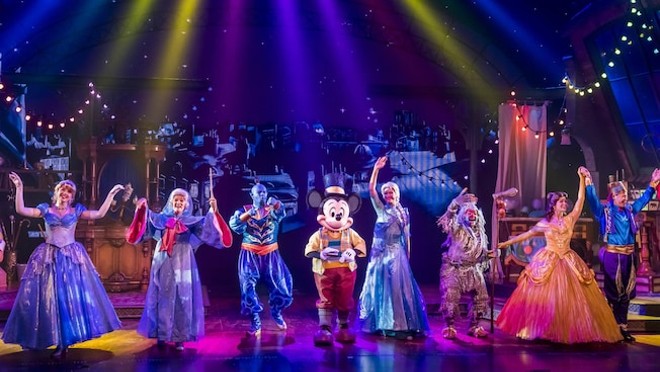 During his visit to Disneyland Paris, Kalogridis previewed the Ratatouille ride that is now under construction at Epcot and saw the popular Mickey and the Magician stage show.

According to those who were at the event, Delcourt seemed to imply that Kalogridis showed interest in bringing the Walt Disney Studios Park stage show to Walt Disney World. Soon after the news broke, many English-based bloggers promptly backtracked on it over concerns regarding the French-to-English translation and confusion over whether Delcourt was speaking about the stage show or the Ratatouille ride.

While many American-based Disney sites were left questioning their French, Disneyland Paris historian and Disney and More author Alain Littaye, who was at the event, doubled down on his understanding of the statements. Posting both the original French, Littaye’s native language, and an English translation, Littaye attempted to clear up any confusion regarding the announcement, but by then many other Disney news sites were too busy backpedaling their original stories to pick up on the update.

The literal translation of Delcourt's comments, as translated by Littaye and posted on his Disney and More site, still isn’t completely clear but it does point to Walt Disney World at least expressing interest in the groundbreaking stage show:

It’s not likely the stage show would head to Kingdom or Epcot, leaving only Hollywood Studios as a contender.

At Hollywood Studios, there are four possible locations for the show, with three of the four rumored to be getting updates in the coming years. The Hyperion Theater currently houses the top-rated Frozen sing-along show. That show could move theaters, but with other much less popular shows around the this seems unlikely.

Over on Sunset Boulevard, the Beauty and the Beast stage show is expected to be updated in the coming years, though the Mickey and the Magician show features large video screen backgrounds that wouldn’t be preferred in the outdoor theater setting. Some have speculated that Disney could enclose the theater, but with three other enclosed theaters at Hollywood this doesn’t seem likely.

The Voyage of the Little Mermaid puppet-based show has been rumored to be on the chopping block for at least six years now, with rumors ranging from a Phineas and Ferb show to one based on Tangled. Mickey and the Magician would likely require a full remodel of the stage and a redo of the theater, but otherwise, this setting seems like one of the more ideal ones in the park. The Voyage of the Little Mermaid is an incredibly dated show that rarely sees any type of significant demand.

Just across the courtyard from The Little Mermaid is the Disney Junior – Live on show. That show should close later this year as the nearby Club 33 construction ramps up, but there might still be enough room for a new stage show to also fit into .

Both The Little Mermaid and the Disney Junior locations are just next to the Chinese Theater where a new Mickey Mouse themed dark ride is currently under construction. By having the new stage show nearby the area would essentially become a Mickey Mouse focused mini-land with the award-winning stage show, a dark ride, and the Walt Disney Presents gallery. It would also draw guests away from other new areas in the park, including Toy Story Land and Star Wars: Galaxy’s Edge.

If the rumors are correct, we could be getting a major Mickey Mouse presence at Hollywood Studios just in time for the 50th Anniversary of WDW in 2021.