Fringe 2018 review: Revival of Michael Wanzie's 'Monorail Inferno' gets its most lavish mounting ever 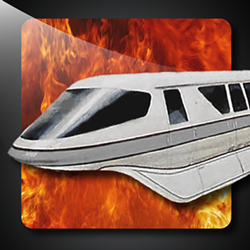 On June 26, 1985, Monorail Silver caught fire outside the Magic Kingdom, forcing guests to kick out the car’s windows and climb onto the roof in order to escape the smoke and flames. Soon after, playwright Michael Wanzie transformed Walt Disney World’s near-tragedy into a disaster-movie spoof during a self-confessed cocaine bender, and he’s revived it in every decade since. Now, Wanzie’s original unrevised Monorail Inferno is getting its most lavish mounting ever at the Fringe, but despite boasting some of our town’s top talent on- and back-stage, this didn’t turn out to be the E-Ticket I was expecting.

Female impersonator Divine Grace plays plaid-clad VIP tour guide Allison, who is trapped on the iconic elevated train with a cast of stock characters straight out of an Irwin Allen melodrama: there’s the hyperactive child (Darby Ballard), the busybody housewife (Gidget Galore), a frustrated theme-park choreographer (Jessica Hoen), yada yada yada. Since in this retelling the monorail is merely stalled and not smoldering, the passengers spend nearly 90 urgency-free minutes (twice the length of the actual incident) rehashing their intimate secrets with total strangers.

Director Kenny Howard does his Broadway best to make a stage full of seated actors visually exciting; the flashlight-lit title number and a Tom Lehrer-esque Vatican tap routine (featuring Wanzie himself in a mitre hat) are especially memorable. Rich Charon’s pastiche synthesizer score sounds swell in the hands of singers like Chad Lewis, whose surreal swan song is surprisingly moving. And thanks to the D Squared prodcution design team (Rich Kuntz & Douglas White , Marcy Singhaus & Chad Pace) the show looks superb, down to the period WDW logos on the monorail seats.

The preview performance I saw suffered some major miscues, which the cast recovered from with aplomb. That doesn’t excuse the script’s uncomfortably uneven tone, which swings wildly from outrageously dated slapstick straight out of Airplane to maudlin moralizing on social issues, including a saccharine anti-abortion song. Once the Mickey-mocking quips took a backseat to clichéd inter-character conflict and deus ex machina explosive devices, I more or less checked out. Kudos to the cast and crew for their A-plus efforts on C-minus material, but my disappointment only demonstrates how much Wanzie’s work (and thus our expectations for it) has grown over the past 30 years.

5 articles
Check out ALL of our Fringe 2018 reviews at orlandoweekly.com/fringe2018
© 2022 Orlando Weekly