Cristian Toma, co-founder of Orlando-based Eco Convergence Group, hands me a pair of shoe coverings, a hair net and a white lab coat prior to entering the HyCube – a 2,000-square-foot self-contained hydroponics box situated on the sprawling grounds of the Orlando World Center Marriott.

We stand like irradiated victims of fallout under the vents of a mounted air conditioning unit for an "air wash," then step through the invisible wall and into a gleaming white room in full view of 21 LED-illuminated towers stacked with leafy greens.

It's all an effort to keep contaminants out of the ultra-hygienic environment, where everything from temperature and humidity to light intensity and nutrient recipes is strictly controlled to create ideal plant-growing conditions.

This is vertical farming, the hottest trend in hyperlocal horticulture and one that's seen traction in larger urban centers because of its sunless, soilless, indoor-friendly, year-round approach.

In a world where the need to grow upward rather than outward becomes increasingly crucial, vertical farms level up by maximizing growth space and plant output, allowing for produce to be grown anywhere where demand lies. Plus, they do so in sustainable fashion and without the added costs and inefficiencies of food transportation.

With the door to the hotel's main restaurant – Latitude & Longitude – situated just outside the entrance to HyCube, the carbon footprint is practically negligible.

"We call it pick to plate," says Toma, "and this HyCube installation will cover most, if not all, of the hotel's needs for lettuce. We're talking well over 100,000 heads of lettuce being produced here per year, and 13,000 pounds of herbs, greens, and edible flowers."

At any time, the vertical stacks host between 15,000 and 25,000 plants depending on the variety, not counting microgreens and baby leaf greens, all the while consuming less water and using less space than conventional outdoor and greenhouse farming.


Produce cultivated through vertical farming methods not only has shorter crop cycles, but year-round crop cycles. Because temperature, humidity, light and nutrient requirements are consistently met, crops normally limited to specific growing seasons or regions can be grown throughout the year.

Seasonality is a non-factor for Latitude & Longitude. Rather, crop selection is based entirely on restaurant needs and chefs' menu plans.

An automated nutrient leaching system pumps a proprietary solution of more than 10 nutrients to feed the plants, and does so without discharging any waste. The HyCube's recirculating hydroponic systems use less than two gallons of water to produce one fully grown head of lettuce. By comparison, conventional lettuce farming uses an average of 12 gallons.

Faiyaz Kara
Cristian Toma (R) leads a group through the HyCube™ facility
Toma, a scientist and engineer in the biomedical industry, and his late business partner, Cristian Ivanescu – an engineer in the semiconductor field who passed away in December of last year – used their experiential knowledge when founding ECG and developing HyCube. "We combined semiconductor cleanroom environment technology related to climate and temperature control with plant science," says Toma. "Plus we have some proprietary nutrient solutions and a cultivation management aspect designed to maximize nutrient uptake by the plants."

All the parameters that are ideal for plant cultivation are set and monitored in a data-driven production system which, Toma says, makes for happy plants. "Our plants are happy and when they're happy, they eat a lot and when they eat a lot, they grow."

Faiyaz Kara
All aspects of HyCube's™ environment are closely monitored
The more than 500 linear GreenPower LED light modules, for example, only emit blue and red light as plants absorb and use only those colors of the spectrum to grow.

"It's one way we maximize the energy consumption — by optimizing the light spectrum," says Toma. "We know how to handle control environments and clean rooms and we applied that knowledge to our installation. Now we have a patent pending design of both the rack system and the waterflow system."

So, why vertical farming? For one thing, people need to be fed. With the world's population expected to near 10 billion people by 2050, more than 6.5 billion of whom will live in urban areas, vertical farming's flexible, modular, space-saving set-up isn't just attractive, it's necessary.

The world's first commercial vertical farm – Sky Greens – opened in land-scarce, densely populated Singapore in 2012, and they've sprouted up all over the world since then, from food deserts to Arabian deserts.

But beyond the need to feed, the consumer trend toward clean eating has played a factor in the rise of vertical farms.

"More and more we find guests asking us 'How green is your hotel?' 'How safe is your food?' 'Where is your food coming from?'" says Toma. "Many hotels are moving towards local for various reasons, but this is the most local you can get. From picking a head of lettuce to plating it, it can be just a couple of hours or less, so this is the freshest, cleanest, and safest option you can have." 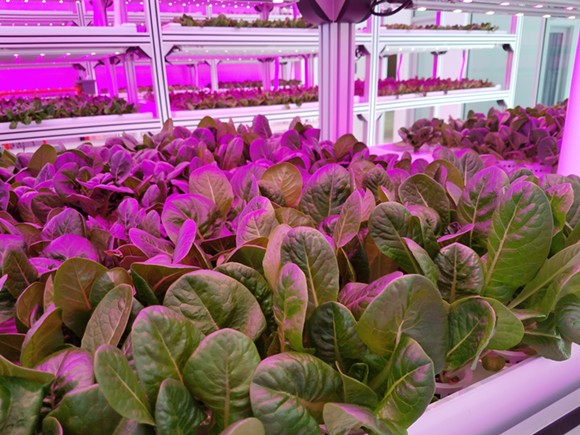 Faiyaz Kara
The time from pick to plate can be two hours or less.
The 2,000-square-foot Center-to-Table Gardens inside the Orange County Convention Center utilizes vertical farming with 81 towers resembling poles, each with 44 planting spots. The yield is more than 80,000 plants annually, which James Katurakes, executive chef of Centerplate, utilizes as part of the convention center's food program.

Epcot's Living With the Land attraction has been showcasing the benefits of hydroponics (of which vertical growing systems play a part) at its four greenhouses for more than a decade. The convergence of entertainment, technology, education, horticulture and gastronomy is intentional, as much of the produce grown in the pavilion winds up on the plates at the Garden Grill and Sunshine Seasons restaurants inside the park.

Of course, biowalls, vertical gardens, garden walls and herb walls have been fixtures at many higher-end restaurants (Prato and Boca employ them locally), but the HyCube's patent pending technology, architectural punch and visual signature sets it apart.
"The HyCube offers five to six times the plant production volume than the towers at the convention center in roughly the same square footage," Toma says. "It also provides a more equal ecosystem for the plants, each level receiving uniform light and nutrients which are constantly monitored. At the convention center, the plants at the bottom receive less light versus those at the top. Also, each of the 80 towers at the convention center must be constantly checked, which is very laborious. We offer more grow space with just one-tenth of the labor required to operate the system.

"Furthermore, the HyCube uses only a handful of pumps to irrigate all the plants, versus 80 pumps for the tower gardens at the convention center.

"Harvesting plants in the HyCube is much cleaner, as plant roots are immediately pulled out of the growing system upon harvesting with virtually no debris left behind. In the Tower Garden, root balls are left behind inside the system, leading to further cleaning down the line. This difference leads to a much cleaner system, and consequently a much cleaner product, with less chance for plant-borne disease."

In a highly competitive hotel market, HyCube, which came at a cost of well over $1 million, poses as a differentiator for Marriott. There's even a dining space built specifically for special chef's table-style dinners where hotel guests can enjoy the "garden" view. 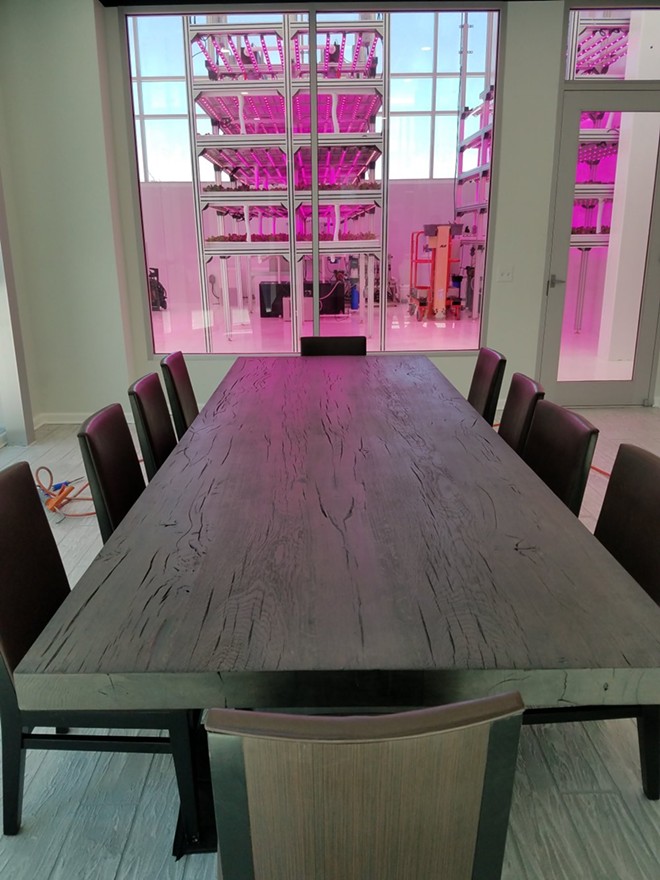 Faiyaz Kara
HyCube's™ dining event space
"We're on a very high-end property," says Toma, "and for hotels, [aesthetics] matter a lot. HyCube's architectural value and the statement it makes, especially with the lighting at night, underscores the effect it has on the hotel's guests."

Which means other high-end hotel properties will likely look at the benefits of vertical farming and follow suit.

"We have an aggressive rollout plan in the hospitality industry, and we're going to make some announcements very soon, " says Toma. "We have quite a few projects in the works, so the idea is definitely taking off."

No doubt. For HyCube, and urban farming in general, the future's certainly looking up.

Local restaurants interested in having HyCube's™ local hydroponic produce delivered to their doorstep can visit hytastechef.com.