For old-school shred-heads, the return of Vinnie Vincent at Spooky Empire is the best surprise of 2018

Ankh if you love a comeback 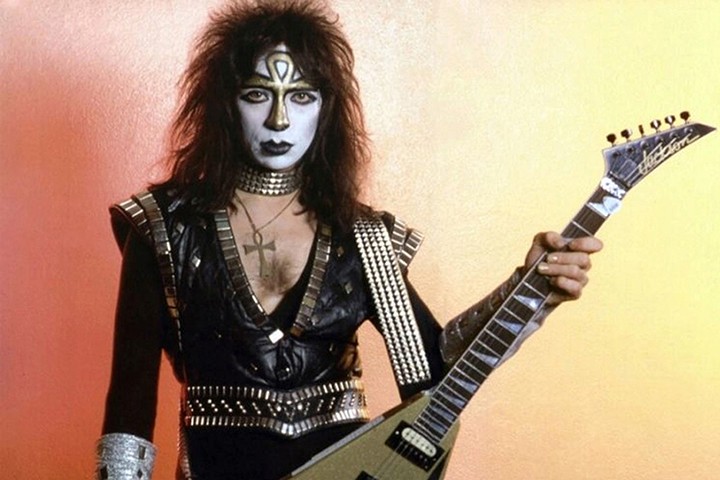 Until just a few weeks ago, Vinnie Vincent was the kind of guy you were likelier to get a phone call about than a phone call from. An outrageously talented guitarist and songwriter best known for his 1980s work with KISS and his own Vinnie Vincent Invasion, Vincent had spent the last two decades a virtual recluse, with only the occasional spate of bad publicity – including a 2011 domestic-assault charge -- to confirm that he was still among us.

So it’s both surreal and a profound relief to hear his voice on the other end of the line, sounding focused and enthusiastic as he prepares for an appearance at Spooky Empire (April 6-8 at Wyndham Orlando Resort; spookyempire.com). It’ll be only his second step in a surprise comeback that began with a well received, out-of-nowhere booking at the January 2018 Atlanta KISS Expo.

“I was moved. Because I didn’t think anyone would show up,” he laughs. “I said, ‘There might not be anybody there,’ you know. But I was moved, because I couldn’t believe how many people were there.”

As shown in clips that were posted almost immediately to YouTube, the hall was packed with fans whose ears had never quite stopped ringing from the gonzoid guitar acrobatics of “Boyz Are Gonna Rock” and “Twisted.” And it only came about, Vincent says, because of the dogged persistence of the show’s promoter.

“I mean, he spent seven months … just [a] constant barrage of emails that said ‘I want Vinnie for an expo.’ I said ‘No, no, I don't think I want to do this, because I don't think anyone is interested.’”

So if that answers the “why now?,” the logical next question is “Where have you been?” Vincent cites two main factors in his prolonged absence from the scene: a bad marriage and a never-ending lawsuit.

“Take a relationship that’s incompatible and inharmonious,” he illustrates, “and full of booze and medications.” (NOTE: He’s referring to the spouse, whom Rolling Stone has identified as Diane Cusano, and who died in 2014 from the effects of long-term alcohol abuse.) “And when you’re dealing with someone who’s in a relationship or marriage like this, and there’s a gun in that house that you don’t know where it is … you're living in some kind of surreal place that you don’t know what’s going to happen.”

What happened was that aforementioned charge of aggravated domestic assault, of which Vincent has continued to profess his innocence. (He reportedly agreed to anger management.) Meanwhile, he was fighting a costly and time-consuming legal battle against his former employers Gene Simmons and Paul Stanley for alleged unpaid royalties – a fight that went all the way to the Supreme Court.

“I said, ‘There’s a warrior in me, and I am not going away unless I know I did everything I possibly could to see that justice is done.’”

“When you have money, you are the winner in court. You win. It’s just that simple.”

Through it all, he says, “My guitar kept me alive. You know? Playing five, six, seven hours a day was what grounded me into keeping that person who I am solid.”

The upshot of Vincent’s lowered public profile was that others were free to create a narrative about him. And that narrative wasn’t always pretty. Simmons in particular claimed repeatedly that Vincent had turned away “the keys to the kingdom” by refusing to accept the terms of employment KISS had presented him with during Vincent's brief but creatively fertile 1982-1984 tenure with the group.

“I used to laugh – but it was a sad laugh – when I heard that,” Vincent says. “And I thought, ‘Well, the only keys I ever saw, they fit the car that was a beater. Or they fit a tenement building.’”

Yet when he speaks of Simmons and Stanley these days, his tone is surprisingly affectionate. He says he still considers them friends, and now understands what their “priorities” were at the time, even if those priorities differed from his. Above all else, he's grateful to them for giving him his shot.

“They gave me the chance of my life,” he states emphatically. “And I owe everything to them.” Plus, it was fun: “I had two years of laughter. We had a great time together.”

As for the music, “I found the band that I had been searching for, you know? We had something absolutely incredible, and I don’t think that ever goes away.” (Two of the numbers Vincent co-authored with the band, “I Love It Loud” and “Lick It Up,” remain staples of their presentation.)

Now, he promises, he’s back in spades. At Spooky, he’ll do a Q&A, sign autographs and pose for photos with fans – at one point even donning Freddy Krueger’s trademark hat and sweater. (Vincent’s Invasion recorded the song “Love Kills” for the A Nightmare on Elm Street 4: The Dream Master soundtrack.) A week later, he’ll appear with Simmons in Nashville to help the latter deliver another batch of his massive, pricey Gene Simmons Vault box sets. (Looks like that’s one hatchet we can indeed consider buried.)

Vincent also plans a tell-all book he hopes will be published in early 2019. And he’s clearly interested in making more music with Robert Fleischman, the singer on the first Vinnie Vincent Invasion album, who joined him for an impromptu and highly emotional acoustic performance at the Atlanta Expo.

But for the moment, it’s all about him and us: “I’m having more fun now interacting with the fans – who are becoming friends – than I ever had,” Vincent says. “It’s a good time. It’s a nice time to be alive.”