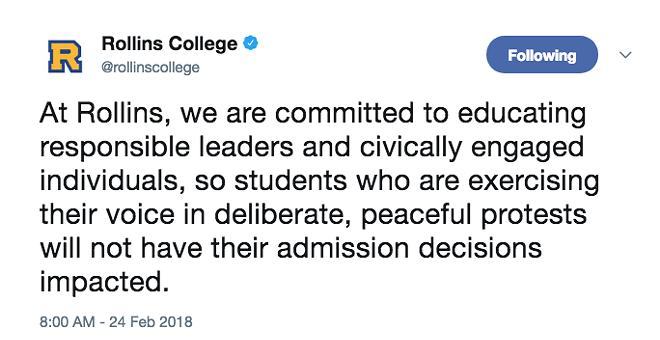 After the Parkland shootings and the remarkable rise of organized protest among Marjory Stoneman Douglas High School students, other students across the country announced walkouts and protests in support. Some high school administrations responded by playing the heavy, like this Texas school that threatened to suspend students who protested.

As Reuters, the Chronicle of Higher Education, Buzzfeed and several other outlets reported over the weekend, colleges and universities across the country have taken to social media to assure students their chance of admission will not be negatively affected by a suspension for a protest or walkout.

Starting Wednesday, after the wave of suspension threats was announced by various high schools, dozens of colleges and universities, from Ivy League to public state schools, have assured students that their applications for admission will not be affected by suspensions for protesting.

The colleges include Yale, Brown, MIT, UCLA, Tulane, University of Chicago, and dozens more. The National Association for College Admission Counseling is maintaining a growing list.


We will not penalize students for standing up for what they believe in or for making opinions known through... https://t.co/bG2qRB1Hiz

But what about Florida, site of the shootings and home of the spineless Legislature that looked the Parkland kids in the eyes and refused to even discuss regulating the sale and possession of semi-automatic rifles and extended magazines.

By Saturday, the University of Florida, New College, Nova Southeastern and Rollins College had all joined the pledge. From FSU and UCF, though, a deafening silence.

With Florida the scene of not just Parkland but also Pulse, and with the quivering jelly of NRA money that is our own Sen. Marco Rubio, it feels important for Florida schools to stand up. We reached out to FSU Admissions and have heard nothing yet.

We also reached out multiple times in the last couple of days to multiple UCF employees in the communications, media relations, admissions and social media departments and have received no comment. Really?

When other colleges are saying things like "Yale will NOT be rescinding anyone's admission decision for participating in peaceful walkouts for this or other causes, regardless of any high school's disciplinary policy" or "Applicants to Brown: Expect a socially conscious, intellectually independent campus where freedom of expression is fundamentally important" or "Speak your truth" (Dartmouth) or "We stand with you" (UCLA), it's extremely disappointing to see our hometown university waffling on making a simple statement of support.

UCF students lived through the Pulse shootings, and now Parkland. They deserve better from their administration, and this silence should and probably will discourage prospective students. Maybe it's a backdoor way to solve their size issue?

UPDATE: Twitter user @LouStoo directed our attention to the below post, which went up 25 minutes after we finally hit publish on this post, after waiting almost 48 hours for a reply from their communications professionals.