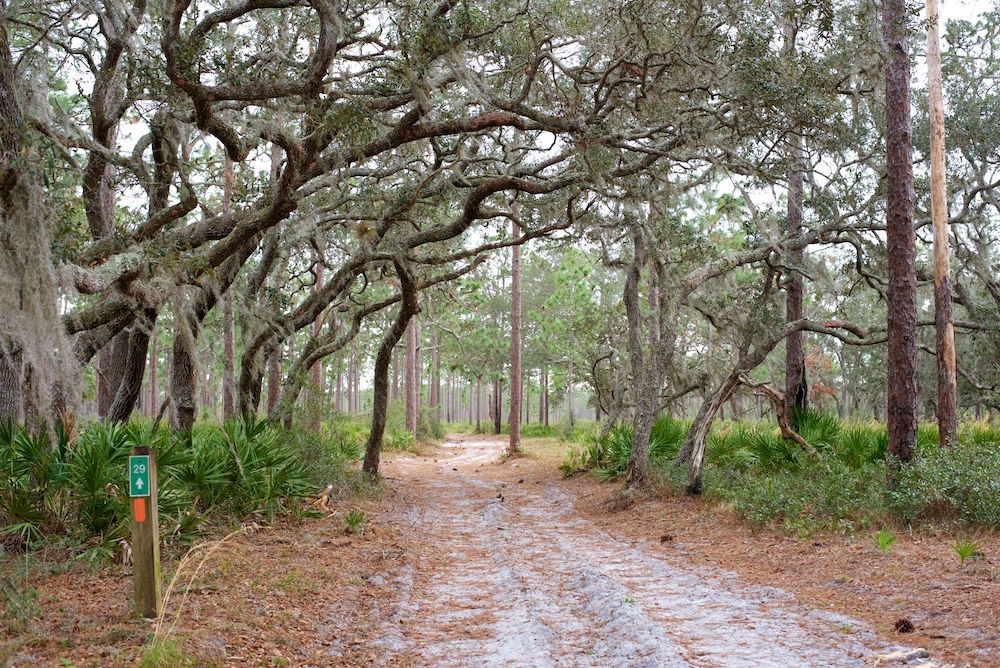 Off the sandy path, Dave Wegman squats near a small burrow hidden behind scrub.

"Careful," he warns, pointing to the white sand circling the half-moon hole like a skirt. "That's called the apron. Gopher tortoises will lay their eggs in the sand, so you have to be careful not to get too close and step on their nest."

He peers quickly into the dark hole.

"Looks like no one's home," he tells a group of hikers, continuing into the dense greenness of sawgrass, gnarled oak trees and longleaf pines. "Let's keep going."

For several months, Wegman has led treks through the Split Oak Forest Wildlife and Environmental Area, a nearly 1,700-acre preserve on the outskirts of Orlando's Lake Nona community that sprawls into St. Cloud and Osceola County. The forest is named after a 200-year-old tree on the property that survived being split down the middle. Aside from harboring the threatened gopher tortoise species, Split Oak is home to Florida scrub jays, sandhill cranes, Sherman's fox squirrels, gopher frogs, white-tailed deer, wild turkeys, indigo snakes and bald eagles.

Orange and Osceola Counties purchased Split Oak more than 20 years ago as a mitigation bank to offset wetland impacts. Since then, the Florida Fish and Wildlife Conservation Commission has managed the area by conducting prescribed burns, chemically removing invasive species and bringing in dozens of relocated gopher tortoises. No hunting, camping or biking is allowed in Split Oak – only hiking and permitted horse riding. Visitors say the pristine jewel reminds them of what Old Florida must have looked like before development ran rampant through the state – there's little signage throughout the park, no bathrooms, no trashcans and only one known picnic table.

Since 1997, Wegman says, he's used Split Oak as a beautiful respite from the outside world – which is why he was shocked to learn local transportation officials planned to cut right through the middle of Split Oak to expand a toll road.

Last year, the Osceola County Expressway Authority planned to expand the Osceola Parkway east almost 10 miles with routes that would bisect Split Oak, including one route that cut through Orange County's part of the forest. The Orlando Sentinel reported last March that OCX chairman Atlee Mercer said the extension was "a road that's got to be built," and insisted the damage to Split Oak would be lessened by elevating the road across sensitive environments. An alternative proposed route cut through further south and bypassed the forest.

Valerie Anderson, a land-use analyst who based her master's thesis on the forest's history and ecology, has been hiking and getting lost in Split Oak since she was in college. When she heard of the plan to bulldoze through the preserve, she organized a Facebook group to protest the move and started a petition.

"I couldn't believe that this was happening and nobody knew about it," she says. "The public notification was terrible. So from there, we just started organizing hikes, like two a month, and they just really started to ramp up."

As OCX was absorbed by the Central Florida Expressway Authority (CFX), regional transportation officials have decided to take another look at the proposed routes. Anderson says the extension is heavily backed by Tavistock Development Co., the developer of Lake Nona, and Deseret Ranches, a 290,000-acre parcel owned by the Church of Jesus Christ of Latter-day Saints that's proposed to house a half-million people. Anderson says extending the parkway would help Tavistock's proposed 24,000-acre Sunbridge community, where construction is anticipated this year. Orlando Weekly reached out to Tavistock for a comment but did not receive a response by press time. A spokesperson for Deseret Ranches refused to comment on the project and referred OW to Tavistock. Both entities have been trying to persuade the CFX to build the Osceola Parkway extension through Split Oak by offering almost 1,400 acres around Split Oak as conservation. Developers have argued that avoiding Split Oak entirely would push the road into future subdivisions.

Brian Hutchings, a spokesperson for CFX, says the agency has set up several meetings with environmental and financial stakeholders to study the extension. After a series of public meetings this month, CFX's governing board, currently headed by Osceola County Commissioner Fred Hawkins Jr., will likely make a decision on the feasibility of the project in March.

"In the meetings we've held, the majority of the Split Oak folks don't want Split Oak to be hit at all," Hutchings says. "Not hitting Split Oak will not be without consequence – you move in and hit subdivisions and now you start talking about taking people's home. Those ramifications are neither good nor bad, they're just a matter of fact. If it's going anywhere, it's got to have land and either have some impacts here or there – which is why we go through this process to find the most suitable route with the least amount of impact to both the environment and people that work in those areas."

Anderson says people have accused her of being against progress, but she argues putting a road through Split Oak would fundamentally change the nature of the preserve – the prescribed burns which have helped the forest flourish would definitely end if nearby cars and trucks had to be considered.

"Split Oak is protected way more than other areas, and this is still happening," she says. "If we let the road go through here, and we keep letting people extinguish easements, the next place could be a place you care about. These are the only protections we have, and we should fight for them."

There will be three meetings this month organized by the Central Florida Expressway Authority to allow public input on the Osceola Parkway extension that will affect Split Oak Forest. The board will likely make a decision on the matter in March, says Brian Hutchings, a representative of CFX. The same information will be presented at all three meetings.

- Wednesday, Feb. 21, at the Association of Poinciana Villages. The meeting will be in the Poinciana Community Center, 445 Marigold Ave., Poinciana, from 5:30 p.m. to 7:30 p.m. You can also send your thought