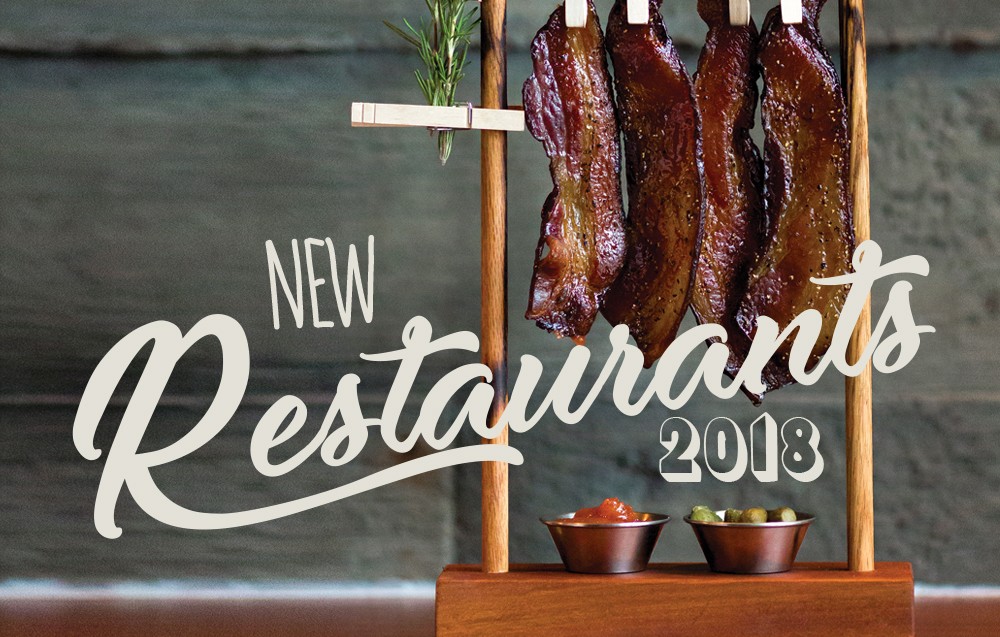 Photo by Rob Bartlett
Clothesline candied bacon from The Edison

Judging from the spate of new restaurants that have opened, or are set to open, in 2018, we’re about to be fed a healthy dose of tacos, coffee, doughnuts and vegan fare. Unlike 2017, we’ll also see the return of the celebrity chef, with culinary A-listers including Jose Andres, Wolfgang Puck and Tony Mantuano poised to settle into gastronomy’s Olympic Village (aka Disney Springs). Fast-casual restaurants may not be going anywhere, but the rise of the fast-fine eatery is rapidly altering our restaurant landscape.

And if last year was any indication, some of the restaurants listed below may not open at all (Circo recently got the square) and many will experience postponements courtesy of permitting wrangles, construction delays, money shortages and/or the ever-present unforeseen circumstance. Though, for the sake of our collective stomachs, I really hope not.

The azure-hued taqueria has been somewhat of a favorite in Metrowest, but how will the Winter Park set take to it? Likely pretty well (this is accessible Mexican fare, after all) but, then again, burgers are accessible too and that didn't help the space's predecessor – Square 1 Burgers – all too much.

OK, they were supposed to open in February ... of 2017, but we're pretty sure it'll be worth the wait to gorge on chef Francisco "Chico" Mendonça's creations now that he has a full kitchen in which to work. Portuguese fare, with French and Mexican influences, is his specialty and it's what made the Bem Bom food truck a popular draw. The gut-rehab of the old BB&T Bank building on Corrine Drive has taken much longer than expected, but we're almost there, folks.

A café with European flair and fresh-made pastries in College Park. Sound familiar? Well, Tartine Café & Eatery will have some competition when Johnson & Wales grads Michael Brito and Christina Gribkowsky open their Café Linger in the old NYPD Pizza space this spring. The pair plan on serving weekend brunch, and vegan options won't be mere afterthoughts either. Linger we will.

Never mind the annoying number jumble in the name. What chef-owner Leo Santos and his wife, Shirley, bring to the streets of Apopka is a true taste of the calles of Ciudad de México: elotes and papas fritas; slow-cooked carnitas served with pickled onions on homemade corn tortillas; flautas with potato and chorizo; homemade Mexican flan. Say it with me: road trip!

Yet another in the line of food trucks going brick-and-mortar, Caro-Bama BBQ by husband-and-wife tandem Lora and Brandon Gantt will feature a hot sandwich bar inside the North Quarter Market, filling the void left by Farmacy. As the name suggests, their offerings fuse the smoking traditions of the Carolinas and Alabama. Yee-haw.

So the Bento Group (who run Bento Asian Kitchen, Avenue Gastrobar and Sticky Rice) decided their other concept – Kasa – needed a rebrand, and so Chela Tequila & Tacos was born. Chela's Mexican fare is a whole lot less highbrow than the globally inspired small plates coming out of Kasa's kitchen but, hey, who doesn't love a good taco? Knowing the Bento guys, they'll do 'em right.