5 specialty cocktails you should be drinking in Orlando this fall

Sugar and spice and everything nice (but no pumpkin, we promise) 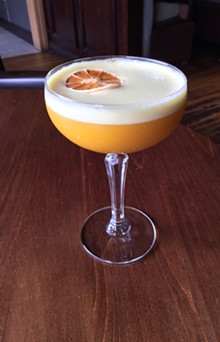 Orlando's bartenders and mixologists swelter all summer in anticipation of cooler weather, which gives them the excuse to shake and stir heartier libations. Here are five fall cocktails we just can't wait to try.

Served in a rocks glass, this ginger-forward drink gets its bite from Flor de Cana rum, Courvoisier VSOP and Punt e Mes, garnished with lemon and mint. Beverage manager Eric Bandauski says the drink was born out of a brainstorming session. "It has a lot going on, but it starts with a short sweet note, then pretty quickly a rounded bitterness comes in that has hints of grapes, aged rum and ginger spice."

Last year's popular Cider & Bourbon toddy will make its appearance later in the season and will remain on the menu through New Year's, but the Cannes Artist features fall flavors to enjoy right this hot minute. Buffalo Trace bourbon is mixed with allspice dram, spiced mango, lime and pineapple. "The cocktail is a warming drink with fall flavors and a hint of tiki and Mediterranean nuance," says bar manager Josh Hiller.

Between the Hudson Maple Cask rye, Osborne Pedro Ximenez sherry and whiskey-barrel bitters, we're ready to button up our flannel and hop on. Chelsea Harkness, bar manager at 1921, says, "The woodsy potency of the rye is soothed by the deep, sweet, raisin-like sherry, while barrel-aged bitters teem with fall spice."

Apple Sauce: The Lounge at Urbain 40

Sweet, tart, smooth and totally evocative of the sounds you'll hear coming from the jazz trio on stage. The drink mixes Fireball, Apple Pucker and pineapple juice, and for a little extra seasonality – a cinnamon-sugar rim.

Bar manager Kristian Siriani wanted to create a frothy, spicy apple-brandy sour. "This cocktail is a balance of heat and fall spices," he says. The drink gets its golden color from turmeric; other ingredients include aquavit, ginger-honey syrup, lemon, egg white, Pedro Ximenez sherry and Calvados.