16 new Orlando restaurants you need to try in 2016

State of the plate

Last month we named our Top Tables of 2015; now it's time to look forward. There's a buzzy new crop of restaurants flourishing in Orlando, and we are, well, looking forward to seeing how they fare in 2016 – many seem poised to become established players on the dining scene. We picked just 16 here, but you can be certain we'll review many more than that in the months to come.

(A note about our reviews: We usually don't review restaurants until they've been open for at least three months. If you've ever visited a restaurant in their first days, you probably know why. Often, the kitchen and the front-of-house staff are still working through new ideas and new processes, which can lead to service miscues, slow plates and a generally uneven experience. We don't see any reason to set those early mishaps in stone, so to speak, by publishing a definitive review before a young restaurant is ready to shine.)

That said, we are beyond excited by the class of 2016, and we've selected 16 promising new arrivals – a mix of cuisines, price points and neighborhoods – for you to try right now. One's been open almost six months; one just opened two days ago, but all are pleasing harbingers of the year to come. 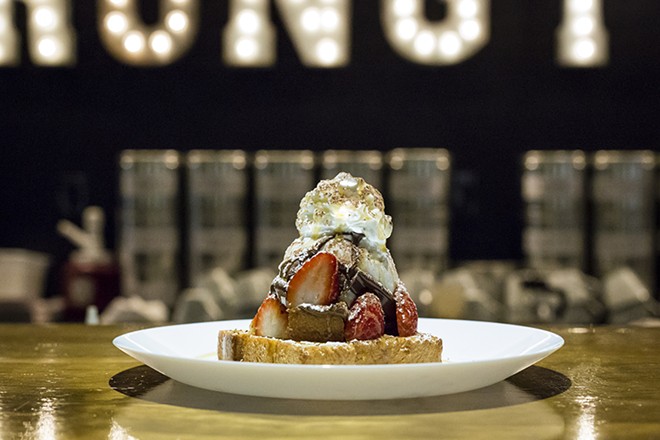 There's nothing newfangled about Thai food, or tea and toast, or grilled cheese, yet KrungThep (the Thai name for Bangkok) manages to make it all fresh. The whimsical, inventive menu twists familiar Thai favorites into delightful funhouse versions of themselves: tom yum goong soup becomes a snappy shrimp salad; gra-prow chicken finds itself in a grilled cheese sandwich with mozzarella and basil mayo. Dozens of teas and iced drinks round out a menu punctuated by "brick toast," KrungThep's over-the-top take on dessert, which consists of piles of honey-drenched toast "bricks" crowned with various combinations of ice cream, fruit, chocolate syrup, Nutella and/or whipped cream.

After a lengthy permitting process, Market on South finally opened its doors late last fall. For fans of Valhalla Bakery's vegan pastries and the Dixie Dharma food truck, the protracted wait was almost as painful for us as it was for the chef-owners (we said almost). But all's well that ends well. Anyone who enjoys plant-based cuisine now has easy access to Celine Duvoisin's inspired doughnuts, cinnamon rolls, butter tarts and Nanaimo bars, as well as Shaun Noonan's gourmet vegan riffs on Southern fare: fried green tomatoes with chowchow and eggplant remoulade; creamed Zellwood corn with charred pearl onions and chervil; Carolina barbecue jackfruit in Coca-Cola reduction. (Cruelty-free doesn't mean calorie-free – make no mistake, this is treat-yo'self dining.)

Orlandoans have followed genial Italian chef Stefano LaCommare from spot to spot (Il Pescatore, Stefano's Trattoria), but now the next generation is stepping in. Roughly six weeks ago, LaCommare's son Leonardo, daughter Antoniella and son-in-law Francesco opened a 10-seat pizzeria in Winter Park. Given that all three were involved at family-fave Il Pescatore (with Francesco manning the pizza oven), expectations are high – and likely to be fulfilled.

International Drive has recently seen a dip in the kind of splashy, upscale "dining experiences" that used to litter the strip. But with last year's return to Orlando of the Del Frisco brand, tourists and locals alike can relax into the luxury of a true high-end steak house. Along with top-quality meat and classic sides like shrimp remoulade and creamed spinach, rising young sommelier Jill Davis will assist you in selecting just the right juice from Del Frisco's 1,200-bottle wine cellar.

Urbain 40 made it into our Top Tables of 2015, despite the fact that we haven't yet officially reviewed it – we noted that the French brasserie with a swing-era vibe is "arguably the most beautiful restaurant space in the city." Owner Jaafar Choufani and his father, noted restaurateur Rashid Choufani, spared no expense in decking out the restaurant – now they just need to lock down the menu and get the front-of-house staff solidly on track. As we said in December, Urbain 40 is just too damned gorgeous to fail.

Hanson's Shoe Repair kicked off the speakeasy trend in Orlando, and while the appeal of the cloak-and-dagger password stuff wore off eventually, the skilled hospitality offered by head bartender Rene Nguyen and his crew stayed ever-appealing. So we were pretty thrilled when they opened another cocktail lounge last week in association with the V Group. It's too early to say for sure, but it's a fair bet that Herman's will be just as successful as Hanson's.

When Metro Diner opened its ninth Florida location – and its first in Central Florida – in Altamonte Springs, some may have overlooked it as just another chain breakfast joint. That would be a mistake. The restaurant that found fame on Food Network's Diners, Drive-Ins and Dives is all about pleasing the people, with extravagant riffs on blue-plate classics like chicken & waffles (theirs comes with half a fried chicken and a hockey puck of strawberry butter), French toast (concocted with pound cake instead of bread), and the Pittsburgh sandwich (a conglomeration of thick-sliced bread and smoked pastrami topped with melted cheese, a fried egg, french fries and cole slaw). We wonder if Guy Fieri will stop by for a meatloaf platter when he's in town next month?

More of a rebranding than a whole new restaurant, nevertheless this bee-centric rethinking of Baldwin Park mainstay Jack's Steakhouse is intriguing. Seito Sushi and Osprey Tavern (another one of our Top Tables of 2015), both also on New Broad Street, serve the locals' luxe dining desires; Provisions & Buzz, on the other hand, is more of a comfortable hangout, offering Sunday brunch, Taco Tuesdays, a generally playful vibe and a hopping bar area home to happy-hour specials. Menus, though heavy on comfort-food favorites, are ambitious, with plates like burrata and beet salad, miso-marinated black grouper, and bourbon-spiked pineapple upside-down cake.

Smith & Adams sounds almost like a law firm, doesn't it? Oddly enough, this home-grown sweetshop is the result of a partnership between an experienced patissière and, yes, an ex-attorney, and they're making sweet music in a Colonial Plaza storefront next to Gigi's Cupcakes. After a long run-up to readiness, doors opened in December, and Smith & Adams' polished, clean-edged caramels, cordials, truffles and ganache already have a devoted following. (If they have it when you visit, don't pass up the matcha-lemongrass bonbon – it looks like a Martian Ring-Pop but tastes like heaven.) Would it be gilding the lily to point out that Valentine's Day is fast approaching?

It almost wouldn't matter what they served here – the design of the place, from the 36-foot-tall ceiling with rainshower-crystal chandeliers to the grand staircase and tucked-away jewel box of a bar, is jaw-dropping. But Iron Chef Masaharu Morimoto doesn't disappoint, either, offering a menu of exquisitely executed pan-Asian creations like duck ramen, sweet-and-sour crispy branzino, sticky-sweet spareribs and rock shrimp with spicy gochujang aioli.

When chef-restaurateur Greg Richie shuttered Cityfish just a year after re-concepting it, we wondered what was up. When he opened Baoery in that space – no offense to Cityfish – we were too busy stuffing our faces with delicious fried-chicken bao and pork-belly ramen to care. Bao, those miniature steamed-bun sandwiches, are the backbone of the menu, but we're partial to the Asian gastropub twists like "kim-cheese" (kimchi-laced mac & cheese) and hoisin duck tacos.

Tabla teetered on the edge for a few years, though it never quite closed; you could say it's not a new restaurant if it's in the same space and bears the same name, but a new menu, new chef and new decor equals a fresh start in our book. Chef Ian Piamonte's addition of Thai, Chinese and Mongolian flavors to Tabla's Indian repertoire has revitalized the room just as much as the remodel unveiled in October: Manchurian cauliflower and Thai green curry mingle with naan, tikka and tandoor specialties in a surprisingly just-right way.

We really wanted to like Bistro Cloclo, but it was just a bit off; service and menu missteps dimmed the appeal of the pretty Parisian room on Restaurant Row. So when we heard chef Reimund Pitz of Orlando mainstay Le Coq au Vin was taking over the space, enfin, our hearts lifted. He and his wife, Sandy, have been dishing up bistro plats du jour — more casual and at a lower price point than Le Coq au Vin's classical cuisine — with Gallic flair for just a few months, but we feel sure they've settled in for a long run.

The newest entry on our list has been open for just a couple of days – their official soft open date was Monday, Jan. 18. It's early days, obviously, but the (mostly) vegan menu encapsulates exactly what we want to eat now: greens-and-grains bowls teeming with fresh veg, leafy herbs, creamy legumes, roasted crucifers and lush sauces. Although it's, say, 98 percent plant-based, we applaud the decision to offer organic milk and farm-fresh eggs to those of us for whom "put a egg on it" is not just a saying, but a way of life. The well-seasoned avocado toast and almond-milk mocha (with cinnamon and salt!) we sampled were spot-on.

It remains to be seen whether Orlando inhibitions are likely to be shed as easily as they are in Key West, but this red-velvet boudoir of confectionery and strong drink is here to encourage naughty behavior, of the highly calorific and ostensibly calorie-burning types. With its none-too-subtle name, high-walled booths and no-children policy, even if all you want is a sugar buzz off dishes like the Money Shot, Jungle Fever or Missionary Crisp, the heavy innuendo may put you in the mood for more. Or not.

Let's get it out of the way: Yes, TR Fire Grill is a concept from Romacorp., parent company of the Tony Roma's rib empire, and yes, it's ripe to be rolled out nationwide. But it's good to remember sometimes that chains aren't inherently evil (depending on your stance on labor relations and supply-chain politics). TR Fire Grill has found itself a strong fan base in its new Winter Park home, occupying 5,600 square feet in the Ravaudage complex after a lengthy "dry run" down by the airport. Kinks seem to have been worked out satisfactorily since its November bow, if the customer raves for its bumped-up, locally-sourced-when-possible pub fare are anything to go by. We're intrigued by an appetizer of thick-sliced bacon and jalapeño deviled eggs topped with pickled red onion and barbecue potato-chip dust; those less hedonistic can take advantage of a diety dish of salmon over spiralized zucchini.

« Why the demise of all 16 Le Cordon Bleu culinary schools may not be such a loss after all   |   A tasty lunch shouldn’t cost more than $10, so here’s our latest roundup of local cheap eats »