Where to hear live music, kick it with friends, drink and dance in Orlando 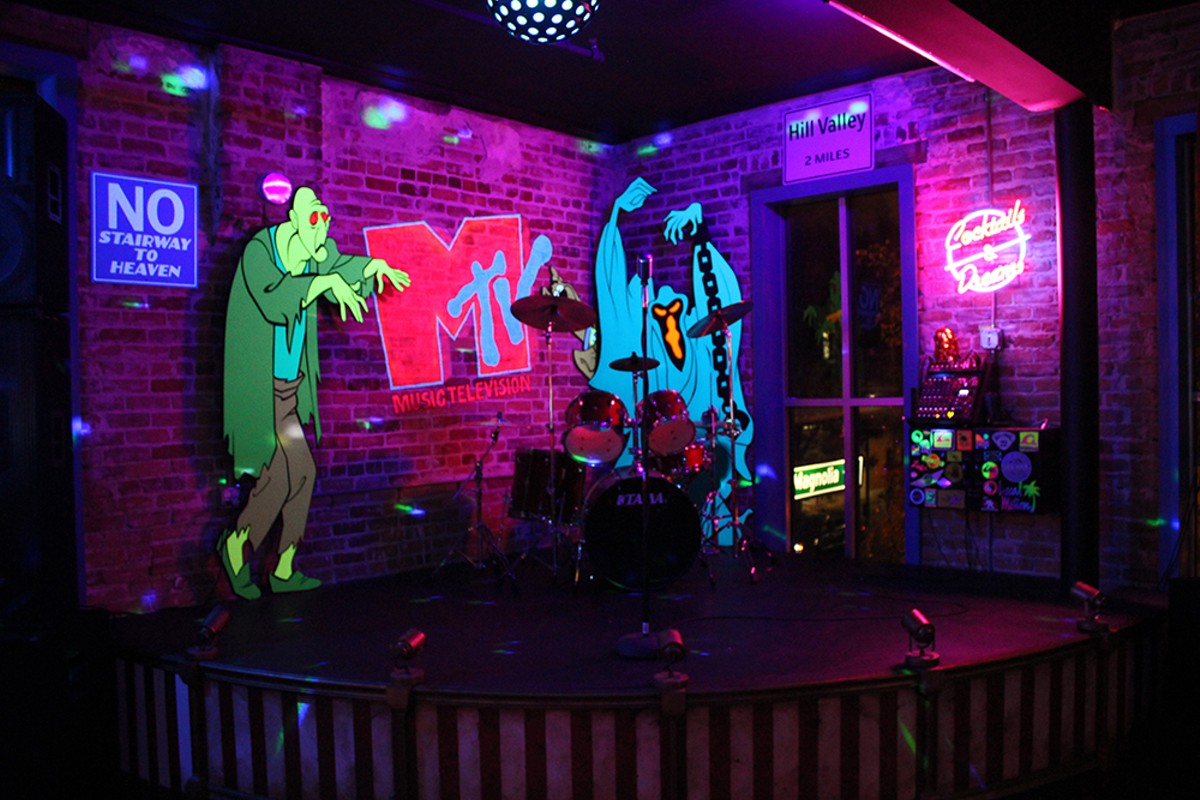 Justin Bieber, Selena Gomez and Stevie Nicks have all made the Amway a tour stop – this big league arena also is home to the Magic and the Solar Bears, only a few steps from downtown.

Backbooth pulls off the deft balancing act of hosting late-night dance affairs like Floorplay and Midnight Mass alongside earlier, all-ages-friendly shows with everyone from Mitski to straight-edge pioneers Judge. Check out Shake & Bass Sunday for a night dedicated to the bump and grind.

The downtown concert venue provides a much-needed home for larger-scale shows in the center of the city – think Sleep, Run the Jewels or Dinosaur Jr. The open floor provides multiple pathways to edge your way up to the front, though good luck navigating tightly packed crowds.

Venture deep into the heart of Universal's CityWalk entertainment complex for entertainment that straddles mainstream (the 1975), nostalgic (Bryan Ferry) and outside-the-lines (Slayer) all at once.

The musical menu on offer at this roomy Winter Park club is loud, heavy, metal and that's pretty much it. A perfect landing spot for distortion that's a little too big for the likes of Uncle Lou's. Top-shelf sound and lights, too.

Shows may start on the early side, but that's really the only overt sign that this concert venue is nestled in the Disney Springs adult playground. Expect to see anything from the Roots to the Flaming Lips. The sightlines and sound system are recommended.

Usually known for more DJ-oriented dance nights – house legends and upstarts have held court, along with vaporwave and other outsider sounds – this Milk District venue provides a home for the more adventurous and underground end of the local music spectrum.

A chill, intimate downtown space often packed to the gills with the devoted, straining to get as close as possible to their favorite touring artist. Artists such as Point Point, Said the Sky, and Big Wild have made appearances here. The stage is so close to the pit that you can practically reach out and touch the band.

A truly unique live music experience. Tucked away in an unassuming South Orlando neighborhood, the White House (for it is indeed a house) offers incredible natural acoustics, a near cathedral-like setting and an adventurous event slate.

What Uncle Lou's lacks in space, it doesn't lack in grit. Local and national acts – particularly experimental, punk and noise artists – roll through this dim club reminiscent of a house show.

The indie music scene flourishes here, with tons of performances every week from Orlando bands and mid-level out-of-towners. The venue is also connected to Lil Indies, a tiny bar with a stellar seasonal cocktail menu.

Rooftop lounge with multiple bars, covered seating, and a spacious area for dancing under the night sky. No cover.

The lushly renovated, 10-bar, dual-dancefloor nightclub Gilt is a significant upgrade from a previous incarnation as the Roxy, so put on your essential attire and dance the night away to the tunes of some of the dirtiest EDM producers. HTG Events hosts "Encore Saturdays," where they've booked top acts such as Adventure Club and Zeds Dead.

Downtown multi-room nightclub with three bars and cheap drink specials. Wednesdays are reserved for throwback Mac and Cheese Nights, which, while they're as cheesy as you'd expect, make for a fun night out.

This two-level downtown superclub knows the devil is in the details, boasting three bars and seven private cabanas, but the focus is on a dance floor soundtracked by a rotating cast of local and touring DJs.

Resort by day, bumping club by night. Some of the most locally (and nationally) popular drag queens perform in the Footlight Theatre and the main room, while various bars and plenty of room to dance can be found elsewhere.

Peek has a simple layout and a lack of glitz, but the electronic music dropped by the DJs is enough to promote a groovy environment where dancing shoes are a must.

Themed parties like Christmas in July and Power Rangers aren't all the sprawling nightclub has to offer. Drag queens and burlesque troupes often rule the night, along with drink specials, house music, and clubgoers getting into the groove.

Large-ish nightclub with luxurious areas for VIP bottle service. Not much elbow room on the dance floor, but elbowing your way to a slice and some bubbly on Pizza & Champagne nights seems worth it.

Vain operates under the maxim that bigger is indeed better, sprawling out over a massive three levels, with a packed calendar of dance events and celebrity guest dates including, recently, Waka Flocka Flame.

Two-floor club with three indoor stages, bumping sound systems, and killer lighting. Check out some of the heaviest bass and house acts, like Datsik and Shiba San, in a setting that's more intimate than a stadium show. "Create," the newest Thursday-night concert series by Alliance Nightlife, promotes some of the newer popular (and local) artists. Some shows offer free entry before 11 p.m. or tickets as cheap as $10.

This newish beer and wine spot in the North Quarter brings classy decor and an all-vinyl DJ regimen to the neighborhood; event bookings have expanded to include literary readings and art events beside the requisite DJ nights and guest appearances.

Steps away from campus, Bar Louie is a great place to chug down some cold ones and eat a filling meal. You don't have to break your college budget to have fun, either ­– burgers with tots or fries are only $5 on Tuesday from 5 p.m. to closing.

Karaoke is no joke at Big Daddy's; these people take their fun very, very seriously. You can be off-tune and breathy, but as long as you're committed, you'll get some applause at this singing shack.

Three-story club megaplex with cheap drink specials. Grab a frozen daiquiri from Chillers on the first floor, play arcade games at Cahoots, and party it up all the way to Latitudes on the rooftop.

If you're more about the finer sips in life, visit the Courtesy Bar for artful, handcrafted cocktails in a refined setting. Let these mixologists cater to you.

Winter Park-area Irish pub close to Rollins College offers up authentic grub and a variety of draft ales, lagers and stouts in a cozy environment.

'Tis the season eternally at this holiday-themed spot downtown, serving up liquor, beer and a custom menu of "fortified" snowball drinks.

For a solid happy hour and refreshing ambience, do your drinking at the Guesthouse. They make a mean Moscow mule.

This 75-year-old location of a pawnshop and loan shark office is now a cozy, yet sophisticated craft cocktail spot for downtown Orlando. Refine your liquor palate with these expert mixologists.

The Hideaway on Virginia Drive is the quintessential casual sports bar – it's not Miller's Ale House-intense, but there is a rabid Miami Dolphins allegiance that you won't miss. The Hideaway is also that rare sports bar where artists, hairdressers and theater folk feel right at home.

Nestled among Washburn Imports' stately tables and armoires, the Imperial reigns as one of Orlando's truly singular watering holes. The bar offers a no-nonsense craft bottle and draft list, coupled with a stout card of white and red wines, and is one of the only spots to check out live music in Ivanhoe Village.

Get away from the screaming children at Disney Springs by dipping into this dive bar fashioned from a 1940s airplane hangar. Quote the best lines from Indiana Jones while you slurp down a Cool-headed Monkey mixed drink.

This gamer haven in the heart of downtown goes all-in on the '80s arcade nostalgia trip – heavy on the neon and day-glo. Come for the vintage arcade games, stay for the cocktails and craft beers.

Owned by UCF alumni, Knight's Pub is the kind of traditional college bar where you know you'll have a good time on game days.

Hanging out at the Lucky Lure on a sunny afternoon is so much like being at the beach that it's a surprise to find the scuffed-up concrete floor doesn't have sand on it. The huge selection of great beer (cans only; they'll give you a coozie if you ask) is complemented by strong cocktails and your favorite beachy staple: the frozen drink.

Mathers is decked out in early 20th-century opulence, from comfortable leather armchairs to polished wooden bookcases. Just know that you're going to have to pay a steep price for the privilege of drinking anything here. There's also a dress code, so no shorts, guys.

Olde 64 is, thankfully, not a fancy bar – the owners embrace the no-frills divey ethos that makes a good watering hole a classic and offer drink specials that'll get you in the door, and a nonpretentious atmo that'll make you stick around.

Less college seniors, more graduate students, the Public House is more of a chillaxing spot than a full-on party bar. Pick your drink from a selection of 24 draughts and a full liquor bar.

With cocktails as low as $2, this Ivanhoe Village gay bar tends to be an everyone bar, especially earlier in the evening, and at those prices, it can be hard to tell when the drink specials end and the night returns to status quo.

Walk straight past the packs of families waiting to eat next to a dinosaur and sit underneath the tentacles of a giant octopus above the bar. Get a Raptor Rita mix and lose yourself in the colorful swarm of jellyfish above your head.

A dive-ish bar run by some of the folks behind the old Bar-BQ-Bar, Sly Fox offers cheap drinks, a chill atmosphere and a cool photobooth to document your drunken escapades.

Stagger Inn does not play. UCF's only country bar is always up for a good time, with or without wide-brimmed hats.

If you have no problem stumbling around with hundreds of other drunken people, block parties at Wall Street Plaza are the place you need to be: Weekends are madness. You can do a whole lot of drinking at eight different venues, but each has its own vibe. You'll probably need to try them all.

Orlando's premiere dive bar has strong booze and naked-lady wallpaper, which is all you really need to know. Come here often enough and you might spot local attorney John Morgan buying a round for everyone.

A true Orlando classic and one of the city's best-known dive bars; the Milk District's answer to Mills 50's Wally's keeps the super-strong drinks flowing fast and furious. Taking a selfie with the statues of Elvis Presley and the Blues Brothers that permanently adorn the stage is mandatory at some point in your Orlando career. Warning: cash-only.