Forever Naan's charming 20-something proprietors, Pooja Patel (pictured above) and Jasmeet Kaur (quoted below), could've been operating a gas station had kismet not intervened and presented them with the vacant space on Curry Ford Road in which they opened Forever Naan. The small curry shop is very much like the ones they often visited while living in San Francisco.

You don't often see women-run Indian restaurants. How have you been accepted in the community of Indian-Americans?

We have received a lot of appreciation from non-Indian customers and while Indian customers enjoy our food, we often find that our Indian community is not familiar with our casual concept, nor are they as easily accepting of what we're doing here as we're not conforming to cultural standards. We're often asked questions about why we are in a "service" profession rather than something like nursing or law. We've even faced questions from our own families as to why we want to cook rather than sit at a desk. It's almost as if what we're doing is inferior to the professions we are expected to be in as Indian women, but I also think it has to do more with different cultural views.

As well as handling questions of identity within your Indian community, do you ever feel the need to compromise authenticity in order to satisfy a non-Indian palate?

We do get people that request certain types of changes to the recipe and, while we are happy to make those changes for the individual, we don't often adjust the overall taste of our dishes. We like to keep them as true to our original recipes as we can – that is, bold, spicy and authentic.

How are you reducing food waste?

We only buy what we need. It's that's simple. We cook everything fresh, so we go and buy what we need as if we're cooking for our own home. And when we run out of food, we run out. We like this approach particularly because we create minimal waste. After five months in business, we are still adapting to trends and trying to figure out when the restaurant is busiest. For now, it's working and it's safe to say we rarely have to throw anything out. 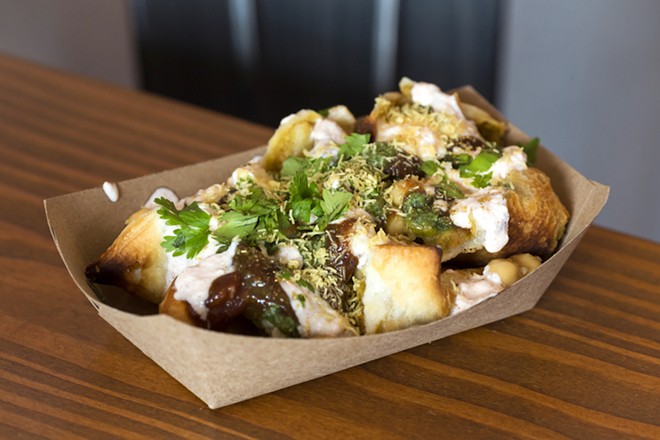 What was your first food addiction?

We both love Indian street food. I would have to say mine is chole kulcha and Pooja's would be samosa chaat. Everything just tastes better in street food format! (forevernaan.com) ▲