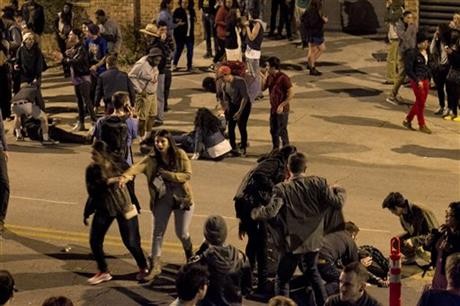 THAT THING WHERE ELIZABETH WARREN MAKES CONSERVATIVES CRAZY BY TALKING SENSE AGAIN: “Senator Elizabeth Warren laid out a new plan last week that would tax millionaires and use that money to help debt-saddled students refinance their loans. ‘Do we invest in students or millionaires?’ she asked at the Center for American Progress, saying she plans to introduce a bill that would revise the tax code to enact the Buffet rule. The Buffet rule, named after billionaire Warren Buffet, would tax individuals and businesses that make more than $1 million. The measure, which stalled in Congress, would raise $50 billion in revenue and ensures that millionaires don't pay lower taxes than the middle-class. Meanwhile, student-loan debt has soared to $1.2 trillion and growing. Warren's plan would allow students to refinance at lower rates, and the cost would be covered ‘dollar for dollar’ by the Buffet rule. She estimates that new grads who borrowed the maximum in undergraduate loans would have their payments drop by $1,000 a year, and interest over the life of the loan would be almost cut in half. Those with graduate loans and private loans would save even more. ‘We take in billions of dollars of profits for student loans, but permit billionaires to have enough loopholes that they pay at tax rates that can be lower than those of their secretaries,’ said Warren. ‘This is a straightforward choice: We can take $75 billion and either way we’ll use it to protect tax loopholes for billionaires or $75 billion can be used to help students to refinance their outstanding student loan debt. It’s billionaires or students.’” (via Deseret News)

WHO WANTS TO BE A MILLIONAIRE?:

FAREWELL TO A PIONEER. THOUGH LET’S NOT GET TOO LOOSE WITH THE TERM “PROGRESSIVE.” ASKEW WASN’T SO BIG ON GAYS OR WOMEN: “Reubin Askew, a progressive ‘New South’ Democrat who promoted racial equality and ethics reforms as a two-term governor of Florida in the 1970s and campaigned briefly for the presidency in 1984 and for the Senate in 1988, died early on Thursday in Tallahassee. He was 85. Ron Sachs, a spokesman for Mr. Askew, said that he had been hospitalized on Saturday with pneumonia and that his condition had worsened after suffering a stroke. Along with former Presidents Jimmy Carter of Georgia and Bill Clinton of Arkansas, Mr. Askew was part of a new wave of moderate southern governors in the 1970s and ‘80s who embraced progressive ideas on racial issues, the environment, education, crime, taxation and economic growth. He was all but unknown outside his conservative panhandle constituency when he ran for governor in 1970, although he had served 12 years in the State Legislature. But he was tall, lean and telegenic — and he promised to tax corporate profits. He caught fire with voters who saw him as a populist tilting against big business, and he handily defeated the incumbent Republican, Gov. Claude R. Kirk Jr.” (via New York Times)

SOUTH BY SOUTH MESS: “An intoxicated driver fleeing police plowed his car into a crowd at the South by Southwest festival in Austin, killing two people, authorities said early Thursday. The man and woman killed were riding their light motorcycles, said Art Acevedo, chief of the Austin Police Department. At least 23 others were hospitalized, some with multiple internal injuries. A suspect is in custody and faces two counts of capital murder and 23 counts of aggravated assault by vehicle, Acevedo said. Before the incident, the man was driving the wrong direction on a one-way street. Authorities attempted to stop the car, but it sped off, almost hitting an officer, according to Acevedo. The car later ran into the crowd. ‘It looked like something out of a movie,’ said Russ Barone, who was at the festival. ‘A few people lying on the street ... with their friends around them trying to get them up, trying to get them back to life. Hopefully, they are.’ He said the scene was grisly, with people bleeding in the streets. ‘I've never seen nothing like it. I felt like I was at a war or something,’ Barone said. ‘I was down here for the music ... we were having the best time ever. And then it turned into the worst thing I've ever seen.’” (via CNN)

TOO SOON? SOME PEOPLE NEVER LEARN: “DCCC Chairman Steve Israel this morning deemed Alex Sink an ‘extraordinary candidate’ and said he wants her to run again. ‘The decision is hers to make,’ Israel said in a conference call. ‘We're not going to approach her until she has time to kind of assess her options. But I believe that if Alex Sink decides to run, she will win November and we do will everything, and I mean everything, to support her.’ Asked about other potential challengers to Rep.-elect David Jolly, Israel said: ‘We haven't started thinking about who else may be viable. I am hopeful that Alex and I can talk soon.’ Israel and pollster Geoff Garin played down the effect of Obamacare in the outcome, though conceded it was a motivating factor for Republicans. Sink lost, they asserted, because Democrats did not turn out on Election Day. If Obamacare motivated Republicans yesterday, Democrats feel Gov. Rick Scott will drive November turnout in their favor. Garin noted than 49,000 fewer people voted Tuesday than in the November 2010 general election, a drop of about 21 percent. He asserted that Sink had " essentially neutralized" the health care issue by stressing she wanted to see changes, and not just repeal. ‘In our final poll, where the ballot test was dead even, she had an advantage above what she was performing on the ballot test in terms of who people trusted on the Affordable Care Act. She was sort of out-performing her vote on that particular issue.’” (via Tampa Bay Times)