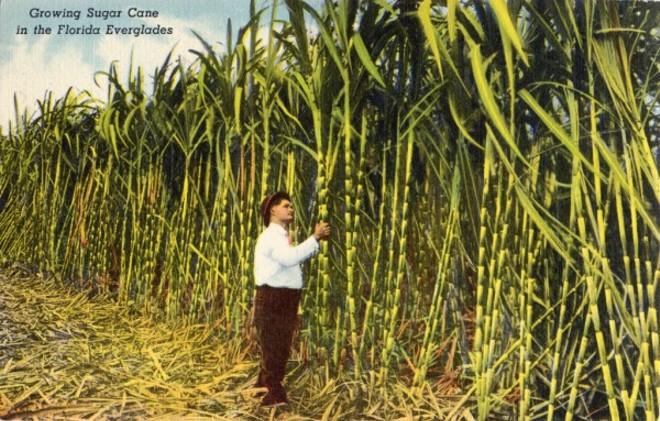 HAHAHAHA, FLORIDA LEGISLATORS HAVE A SWEET TOOTH FOR CAMPAIGN DONATIONS, APPARENTLY (PART 3,489): “Florida taxpayers have been left shouldering most of the $2 billion Everglades water pollution cleanup cost, despite a constitutional amendment passed by nearly 70 percent of voters that calls for the sugar industry to pick up its share of the tab. While South Florida sugar-cane growers excel at providing the sweet ingredient for everything from cakes to candy bars, polluted phosphorus-laden runoff from sugar-cane fields has damaging consequences on the Everglades. About 62 percent of the polluting phosphorus that flows toward the Everglades comes from water draining off farmland dominated by sugar cane, according to state environmental records. But just 12 percent of the $2 billion cleanup expense has been paid by special taxes on those sugar-cane growers and other farmers south of Lake Okeechobee. That means other property taxpayers have had to dig deeper into their wallets to pay to tackle the unnaturally high phosphorus infusion that is a prime focus of Everglades restoration. A "Polluter Pays" amendment to the Florida Constitution that voters approved in 1996 was supposed to force the sugar industry to at least cover its share of cleaning up damage to the Everglades. But some say state leaders have failed to fully enforce the measure. That means ‘it shifts the burden of cleaning up the Everglades to taxpayers,’ said Dave Cullen, Sierra Club lobbyist. ‘Everybody else's [share] gets bigger.’” (via Sun-Sentinel)

MAYBE ADELSON’S ANTI-WEED GAMBLE WILL PAY OFF IN WAYS HE DIDN’T EXPECT: “The geniuses running the Republican campaign effort in Florida have now decided that stirring opposition to medical marijuana will help Gov. Rick Scott win. Casino billionaire Sheldon Adelson, a huge donor to pro-Scott forces, recently gave $2.5 million to a new group aiming to defeat a proposed constitutional amendment that would legalize cannabis use for patients with cancer, glaucoma, multiple sclerosis and six other serious diseases. Recent polls show that between 66 percent and 70 percent of likely Florida voters favor the medical-marijuana amendment, and that the support cuts broadly across party lines. The measure, listed as Amendment 2 on the November ballot, requires 60-percent approval to become law.  The question is why the Republican brain trust thinks it’s a crackerjack idea to attack a popular social cause while Scott is fighting tooth-and-nail to save his job. The governor will be in deep trouble if thousands and thousands of marijuana advocates show up to vote in November. They’re not exactly his core constituency, so why get them riled? Scott’s opposition to the medical-marijuana amendment is well known. He should low-key the issue, except to point out that he has promised to sign a law allowing a non-euphoric strain of the herb to be used for treating severe epilepsy in children and other patients. That’s a humane decision, and it would win him votes. But now comes Adelson’s seven-figure donation to the Drug Free Florida Committee, dedicated to defeating Amendment 2. You might wonder why a rich Las Vegas casino owner is trying to prevent sick people 2,000 miles away from gaining legal access to pot. You think Adelson is genuinely worried that medicinal cannabis is a gateway to total legalization, and that it poses a dire threat to the people of Florida? The man couldn’t care less. He’s all about getting Republicans elected.” (via Miami Herald)

LET’S BRING BACK SMALLPOX AND THE CONFEDERACY, AND OTHER GENIUS MANEUVERS INSPIRED BY JENNY MCCARTHY:  “A woman from Sunrise, Florida is now wanted on federal charges that she kidnapped her daughter in order to prevent her from being vaccinated and learning about black history.  Last April, Broward Circuit Judge Steven Feren granted dual custody of Lilly Everett to Megan Everett and Robert Baumann. On May 6, Baumann dropped his daughter off at her mother’s house for a week-long visit, but when he returned to the home, Everett was not there. Baumann did find a note, however, that read “You are a great dad” — with the word “great” underlined multiple times — but “if I let them take her and vaccinate her and brainwash her, I wouldn’t be doing what’s right. I cannot let a judge tell me how my daughter should be raised. We will miss you. But I had to leave.” On May 19, Broward Circuit Judge Michele Towbin Singer issued a warrant for Everett’s arrest on charges of custodial kidnapping, interference with court-ordered custody, and concealing a minor contrary to a court order. Federal authorities became involved on Friday when it became evident that Everett had crossed state lines in order to avoid prosecution on the state charges.  Baumann told The Orlando Sentinel that he had planned to have his daughter Lilly vaccinated so she could enroll in preschool, but that Everett objected to that plan. “She found this new idea that vaccines are horrible,” Baumann said. “I think she wanted to keep her from being vaccinated because that would keep her out of day care.” “One of the issues we had was, she wanted to home-school my daughter,” he added. “I didn’t want that to happen. She didn’t want Lilly to learn about black history. She just wanted her to learn about the Confederacy.’” (via The Raw Story)

THE SADDEST THING YOU’LL READ TODAY. WHEN SURVIVAL BECOMES A CURSE: “Steve Crohn seemed almost euphoric, as if relieved to be checking off items on a list that had grown overwhelmingly long. In July, he flew to London to install one of his paintings in the home of the friends who’d commissioned it. Back in New York, he caught up with emails, left messages on machines, never mentioning or exhibiting any despair. Over lunch with the dean of his alma mater, he offered to provide photos he’d taken in the ’60s for an exhibition on the civil-rights movement. To his younger sister he mailed a birthday card featuring a tabby cat, apparently knowing full well the circumstances under which it would later arrive. He made lists of his bank accounts and passwords. Check, check, check.  And he finished his maps. For his entire life as an artist—he was now 66—he’d had to support himself and give structure to his existence with various day jobs: copyediting, magazine production, interior design, social work. But proofreading for Fodor’s was his longest-running gig, and perhaps the most congenial. He could do it from home, or what now passed as home. And for a punctilious person, it could be oddly satisfying. He would carefully read the manuscripts of travel books the publisher was preparing, compare the texts to the maps, and make sure everything mentioned in one was accurately pictured in the other. This time, this last time, he saw that the restaurant 2 Fools and a Bull was missing from the Oranjestad detail. The Tropicana Aruba resort on Eagle Beach had also gone missing. He neatly noted these mistakes, then brought the completed work to the Random House building, leaving it at the lobby desk. This was last August, Thursday the 15th, 1:30 in the afternoon.  Perhaps you saw him that pleasant day: one of those friendly-looking gay New Yorkers, aging but not old, thick but not fat, six-footish, with blue eyes and a slight dusting of ginger in the white fuzz haloing his face. Beefy worker’s hands, yet with a fine gold band on the right ring finger. Busy like someone with lots of work and places to be—though this was a front. He was freelance in the largest sense: unattached, perhaps unattachable. Most of all he was a survivor, which to him meant not just being but being special. He smoked Dunhills. Brushed his teeth with Vade­mecum. Was hearty with strangers, dapper at cocktails, cultivating the air of a wealthy eccentric despite his Social Security check. He dressed just so: often a neckerchief jauntily affixed, a beanie or a bolo tie, a popped collar, interesting socks. He had the verbal flair of Oscar Wilde if Wilde had 12-stepped. “Darling!” he’d call anyone. Or, an encouragement: “Go you!” The obituaries got a lot wrong, but this much was right: Stephen Lyon Crohn didn’t die of AIDS. Not dying of AIDS was in fact the reason he got obituaries at all. Certainly it wasn’t because of his hundreds of artworks, however beautiful; few people had seen them. Being the great-nephew of the great Burrill Crohn—the doctor who described and gave his name to the chronic inflammatory disorder—was a piquant detail but not the point. No, it was Steve’s own medical description that earned him inches in the Daily News: ‘?‘The Man Who Can’t Catch AIDS’ commits suicide at age of 66.’ Or, as the Los Angeles Times put it: “Immune to HIV but not its tragedy.’” (via NYMag)

THE LAST TO DIE FOR OUR MISTAKES