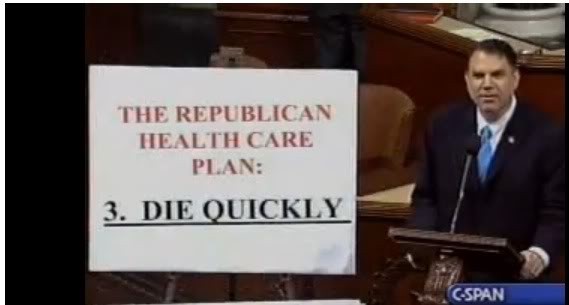 “DIE QUICKLY” TAKES ON A NEW MEANING WHEN MASHED UP WITH “AUSTERITY.” WE ARE BECOMING GREECE, SAYS CONGRESSMAN ALAN GRAYSON. I THOUGHT WE SAID IT COULDN’T HAPPEN HERE: “In America, we have a rich and powerful lobby that has the same prescription for every economic malady: austerity. Cut-cut-cut. Cut Social Security and Medicare. Cut teacher and police and firefighter jobs. Cut health care. Cut pay and cut pensions. It all boils down to that one ugly word: austerity. And austerity always brings disarray, disaster, decay and death. People often ask me my position on various issues. Well, I'm for certain things, and I'm against others. But on one issue, I'm very consistent. I'm against pain and suffering. Especially avoidable pain and suffering. And therefore, I'm against austerity. It begins with seemingly innocuous budget cuts. It then leads inexorably to the destruction of countless lives.” (via Huffington Post)

YESTERDAY, REMEMBER HOW CLEAR IT SEEMED:

OR LIVE FOREVER? APPARENTLY NOBODY IN FLORIDA WANTS TO GET OLD, AND NOBODY AT THE STATE DEPARTMENT OF HEALTH HAS ANY INTEREST IN REGULATING SNAKE OIL: “As a result, Florida now has 549 anti-aging clinics, the most in the nation. ‘We need to apply the same kind of rules and regulations that we're currently applying to pain clinics to these operations,’ says Sen. Eleanor Sobel, a Hollywood Democrat. ‘Felons should not be allowed to operate these clinics and they should be open to inspection by the state... This needs to become a priority in Tallahassee.’" (via Miami New Times)

DESTROYING RECORDS IS THE NEW GOVERNING IF THE REPUBLICAN STATE LEGISLATURE AND ORANGE COUNTY ARE ANYTHING TO GO BY: "The Legislature has argued it did not have to provide such information under its own record-retention rules, but had nonetheless asked lawmakers to search for such correspondence. In October, House and Senate lawyers denied any records 'were deleted, destroyed, lost, misappropriated, or otherwise ... unavailable for production.' But in a revised response to the interrogatories filed Wednesday in Leon County Circuit Court, the Legislature changed its answer and admitted that some records created during the 2012 legislative session were destroyed -- per the legislative bodies' standard policy for record retention. And they blame the plaintiffs for not asking that they be retained prior to the litigation.” (via Orlando Sentinel)

AS PROMISED, STATE REP. LINDA STEWART HAS FILED HER DOMESTIC PARTNERSHIP REGISTRY BILL FOR THE 2014 SESSION. IT’S NOT MARRIAGE, BUT IT’S SOMETHING: “Remember Orlando writer, Billy Manes, who endured heartbreaking injustices when his partner of 11 years died, and his homophobic in-laws swooped in and took Alan’s body—and tried to take virtually everything Billy owned. Remember Joyce Ducas, who had all of the recommended contractual documents when her longtime partner, Claudia, entered the hospital with lymphoma, where hospital personnel refused to honor the documents. When Claudia died seven months later, the funeral home refused to deal with Joyce in making Claudia’s funeral arrangements.  There are Billys and Joyces living throughout Florida who are suffering, or about to suffer, these injustices every single day. They need help now, not five years from now.” (via Watermark)