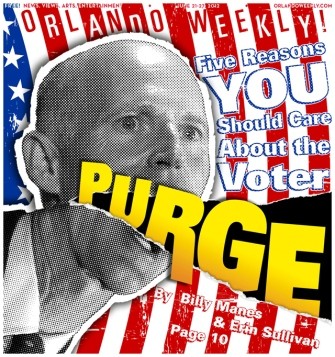 VOTER SUPRESSION STARTS NOW! EVEN IF IT’S NOT LEGAL!: “Gov. Rick Scott's chief elections official issued an order Monday that imposes new restrictions on how and where voters can return completed absentee ballots in future elections. At least two county election supervisors, Brian Corley in Pasco County and Deborah Clark in Pinellas, are troubled by the decision, say they were never consulted by the state and predicted that it could depress turnout. Pinellas is also the county where voters will soon elect a new member of Congress to replace the late C.W. Bill Young. The two-page order, officially called a ‘directive,’ was issued by Secretary of State Ken Detzner. But Detzner does not have the authority to issue binding directives to supervisors, who are elected constitutional officers, so it is unclear how many counties would obey it.” (via Tampa Bay Times)

NEWLY MAGICAL SOCCER WILL ALSO SAVE DYING MIAMI PORT! AND CREATE A BANKABLE IN-STATE RIVALRY! BALLS!: “[Mayor] Gimenez has said the county would not finance a stadium. But it could lease county-owned land at the port to the owners of an expansion MLS franchise, who would then build a stadium themselves. A 25-year master plan for the debt-laden port envisions revamping its southwest corner with commercial development to bring in revenue, including a hotel, an office complex and a harbor for mega-yachts facing downtown’s Bayside Marketplace.” (via Miami Herald)

SORRY, NOT SORRY! 2 DRUNK 2 TAKE RESPONSIBILITY, DRUNK-DRIVING TWITTER-TROUBLER’S FAMILY SUGGESTS HACKING WAS THE CULPRIT. AWESOME: “They told New Times her entire Twitter feed -- which teems with allusions to drug and alcohol abuse and has sparked outrage from Miami to London -- is a sham. Someone hacked her account, they claim, planting most if not all of her more than 5,000 tweets.” (via Broward-Palm Beach New Times)

STEUBENVILLE AUTHORITIES ATTEMPT FULL REVERSAL OF RAPE-FILLED PUBLIC RELATIONS NIGHTMARE. WELL DONE: “A grand jury on Monday charged a school superintendent and three others with lying or failing to report possible child abuse after an investigation prompted by the rape of the West Virginia girl by two high school football players. ‘This community is rectifying the problem. This community is taking charge. This community is fixing things. This community is holding people accountable,’ Attorney General Mike DeWine said. ‘That's what this grand jury did.’” (via Huffington Post)

PASCO COUNTY LIBERTARIAN SHOWS HOW ANGRY AND STUPID PASCO LIBERTARIANS CAN BE!: One of Pasco County’s most outspoken government critics made a political statement Monday when she paid her $11,075.44 tax bill in $1 bills and 44 pennies. “It took several employees more than an hour to count and verify it,” Pasco County Tax Collector Mike Fasano said. “It was correct — down to the penny.” Julann Roe, a registered Libertarian, lives on a 41-acre estate in Dade City valued at $711,447. Her property on Mickler Road includes a 4,014-square-foot home with a covered pool, jacuzzi and outdoor fireplace, a detached three-car garage and horse stables worth $118,300. Roe could not be reached for comment. (via Tampa Tribune)