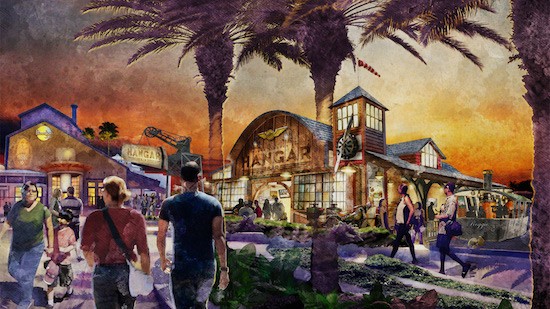 The name Jock Lindsey might ring a bell for some of you hardcore Indiana Jones fans; he is the pilot friend of Indy who saves him in the iconic scene from Raiders of the Lost Ark. He is seen or referenced in various other scenes throughout the series.

The 150 seat bar will take cues from both the Indiana Jones franchise and from aviation history. Vintage travel posters, propellers and Indiana Jones gags will fill the space. Propeller-like fans will hang from the ceiling and letters between Indy, Jock and their friends will fill the walls. A large outdoor patio, themed to an old steamboat, will be built onto the side of the hanger style building.

Just like the recently opened Trader Sam’s, ordering certain drinks at Jock Lindsey’s will cue special effects to happen in the restaurant. Small plate food options will include “Rolling Boulder Meatballs” and “Air Pirates Everything Pretzels.”

Jock Lindsey’s will be part of The Landing at Disney Springs. The Landing replaces Pleasure Island; an adult focused entertainment district that was home to the Adventure’s Club. That club, which Disney closed 6 years ago in anticipation of what we now know as Disney Springs, featured a travel theme and certain specialty drinks that set off special effects.

Interestingly enough and unlike Paradiso or Boathouse, Jock Lindsey’s will be owned and operated by The Walt Disney Company.

As Downtown Disney continues its evolution into Disney Springs we are beginning to learn more about the offerings of this upscale, faux Florida town. The Boathouse, with its famous $115 steak, has been all the rage in the Disney "tweetosphere" lately but it’ll soon have some stiff competition right next door, with the opening of Jock Lindsey's. 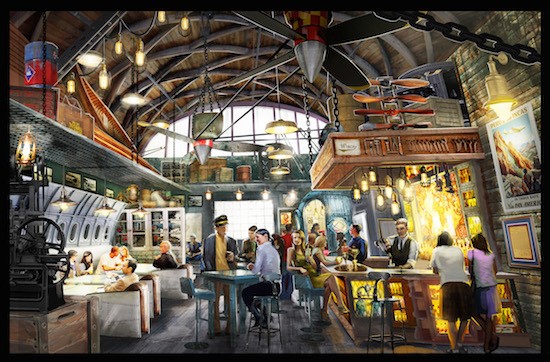