With less than 30% of Florida fully vaccinated, Gov. Ron DeSantis is pushing unemployed Floridians back to work 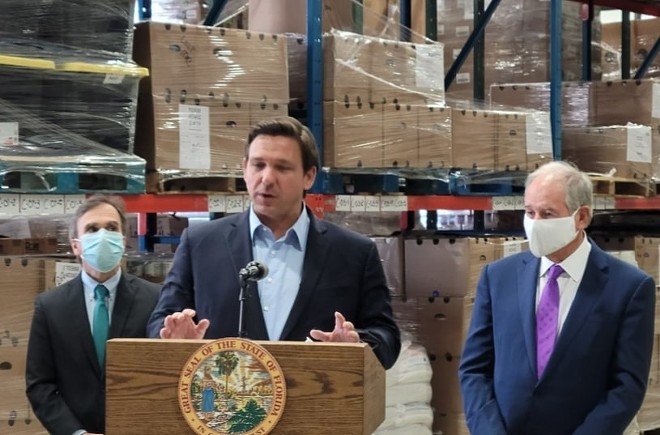 Referring to some businesses saying they are unable to find new employees as they regroup from the COVID-19 pandemic, DeSantis said Wednesday unemployment claimants will likely have to start showing how they looked for work once an executive order waiving a work-search requirement ends May 29.

“We suspended that last year at this time because, quite frankly, there weren’t jobs,” DeSantis said during an appearance at the Satellite Beach Police Department.

Florida’s unemployment rate stood at 4.7 percent in March, representing 475,000 people out of work from a workforce of 10.17 million. The state Department of Economic Opportunity will release an April report on May 21. The rate was 13.8 percent in April 2020, after the pandemic forced businesses to shut down or dramatically scale back.

“I think now we're in just a different situation, you have a surplus of jobs, particularly in restaurant, lodging, hospitality, that people want to hire,” DeSantis said. “I mean, you see the signs all over the place. Look, that's a good problem to have. But we also just want to make sure, like, look, if you're really unemployed, can't get a job, that's one thing. But making sure that you're doing your due diligence to look for work, and making sure those incentives align, better.”

Without the waiver, Florida, which has some of the lowest unemployment benefits in the nation, requires people on unemployment to reach out to five prospective employers each week.

The Florida Senate approved a bill (SB 1906) last month that would have increased maximum weekly payments from $275 to $375, added more weeks in which benefits would be available and changed the work-search requirement. The proposal called for the number of job searches to drop to three a week for most people and to two a week for people living in counties with fewer than 75,000 residents.

But DeSantis voiced opposition to the increase in weekly payments, and the House did not take up the Senate bill.

A concern of House Republicans was that increased benefits could lead to businesses being required to pay more money into the state’s unemployment compensation trust fund. Similar reasoning was used when benefits were cut in 2011 to blunt a major increase in unemployment taxes on businesses.

On Wednesday, DeSantis continued to criticize the federal Centers for Disease Control and Prevention about COVID-19 precautions that have idled the cruise-ship industry in Florida. Also, he said some restaurants are closing one day a week because they don’t have enough employees.

DeSantis somewhat dismissed the premise of a question about whether people were taking advantage of changes in the unemployment system. While Florida offers low state benefits, many unemployed people also have been eligible for federal jobless aid.

“I don't think it's manipulation. You know, whatever the benefits are, people are availing themselves of it. That's not their fault,” DeSantis said.

Since March 15, 2020, the state has paid out nearly $27.2 billion in state and federal relief to 2.39 million unemployment claimants. The federal government has accounted for $21.5 billion of the money.

Currently, only 27% of the state's residents are fully vaccinated. In spite of this, DeSantis overruled all local emergency mandates via executive order earlier this week, sending the message that municipalities will be forced to return to normal operations. Florida is currently third in the nation in its rate of new COVID-19 cases per 100 thousand residents, behind Delaware and Minnesota. It is also near the top in its rate of new deaths from the illness.