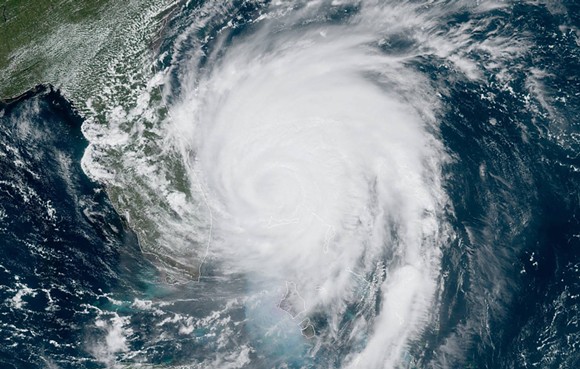 Hurricane Dorian, now a weaker Category 2, continues to linger above Grand Bahama Island, where there are still life-threatening storm surges.

A 12:00 p.m. NOAA report says wind gusts have been measured up to 130 mph, with storm surges 10 to 15 feet above normal tide levels and extreme flooding from up to 30 inches of rain. "These hazards will continue over Grand Bahama Island through much of today," says the report.

The report also notes "wind gusts to tropical storm force are now occurring along the Treasure Coast of Florida," and that "a Weatherflow station at Jensen Beach recently reported a wind gust of 46 mph."

The center of the storm is now 45 miles north of Freeport, Grand Bahama Island, and about 105 miles east of Fort Pierce, with maximum sustained winds of 110 mph. The storm is crawling northwest at 2 mph.

According to the National Hurricane Center, Dorian is expected to inch up the Florida coast Tuesday and Wednesday, dumping rain across the region. Even though the storm is expected to stay off the coast, a deviation from its forecast could send it closer into land.

Image via NOAA, Sept. 3, 8:00 a.m.
Hurricane-force wind gusts are likely Tuesday on land near the coast, and a storm surge of 4-7 feet is possible.

By Wednesday afternoon, Dorian's center is expected to be around the Daytona Beach to Jacksonville area. Residents are advised to follow the storm via official channels on social media.