Why a statewide domestic partnership registry matters to me. 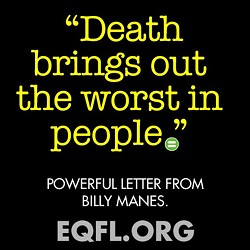 This morning, Equality Florida published the testimony I had intended to give before the Florida Senate Committee on Children, Families and Elder Affairs in support of Senate Bill 196 on March 12. That hearing was postponed when Sen. Geraldine Thompson, D-Orlando, fell unexpectedly ill. Today, the bill will have another hearing at 3:15 p.m. (which you can stream live here). Attorney Mary Meeks – who has represented me for the last year – will be testifying, and citing my story. [UPDATE: THE BILL PASSED THE COMMITTEE BY 5-4 MARGIN. "WE HAVE MADE HISTORY IN THE FLORIDA SENATE," SEN. SOBEL] This week marks one year since my partner of 11 years, Alan, passed away (April 8, 2012, Easter Sunday). I'll be detailing the legal nightmares that followed his death in next week's Orlando Weekly (April 10) as a means of explaining why the estate planning option that Republicans are clinging to isn't enough in our darkest hours. While nothing short of equality is ever enough, SB 196 would go some way in validating committed relationships like the one I was lucky enough to have. I can't tell you how difficult it is dredging up all of these memories and making sense of them, but I think it's important. I hope you do too. Alan was the love of my life.

Here is my testimony:

I came to Tallahassee on March 12 to deliver the following testimony before your committee with regard to SB 196. The bill was temporarily postponed that day, but seeing as you're hearing it again on April 1 – and I am not able to deliver it in person – I hope you'll take a moment to consider my story. I also hope that you will do the right thing and vote "Yes" on the domestic partnership registry. It could really help people when they need it the most. It would have helped me. Thank you for your time.

Good afternoon, ladies and gentlemen. Thank you for having me. My name is Billy Manes. I’m a journalist from Orlando, Florida. I wish I were here to talk about someone else’s story, but I’m not.

I met my partner, Alan Jordan, in January 2001. We were opposites—he a former football player at Auburn University with a southern drawl and the politics to match, me, a liberal extrovert. But nonetheless we quickly fell in love. In 2002, we bought a house together, though my name wasn’t on the deed, and we set about forming our family—our dogs, our friends, our birthday parties and backyard barbeques. He was my rock, my support. I was full of big ideas, and he was heavy with reason. When I ran for mayor of Orlando in 2005, he was my treasurer and coach. He believed in me. It would be no exaggeration to say that he saved my life.

I supported him too. When he got his pilot’s license, I bit my lip and flew in his single-engine puddle-jumper. When his father died in 2006 and he made the decision to commute back and forth to Georgia to take care of his mother, I held down the fort in Orlando. When his health started to deteriorate, I was there every step of the way—doctor’s offices, therapists, disability, you name it.

In 2008, as Amendment 2 loomed, we contacted an attorney and executed all of the documents available to LGBT families in Florida: power of attorney, health surrogate, and a will, among others. We were as much a legal couple as the laws of the state of Florida permitted us to be.

On Easter Sunday of last year, after a long battle with health problems and depression, Alan shot himself in the chest in the backyard of our house. I screamed; I tried to resuscitate him; I called 911. But it was no use.

The police came. They checked my hands for gunpowder. After three hours, the ambulance took away his body.

Before I’d even washed his blood out of my hair, Alan’s brother showed up on my doorstep. In the next 24 hours, he identified Alan’s body at the morgue, had it cremated without my knowledge or consent, changed his address with the postmaster, and began walking around my house identifying items that the family thought belonged to them: a lawnmower, tools, guns, the commitment rings on my fingers. They ignored the fact that everything in our house belonged to both of us.

I was in shock and distraught, as you can imagine. But I still made clear to them, as I gave them the will that left everything to me, that I wanted to work with the family in a manner that was fair for both of us. I understood that they were in pain—and that they didn’t know that Alan was in a relationship with a man. Because Alan’s sexuality was touchy subject in his hometown of Rome, Georgia, his family didn’t talk or want to know about his personal life. Alan’s brother and a friend of his drove away with two cars that were registered in my name because they thought they were Alan’s cars. In my own panic, I let that happen.

I threw a memorial service to celebrate Alan, and hundreds of people showed up—including the mayor of Orlando and former state representative Scott Plakon. An attorney friend was at the service as well, and offered her services should I need them.

Before we could even file the will in Orange County court, I learned that the family had already opened a probate case listing Alan’s mother as his personal representative and sole beneficiary.

What followed was a nightmare. On top of my grief and uncertainty and horror, I found myself having to fight to claim what our legal documents already said was mine. I obtained a court order to correct the probate and to get the items that had been removed from my house returned. However, after thousands of dollars and months and of legal wrangling I gave up. I sacrificed most of the assets to which I was legally entitled for the sake of my sanity.

I don’t think that the family was acting capriciously—at least now I don’t. They, like me, were grieving, trying to come to terms with an unspeakable loss. Death so often brings out the worst in people.

I struggled with the idea of coming here today, of making my story public. But in my heart, I know that this is what Alan would have wanted. In fact, as difficult as the last year has been, I’ve been incredibly fortunate. I knew my rights. I had attorneys looking out for me. I had a strong circle of supportive friends and family. I had a job that cared about my personal situation.

Not every gay man or lesbian is so lucky. Since Alan’s death, I’ve spoken with several members of the LGBT community who, when faced with the devastating death of a partner, lost everything. And this could have been me: My name wasn’t on the deed to my house. I could easily have been homeless. I didn’t have a right to anything that was in Alan’s name—not our mutual savings, not his inheritance, not even our cars – because I didn't have the inherent legal right to inherit Alan's estate, which this Bill would correct. This Bill can save people from suffering through what I went through, at the worst time of my life.

And so I’m here to ask you to right this wrong. I recognize that under the state’s constitution, I am unable to marry the person I love. And he’s gone anyway. But how can we, as a state, in good conscience, even as we praise the family as the backbone of our society, deny even the most basic, fundamental rights to hundreds of thousands of your constituents who pay their taxes, go to work, and play by the rules?

I don’t believe that I’m asking for much. I’m not asking for the right to marry, or the right to a civil union. I’m not even here to ask you to recognize that the love Alan and I shared is equal to the love you have for your spouse, although that would be nice.

All I’m asking for is compassion and dignity. Please don’t let that be too much.