While speaking in Tampa, Jeff Sessions says we should just take an aspirin instead of using opioids 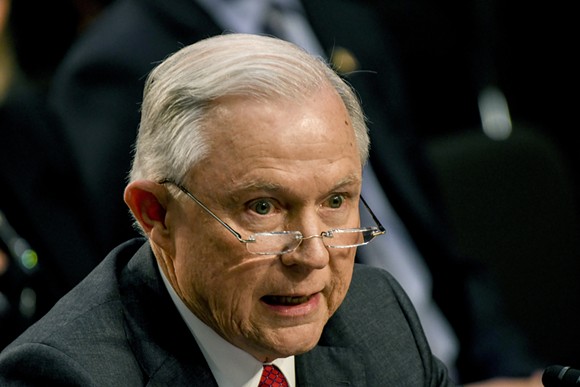 Photo via Shutterstock
U.S. Attorney General Jeff Sessions is clueless when it comes addiction as a medical condition, and his comments in Florida on Wednesday proved just that.

Sessions delivered a nearly half-hour speech at the U.S. Attorney’s Office in Tampa yesterday – at times reportedly going off-script. As he addressed local authorities and federal prosecutors, Sessions lauded the Trump administration’s plans to take on the nation’s growing opioid epidemic, which, according to the most recent numbers, is still killing roughly 175 Americans a day. Going further, the chief lawyer of the U.S. government offered a bit of advice as well: Don’t shoot heroin, pop aspirin.

“I am operating on the assumption that this country prescribes too many opioids,” Session told those in attendance. “People need to take some aspirin sometimes.”

Eureka – why didn’t we think of that?

Had someone brought up that same point about a decade ago, perhaps opioid-related deaths in Florida wouldn’t have spiked by 35 percent in 2016, to a total of more than 5,700 individual deaths in a single year.

Maybe heroin’s supped-up cousin fentanyl wouldn’t have been the driver behind an astonishing 97 percent increase in overdoses in that same year, from 705 in 2015 to almost 1,400 in 2016.

Perhaps, borrowing from Sessions’ logic, had someone simply opted for an extra shot of espresso in chai latte instead of chopping out one too many lines of methamphetamine, meth-related deaths wouldn’t have jumped a jaw-dropping 171 percent in 2016 either.

The numbers above are all according to a report released by the Florida Department of Law Enforcement in November, and they were certainly eye-catching enough for Sessions to mention them during his Wednesday afternoon talk too.

“As we all know, these are not numbers,” Sessions remarked. “These are moms, dads, daughters, spouses, friends and neighbors.”

Sessions then steered the conversation towards his own recent experience with opioids, such as when Gen. John Kelly – the current White House Chief of Staff – refused to take his prescribed opioids following a minor surgery. In his best impersonation of Kelly, Sessions told the crowd, “He goes, ‘I’m not taking any drugs.’” A few chuckles were reportedly heard in return.

“But, I mean, a lot of people – you can get through these things,” Sessions said, following up his flop of a joke.

Rather than stop there, Sessions decided to end the speech on a strong note, so he turned on the bravado and bragged on how Florida is currently leading the country in its efforts to combat the opioid epidemic.

However, the Florida Democratic Party’s statement in response to the attorney general’s comments most certainly did not concur:


“Florida is not leading the fight in the opioid crisis because of [Gov.] Rick Scott’s lack of action on the issue, in fact because of Scott, Florida has no agency to address the epidemic. Scott slashed budgets for drug treatment and mental health services, tried to make it harder for law enforcement to crackdown on criminals pushing illegal pills and even rejected millions in federal dollars that could help save lives. Scott’s own Attorney General Pam Bondi even said his recent efforts amounted to ‘nothing.’”