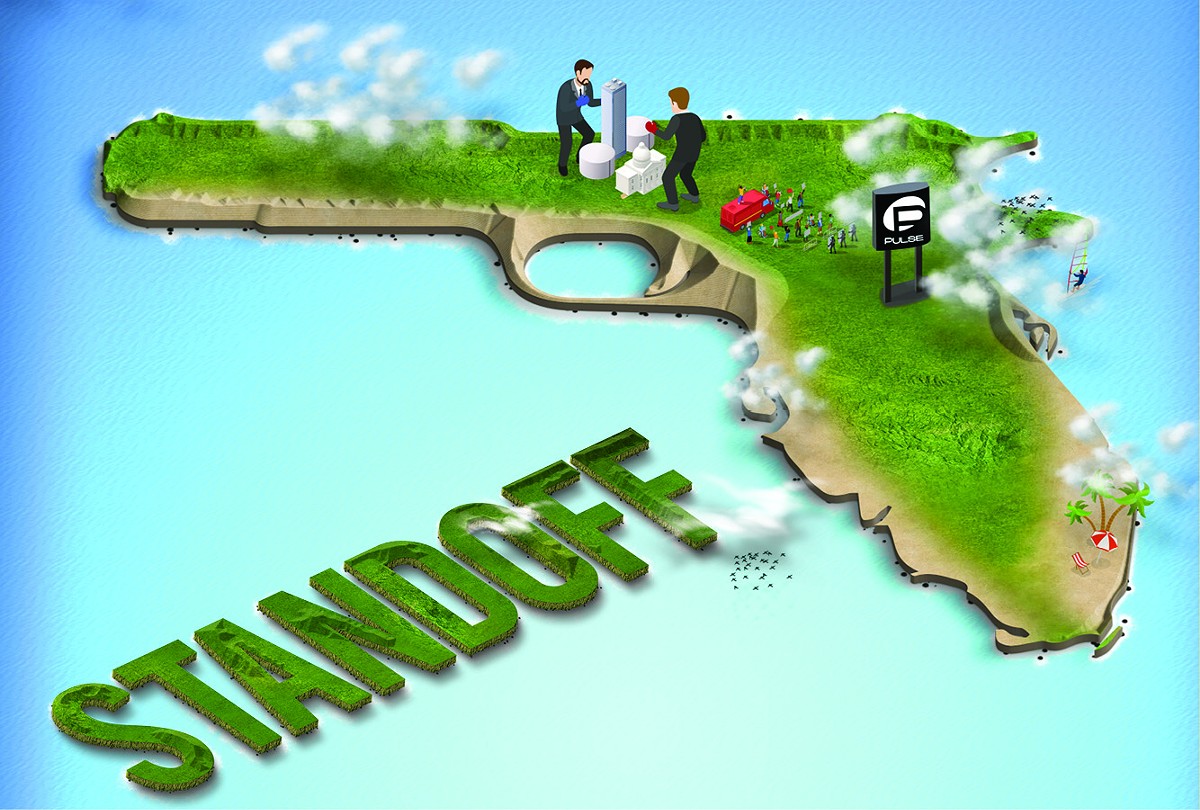 State Sen. Greg Steube, the proponent of the measure to allow concealed carry in airports, stood by his bill even after another gunman opened fire with a semi-automatic handgun at the Fort Lauderdale-Hollywood International Airport last week, killing five people and wounding six others in the baggage claim area. The shooter, 26-year-old Esteban Santiago, was an Iraq war veteran who in November had walked into an Alaska FBI office and told them the U.S. government was making him watch ISIS videos. Officials took his gun but less than a month later they returned it to him. Steube tells the Miami New Times the airport shooting reinforces his point that "people should have the ability to defend themselves." Orlando Weekly reached out to Steube for a comment but did not hear back by press time.

Smith and Stewart acknowledge their bills are a long shot. But after Pulse, gun reform advocates say they're done playing defense against outlandish proposals backed by the gun lobby. They want to go on the offense.

Patti Brigham, chair of the gun safety committee of the League of Women Voters of Florida, says the major difference between this upcoming session and past sessions is gun reform advocates' sheer force in numbers. Within days of the Pulse incident, the worst mass shooting in modern American history, Brigham and the state League started the Florida Coalition to Prevent Gun Violence. The nonpartisan coalition currently teams more than 100 participating organizations across the state and nation.

"They're people from all walks of life, not just gun-safety organizations," she says. "We've got the Hispanic community, the LGBTQ community, the African-American community, and the education and faith-based community. We've got more motor power this year."

Brigham says the coalition has made a commitment to Pulse families, survivors and everyone affected by the tragedy to bring sensible gun-safety legislation to Florida, no matter how long it takes.

"I like to say it's not a 5K race, it's a marathon," she says. "I'm always hopeful, but I'm realistic. I know this is a tough battle, but we will continue to fight until we are victorious."

Aside from commanding a strict ideological adherence, the gun lobby's grip on the Florida Legislature and Congress is tight due to the power of political contributions. In last year's election, the NRA spent about $50.3 million in the presidential race and six Senate races, including $3.2 million to help Florida's U.S. Sen. Marco Rubio keep his seat, according to Open Secrets, a national research group that tracks money in politics. The organization also unsuccessfully spent about $57,800 to re-elect U.S. Rep. John Mica, a Winter Park Republican who ended up losing to Democratic newbie Stephanie Murphy. Legislators who stray from the NRA's ideology that, according to its political website, "gun control schemes are an infringement on the Second Amendment," pay the price by losing contributions or by being downgraded on the organization's rating endorsement system.

The last time an assault weapons bill similar to Smith and Stewart's was put forward in the Florida Legislature was in 2013, part of a series of similar proposals in different states after the killing of 20 children and six adults at Sandy Hook Elementary School. After the Sandy Hook shooting, Connecticut passed a law banning assault weapons, something Smith says a majority of Central Floridians would support. Almost half of Floridians – 49 percent – say a ban on semi-automatic assault weapon sales is a move in the "right direction," according to the 2016 USF-Nielsen Sunshine State Survey, while 37 percent said it would be a step in the "wrong direction" and 13 percent of those polled did not give an opinion.

"Those 49 people died of terrorism, homophobia and racism, but they also died because of our culture's obsession with assault weapons," Rep. Smith says. "They're weapons of war and the gold standard for mass murder. We believe people have a right to protect themselves, but semi-automatic weapons of destruction are not necessary."

At a press conference in Orlando last week, Sen. Stewart said her bill is not meant to ban guns or restrict the Second Amendment.

"We are not trying to take away your guns," she said. "But it is also worth mentioning that the people killed by gun violence every day have rights, too. ... So long as criminals and madmen have access to them, we as Floridians are not safe."

"There's no question Tallahassee has been hostile to common-sense gun safety measures for years and years," Smith adds. "The gun lobby has had a stranglehold on process. ... I hope the first special interest they crack down on is the gun lobby and the [National Rifle Association]."