Siclaly Santiago-León wants lawmakers in Tallahassee to know about the worst day of her life. She wants them to know how she almost got arrested on June 12 as she tried to push past police officers to look for her cousin Luis Daniel Wilson-León and his partner, Jean Carlos Méndez Pérez, inside the gay nightclub Pulse.

If given the opportunity, she'd describe to them the desperation she felt as she waited with other families in a room near the hospital to hear updates on who survived the mass shooting; the anguished screams when they realized 49 of their loved ones, including Wilson-León and his partner, would not come home. And she'd tell them what it feels like to miss someone forever.

"I know he's gone, but I can't believe it happened. I can't," she says. "I still take it day by day, but the holidays were just so awful. I don't want anybody else to suffer or hurt the way we have, ever."

More than anything, Santiago-León says she wants Florida legislators to know she believes "Dani" was killed partly because of the state's minimal restrictions on gun purchases.

"I will not let my cousin's memory fade away," she says. "He died because of irresponsibility with our legislation. He died because of a violent act that shouldn't have happened. You can argue to pieces about whether it was this type of gun or that type of gun, but I don't care. I'm not going to let him have died without people knowing why."

Santiago-León and others directly affected by the Pulse massacre plan to testify at the Florida State Capitol in the coming months in support of a measure that would ban the sale and possession of assault weapons and large-capacity magazines. The bill includes a long list of specific assault-rifle models, including the Sig Sauer MCX rifle, which Omar Mateen used to kill 49 people and injure more than 53 at Pulse about seven months ago.

State Rep. Carlos Guillermo Smith and Sen. Linda Stewart, both Orlando Democrats, filed their respective proposals in a Florida Legislature where it stands little chance of success. In this Legislature, the dominant Republican majority is more interested in bills to allow concealed-weapons licensees to openly carry handguns in public and to allow people to be armed on college campuses, in airport passenger terminals, and at government meetings and elementary and secondary schools.

State Sen. Greg Steube, the proponent of the measure to allow concealed carry in airports, stood by his bill even after another gunman opened fire with a semi-automatic handgun at the Fort Lauderdale-Hollywood International Airport last week, killing five people and wounding six others in the baggage claim area. The shooter, 26-year-old Esteban Santiago, was an Iraq war veteran who in November had walked into an Alaska FBI office and told them the U.S. government was making him watch ISIS videos. Officials took his gun but less than a month later they returned it to him. Steube tells the Miami New Times the airport shooting reinforces his point that "people should have the ability to defend themselves." Orlando Weekly reached out to Steube for a comment but did not hear back by press time.

Smith and Stewart acknowledge their bills are a long shot. But after Pulse, gun reform advocates say they're done playing defense against outlandish proposals backed by the gun lobby. They want to go on the offense.

Patti Brigham, chair of the gun safety committee of the League of Women Voters of Florida, says the major difference between this upcoming session and past sessions is gun reform advocates' sheer force in numbers. Within days of the Pulse incident, the worst mass shooting in modern American history, Brigham and the state League started the Florida Coalition to Prevent Gun Violence. The nonpartisan coalition currently teams more than 100 participating organizations across the state and nation.

"They're people from all walks of life, not just gun-safety organizations," she says. "We've got the Hispanic community, the LGBTQ community, the African-American community, and the education and faith-based community. We've got more motor power this year."

Brigham says the coalition has made a commitment to Pulse families, survivors and everyone affected by the tragedy to bring sensible gun-safety legislation to Florida, no matter how long it takes.

"I like to say it's not a 5K race, it's a marathon," she says. "I'm always hopeful, but I'm realistic. I know this is a tough battle, but we will continue to fight until we are victorious."

Aside from commanding a strict ideological adherence, the gun lobby's grip on the Florida Legislature and Congress is tight due to the power of political contributions. In last year's election, the NRA spent about $50.3 million in the presidential race and six Senate races, including $3.2 million to help Florida's U.S. Sen. Marco Rubio keep his seat, according to Open Secrets, a national research group that tracks money in politics. The organization also unsuccessfully spent about $57,800 to re-elect U.S. Rep. John Mica, a Winter Park Republican who ended up losing to Democratic newbie Stephanie Murphy. Legislators who stray from the NRA's ideology that, according to its political website, "gun control schemes are an infringement on the Second Amendment," pay the price by losing contributions or by being downgraded on the organization's rating endorsement system.

The last time an assault weapons bill similar to Smith and Stewart's was put forward in the Florida Legislature was in 2013, part of a series of similar proposals in different states after the killing of 20 children and six adults at Sandy Hook Elementary School. After the Sandy Hook shooting, Connecticut passed a law banning assault weapons, something Smith says a majority of Central Floridians would support. Almost half of Floridians – 49 percent – say a ban on semi-automatic assault weapon sales is a move in the "right direction," according to the 2016 USF-Nielsen Sunshine State Survey, while 37 percent said it would be a step in the "wrong direction" and 13 percent of those polled did not give an opinion.

"Those 49 people died of terrorism, homophobia and racism, but they also died because of our culture's obsession with assault weapons," Rep. Smith says. "They're weapons of war and the gold standard for mass murder. We believe people have a right to protect themselves, but semi-automatic weapons of destruction are not necessary."

At a press conference in Orlando last week, Sen. Stewart said her bill is not meant to ban guns or restrict the Second Amendment.

"We are not trying to take away your guns," she said. "But it is also worth mentioning that the people killed by gun violence every day have rights, too. ... So long as criminals and madmen have access to them, we as Floridians are not safe."

"There's no question Tallahassee has been hostile to common-sense gun safety measures for years and years," Smith adds. "The gun lobby has had a stranglehold on process. ... I hope the first special interest they crack down on is the gun lobby and the [National Rifle Association]." 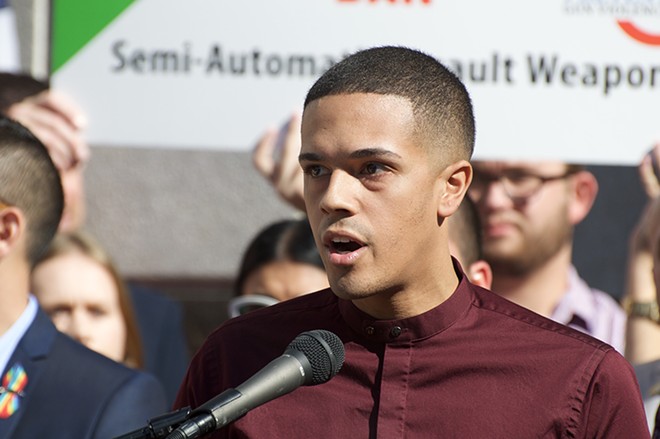 State Rep. Scott Plakon, R-Longwood, says he won't comment on the assault weapons bills filed by Smith and Stewart until he's looked them over. But Plakon recently filed his own bill to allow people with concealed carry licenses to carry guns on college and university campuses. He says he believes areas like college campuses, schools and nightclubs like Pulse that are "gun-free zones" have become targets for "evil people" to commit shootings because others are defenseless, and people should be able to protect themselves. Plakon supports the measure because of a 2013 incident involving his daughter at Lake Mary High School – a false active shooter was reported, and Plakon felt his daughter was unprotected in the situation.

"We're essentially born with Second Amendment rights under the Constitution, so there has to be a darn good reason to restrict that," he says. "Thirty-one states have some form of campus carry and nothing horrible has happened. ... Why continue to deny these adults their rights?"

But technically, Pulse wasn't a "gun-free zone" because, although civilians could not carry guns in the club, Pulse had armed security present. On the night of the shooting, Adam Gruler, an off-duty Orlando Police officer, was working security for the club. When the first shots started at 2:02 a.m., Gruler engaged in a gun battle with Mateen toward the entrance of the club. But early on, Gruler realized Mateen, who was carrying a Sig Sauer MCX .223 caliber rifle and a Glock 17 9mm semiautomatic pistol, outgunned him. He called for backup as Mateen retreated further into the club, and a couple of minutes later, two other officers arrived for another shootout with the gunman.

A recent study from John Hopkins Bloomberg School of Public Health contradicted the "gun-free zone" theory when it found that in mass shootings involving six or more victims from 1966 to June 2016, only 12 percent of those shootings actually took place in areas where guns were totally restricted, including for armed security or police or armed civilians. Only about 5 percent of those shootings occurred in a zone where civilian gun possession was prohibited.

"Successful civilian uses of guns to stop a mass shooting were incredibly rare and about as common as armed civilians being shot while attempting to respond to mass shooting incidents," the 2016 study says. "Furthermore, the data show no evidence that Right-to-Carry laws – which, it is argued, lead to more armed citizens ready to defend against a mass shooting – reduce mass shootings or the number of people shot in those incidents."

Plakon acknowledges that Pulse and college campuses may not truly be "gun free zones" because of armed security and police, but says the solutions gun reform advocates talk about wouldn't stop these tragedies, because "the reality is the bad guys will always get the guns."

"They don't obey the law," he says. "You can write all the laws you want, but then, the question is, do you allow the good guys to protect themselves? And the answer is yes, in appropriate places, and I've come to the conclusion that includes college campuses."

At an Orlando press conference last week, Brandon Wolf told the crowd of about 50 gun reform advocates in front of the Orange County Courthouse that he remembers sitting frozen in one of Pulse's bathrooms as the gunman fired 30 rounds in a minute. Thirteen of those bullets fatally hit his two best friends, Drew Leinonen and Juan Ramon Guerrero.

"We didn't just arm hate on June 12," Wolf said. "We militarized it. We handed hate an assault weapon and we said, 'Is that going to be cash or card?'"

Wolf said he knows that limiting magazine sizes and access to assault weapons isn't going to stop violence in the world, but he nonetheless believes it's a clear signal that, while hate can't be stopped, it can be disarmed.