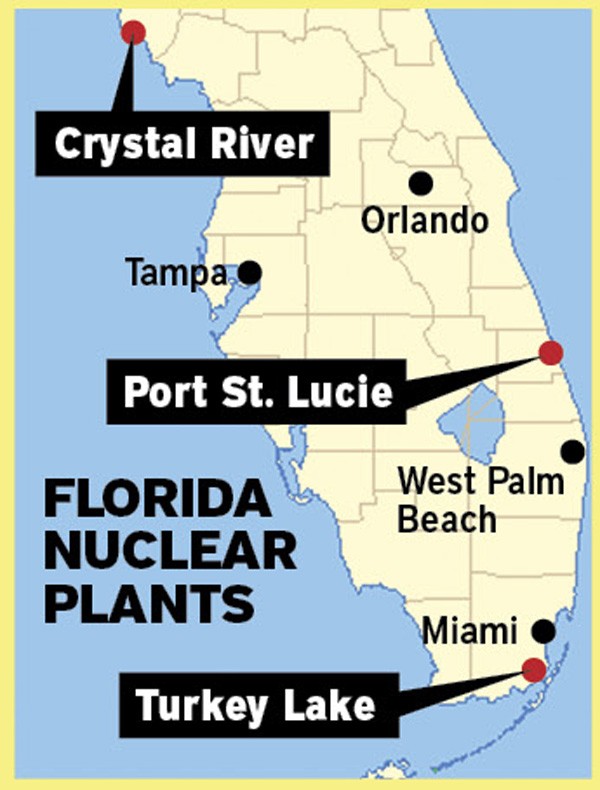 Within days of the earthquake and tsunami that rocked Japan in early March, sending its Fukushima Daiichi nuclear power plant spiraling into meltdown, the nuclear power industry stateside circled its wagons.

"Nuclear crisis like Japan's unlikely at Fla. Reactors," a March 14 headline from the Palm Beach Post insisted, while the Florida Keys Reporter told its readers there are "systems in place to avoid nuclear disaster here."

But those systems designed to protect us, say investigative reporters at nonprofit investigative newsroom ProPublica, may not be as foolproof as nuclear proponents would like the public to believe. The organization's series on regulation of nuclear power plants across the country found that many of the safety guidelines put in place by the Nuclear Regulatory Commission, which is supposed to be our nation's nuclear energy watchdog, were written with substantial input from the industry's trade group, the Nuclear Energy Institute. Among other things, ProPublica discovered, the NRC's guidelines on protecting nuclear plants from fire risks "cites an NEI document that ‘provides the majority of the guidance applicable' for analyzing fire risk at plants."

Even worse, ProPublica found and this story reports, the NRC has been routinely waiving fire-rule violations at half the nuclear plants in the country. Instead, it's allowing plants to come up with their own fire-risk analysis and action protocols. "Until their plans are approved, NRC has said it will enforce only the most serious violations of fire rules," according to ProPublica. All five of the nuclear reactors in Florida are on the list of plants with "pending" customized fire-safety plans.

And it seems the NRC is not pleased that ProPublica is even looking into the issue. What follows is a note from editor Stephen Engelberg, posted at propublica.org (where you can view all of the organization's investigations), regarding his reporters' attempts to look into the nuclear industry:

"At ProPublica, we began asking questions about this issue long before the disaster at the nuclear plant [in Japan]. The response from the Nuclear Regulatory Commission can only be characterized as hostile. Spokesmen for the agency repeatedly rejected any suggestion that they were allowing fire hazards to persist at the nation's nuclear plants.

Last September, NRC spokesman Eliot Brenner sent an email in response to our written questions. It said the ‘fire safety program leadership' had asked him ‘to relay their conviction that the time devoted to ProPublica's two years of questions has taken staff away from performing mission- critical safety activities on behalf of the public.'

In my more than three decades of covering the federal government, I have never seen such a response to legitimate questions about a crucial issue."

ProPublica allows news organizations to use its investigative pieces for free, and given the fact that Florida's nuclear plants are currently operating without stringent fire-regulation oversight – and the fact that there are currently plans on the table from Progress Energy and Florida Power & Light to begin construction on up to four new reactors in the state as early as 2013 – it's an issue our state's residents should know about. Better yet, they should care.