Image via NOAA GOES
We made memes, ate Publix hurricane cakes, and enjoyed specials on hurricane drinks downtown, but Hurricane Dorian's unpredictable path did, for a moment, have Central Florida on edge. 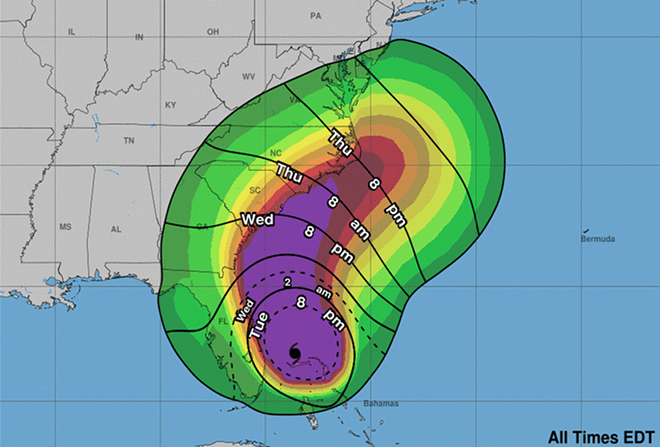 Image via NOAA, Sept. 3 at 11:00 a.m.
Initial trajectories put the storm on a path directly toward us. Orange County and the city of Orlando were in a state of emergency, and officials prepared for the worst.

The powerful storm devastated the Bahamas, and now the death toll there is steadily climbing into the double digits while the number of damaged or destroyed homes passes 13,000.

But then, as the storm neared the Sunshine state, the path shifted yet again. It went north-north east, brushing our east coast as a Category 2 then picking up strength as it moved past Florida.


Imagine having to clean THIS room! Such a close call, Walker, 7, says he always sleeps in his room, but decided to sleep downstairs during storm. Whew! @ABCNews4 #chsnews #DorianSC pic.twitter.com/lktiGm9ugO

Dorian has now made landfall in South Carolina as a strong Category 2 storm, and it's showing us what could have happened in the Sunshine State.

Videos depicting major flooding have already made the rounds on Twitter. There are people kayaking in the streets, there's a church missing part of it's roof, and there's massive tree inside the room of a 7-year-old boy, who was uninjured.


[9:00AM] FLASH FLOODING will be likely for Hampton Roads and Northeast NC from Hurricane Dorian. Rainfall amounts could be as high as 8-10" for extreme Southeast VA and Coastal Northeast NC. All preparations need to be completed by midday today! #NCwx #VAwx #MDwx #Dorian pic.twitter.com/S34pQfjRMB

One of the highest wind gusts have passed 90 mph, according to South Carolina meteorologist Alex Calamia.


The state has at least 33 evacuation centers operating, and around 202,000 households have lost power, according to the South Carolina Emergency Management Division.

All in all, Florida can be grateful we were spared Dorian's full impact. You can already donate or volunteer toward Dorian relief in the Bahamas with many groups and organizations.