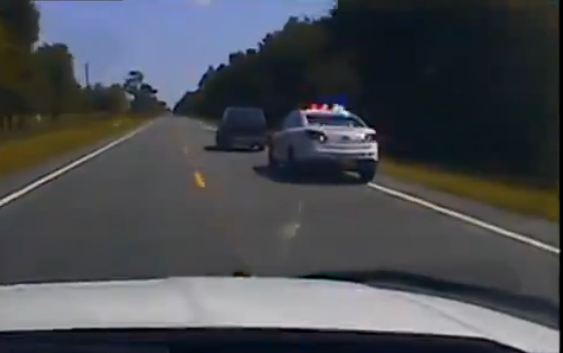 Screengrab via LiveLeak
Last Friday, June 19th, Richard Sanders led local authorities in a high speed car chase in Silver Springs, Florida, until he was ultimately taken out by a police K9.

According to LiveLeak, Marion County Sheriff's Office responded to a report of domestic violence battery at Silver River Inn, where Sanders then fled the scene and led officers in a pursuit through Marion, Citrus and Levy County.

During the pursuit, Sanders drove into oncoming traffic, rear-ended a patrol car and avoided 7-8 sets of stop sticks.

The chase came to an end in Levy County on Highway 41, after a deputy performed a PIT maneuver on Sander's truck. As you can see in the video, when the truck comes to a stop, Sanders flees on foot for about 50 ft until a police K9, named K9 Sig, subdues him.

"An unknown substance was ejected from the suspect vehicle after the crash, which deputies believe to be methamphetamine," says LiveLeak, "Sanders and two other passengers in his vehicle were transported to the hospital and are expected to recover. The MCSO deputy that was rear-ended is being treated for his injuries and K9 Sig is unharmed. The investigation is continuing."