Why is there a billboard for the Cincinnati Creation Museum on I-4? 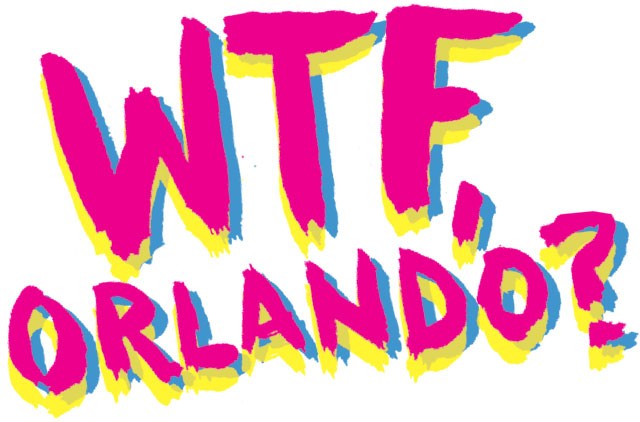 I saw the strangest thing driving home the other day.

A giant maroon Tyrannosaurus rex stampeding across a barren sandscape, its teeth bared at the gridlocked cars below.

I turn down the Journey blasting through my car speakers, to make sure I'm not hallucinating '80s hair metal album covers on the Orlando skyline, but the big fella keeps on chilling up there.

I am stunned. The billboard would leave even Andy Warhol painfully confused. Is it kitschy pop art? An ironic, phantasmagoria-promo-explosion for the Flaming Lips' upcoming tour? Are the Merry Pranksters anywhere to be found? Or is the Awesome Lobe in my brain simply hemorrhaging pure batshit crazy straight into my eyeballs?

Mired in the rush-hour traffic turning eastbound I-4 into a virtual parking lot, I can't not look at it. A Marvel-esque scroll of letters, heralding "The Thrilling T-Rex," sits just above the lizard's massive head, and there, tucked in the left-hand corner, is the answer.

A small, cartoonish speech bubble reads: "At the Creation Museum" – The Cincinnati Creation Museum, to be exact. As in the Cincinnati Bengals. As in Ohio, which – as the billboard eagerly informs us – is just 905 miles away from Orlando. I've seen a bit about that place in Bill Maher's movie, Religulous, where exhibits depict dinosaurs and humans living in totally-not-murdering-each-other-for-blood-sport harmony.

Languishing in the Orlando heat, I have little choice but to sweat, stare into the creature's jagged maw and mull over some issues while I wait.

I won't nitpick how said dinosaur shares the same desperate hue of a jaded divorcé's sports car. But it's fairly rude to disregard the recent archeological discoveries in China of feathered, carnivorous dinosaur fossils – for years scientists hypothesized that downy coats had covered the creatures' bodies. Lo, our T-Rex is woefully featherless. Maybe I shouldn't expect a group that appraises the Earth's age at only 6,000 years to run through their marketing materials with a fine-toothed comb.

However, these guys displayed some savvy when they put Rex front and center, relegating their friends in the Holy Trinity to remain somewhere outside of the frame. (I like to think they're watching from an unseen gallery, in garishly brimmed hats.) It sidesteps the implication that, if the Earth really is 6,000 years old, famous religious figures shared the world with dinosaurs. Think The Flintstones, but more smite-y. Still, I could've gone for putting someone on Rex's back to dish out some ravenous, Bible-fed vengeance on downtown Orlando. Ishmael gets my vote.

And "905 miles from Greater Cincinnati"? Yes, that soft "thud" you heard up in Ohio is the sound of Orlando residents nearly 1,000 miles away, dropping everything to bum-rush the next flight to Cincy. I can only imagine how the meeting went: "Ladies and gentlemen, we need to raise awareness for our exhibit. We've got bodacious dinosaur art, but where do we put it?"

"How about Lexington, or Columbus?"

"No, no. How about Orlando, Florida?"

Seriously, though: Why is there a Cincinnati Creation Museum Billboard on I-4?

So I called to find out.

"Thank you for calling the Creation Museum," the receptionist greets me. "How may I help you?"

"I think that's an advertisement for our museum."

"All the way down here?"

"Yes, we have them all over the country to raise awareness."

"Of our museum. We just have sculptures of dinosaurs. If you have Internet access, you can get on our website and we can answer any of your questions!"

There you have it. "Have a blessed day!" she says, all cheery country twang, before getting off the phone. I thank her and hang up. Soon traffic starts moving again, and no matter how ridiculous I think the whole premise is – the museum, the billboard, the location – I have to smile at the thought of it.

That toothy, aw-shucks grin up in the sky as I pull toward the exit ramp.

Scott Horn is a freelance writer who lives in Orlando and a regular contributor to Orlando Weekly.