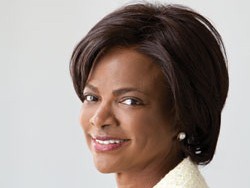 OH HEY YOU GUYS, two days before she was to make a public/official announcement, former police chief and congressional candidate Val Demings leaked the exclusive to the Sentinel that she will indeed be running against Orange County Mayor Teresa Jacobs in this year's August stakes. HOORAY! Here's the gist from the Sentinel:

Demings said there are a number of people, including herself, who feel that Jacobs did not deliver on past promises to run an ethical government that was open and accessible to the public.

In other words, texty musings of the dishonest variety are on trial here, and thank GOD we have a choice. Here's the official press release. More as it happens!

Val Demings Will Run For Mayor of Orange County
Former Police Chief Val Demings Will Officially Announce Campaign for Mayor
Orlando’s former Police Chief, Val Demings, filed the paperwork necessary to run for Orange County Mayor this morning. She will officially launch her campaign Thursday, January 9, 2014 at 3 p.m. at Lake Eola Park in Orlando.
“For months, I’ve been asked by countless citizens to run for Orange County Mayor. They want a leader who will stand up for them. Like many of them, I too, have grown disappointed with the forgotten promises of the current administration. That’s why I’m running for Mayor,” said Chief Val Demings.
Chief Demings will be joined by supporters for the official launch of her campaign on Thursday at Lake Eola Park in Orlando.
When: Thursday, January 9, 2014 at 3pm
Where: Lake Eola Park 101 N. Rosalind Ave. Orlando, FL