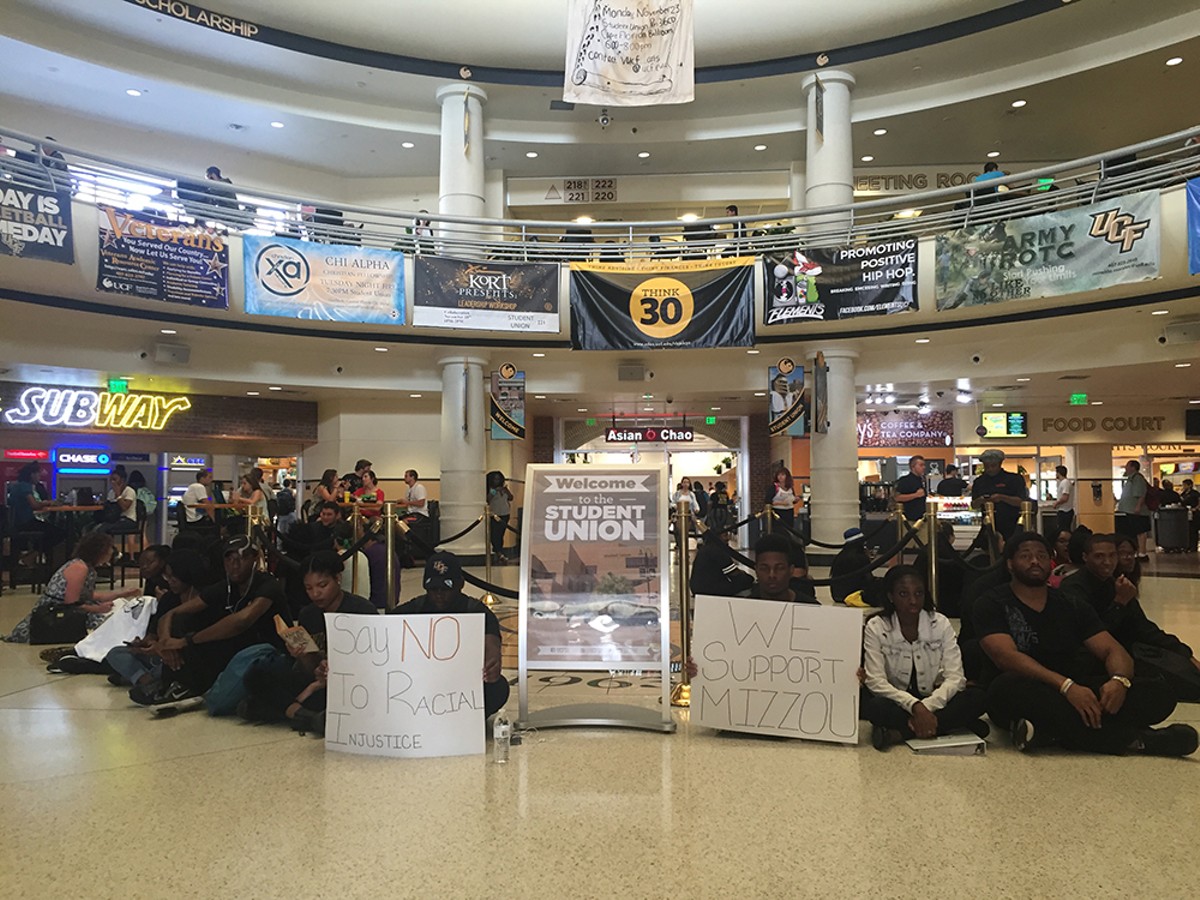 Student protests against racial injustice at the University of Missouri that led to the ouster of the school's president sparked similar movements on college campuses nationwide, and the University of Central Florida was no exception.

Two weeks ago, UCF's Black Student Union held a sit-in to support the organization that spearheaded the protests, Concerned Student 1950, and convened a town hall meeting to discuss issues on campus. Earlier in November, Nazi symbols and anti-Semitic fliers were found at the school.

"As the voice of minorities on campus, it is our job to make sure that racial injustice is not happening on campus whatsoever," Courtney Powell, president of the BSU, told us during the protest. "Mizzou inspired us to speak out because of the events that have been happening over the past five years, because they've been experiencing so much racial injustice."

A few days after students sat on the ground for hours, someone made a Facebook page called "White Student Union at UCF," sparking immediate comments and criticism online.

"We welcome students of European descent (and allies) to follow and contribute to the UCF White Student Union," a post from Nov. 21 says. "European-American students on college campuses face unique and immediate challenges that are ignored or even actively denied in today's cultural climate."

In a lengthy statement to the press on Nov. 24, the group said:

"We are not a racist or white supremacist organization. We do not desire to discriminate against non-whites or diminish their cultures. In fact, we welcome non-white allies who support our freedoms of speech and association. But we will not apologize for being white. We will not self-flagellate for the sins of our ancestors. We will not be emotionally blackmailed to go along with the displacement of white people and culture in the name of 'diversity' or 'equality.'"

About 30 Facebook pages popped up in connection with college campuses across the country with a similar message. Some media outlets, including The Daily Beast, have disputed the validity of the pages and deemed them a "hoax."

The UCF White Student Union says the page was "created by current UCF students and alumni in response to startling BLM (Black Lives Matter) protests taking place on college campuses across the country." UCF spokeswoman Courtney Gilmartin says the group is not affiliated with the school or a registered student organization, and UCF reported the unauthorized use of its trademarks to Facebook last week.

Professor Robert Cassanello, who teaches history at UCF, and Anthony Major, professor and director of Africana Studies at the college, both say the school's administration is responsive to racial issues and cited UCF President John Hitt's recent letter calling for tolerance of different cultures on campus.

BSU president Powell says the organization did not want to comment about the page at first because students were not sure the page was real.

"What we did was not a derogatory movement toward other cultures," she says. "It was out of love and support for fellow students at Mizzou, as well as allegations happening on this campus. Our quest for love has been taken out of context."

Regardless of whether the UCF White Student Union page is fake, its narratives and the debates about the page are misdirecting the discussion that BSU students tried to start, says professor Julian Chambliss, chair of the history department at Rollins College.

"This assertion of whiteness under attack, regardless of the form it takes, changes the subject," he says. "Instead of asking why students of color are having these protests, they create a counter-narrative that ignores the critique. They don't investigate why those students felt the need to protest."

Chambliss says it's natural for many students to distance themselves from racist behavior, but it's harder for students to recognize the privilege they have within the system and truly understand other students who do not share that experience.

"When vocal people in the majority are offering hostile, clearly overtly racist comments, as a person from a position of power, you don't know exactly what the minority is experiencing, but you assume you're not involved," he says. "But we're talking about structural issues that you may be participating in unconsciously because of your position in the majority. It's complicated because white students might think they're not like those people doing horrible things, but they're avoiding the question of why students of color are complaining."