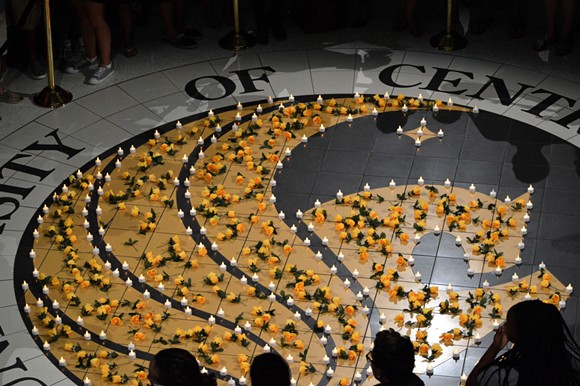 Photo by Monivette Cordeiro
The University of Central Florida is commemorating the three-month anniversary of the mass shooting at the gay nightclub Pulse that killed 49 people and injured 53 others by asking students to share their stories and a moment of silence.

UCF is asking students and faculty to hold 49 seconds of silence at 2 p.m. on Monday, Sept. 12, in honor of the lives lost on June 12. The remembrance event at the Morgridge International Reading Center on UCF's campus at 1:45 p.m. will feature a panel to discuss the aftermath of the shooting on Orlando and on the different communities it impacted. The event will be moderated by Justin Andrade, a representative from UCF's LGBTQ+ Services office, and will include Carlos Guillermo Smith from Equality Florida as a keynote speaker.

The UCF community lost two members in the Pulse massacre: Juan Ramon Guerrero, a pre-finance major at the university, and Christopher "Drew" Leinonen, an alumnus who earned bachelor’s and master’s degrees in psychology. The two men were a couple, and Guerrero's family members say they had plans to marry.