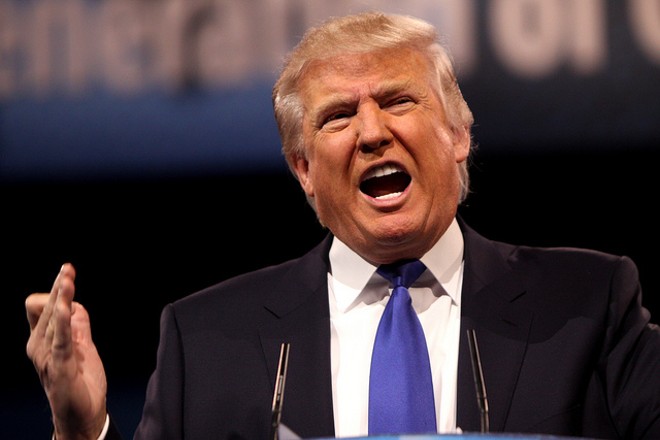 Photo by Gage Skidmore via Flickr
President Donald Trump took the Florida governor's race to a new low Monday morning when he falsely accused Democratic gubernatorial candidate Andrew Gillum of being a "thief."

In his latest iteration of accusing black people of crimes without evidence,
Trump made the comments on Twitter in his latest endorsement for Republican gubernatorial nominee Ron DeSantis.


In Florida there is a choice between a Harvard/Yale educated man named @RonDeSantisFL who has been a great Congressman and will be a great Governor - and a Dem who is a thief and who is Mayor of poorly run Tallahassee, said to be one of the most corrupt cities in the Country!


To be clear, Gillum, Florida's first African American nominee for governor, has not been convicted or accused of stealing anything.

The Florida Commission on Ethics is investigating a complaint about the Tallahassee mayor's trips to New York City and Costa Rica with a former lobbyist. Gillum has come under scrutiny after records revealed undercover FBI agents posing as developers gave Gillum a ticket to the Broadway musical Hamilton during one of these trips and paid for more than $4,000 in food and drinks for one of his campaign fundraisers. His campaign maintains Gillum's brother handed him the Hamilton ticket and that he "did not receive any contributions or in-kinds," from the developers, according to the Tampa Bay Times.

The city of Tallahassee is under a separate public corruption probe by federal officials, but Gillum has repeatedly stated the FBI told him he's not the "focus" of that investigation and called any allegations that he's being pursued by the FBI "false."

The president and his family, though, have actually been accused of cheating through multiple tax fraud schemes, according to a lengthy New York Times investigation. Trump also paid a $25 million settlement after he was accused of "swindling thousands of Americans out of millions of dollars through Trump University," USA Today reports.

Trump also took a swipe at Gillum's education by calling DeSantis a "Harvard/Yale educated man." The Democratic gubernatorial candidate received his bachelor's degree in political science from Florida A&M University, a historically black university. Trump mocks pretty much all his detractors, but has a noted habit of questioning the intelligence of black critics, according to the Washington Post. He's called U.S. Rep. Maxine Waters, who is black, a "low-IQ individual," questioned former President Barack Obama's degrees and called both CNN anchor Don Lemon and NBA star LeBron James "dumb."

Gillum has responded to Trump's comments on Twitter, saying the president was "howling because he's weak."

On Twitter there is a choice between having the courage to @ the person you are trash talking, or not. @realDonaldTrump is howling because he's weak. Florida, go vote today. https://t.co/I8uOokptJA


Meanwhile, DeSantis has thanked Trump for his comments without correcting his non-evidence-based claim that Gillum is a thief.


Thank you, @realDonaldTrump! See you in Ft. Myers! https://t.co/iSFl3xqPe7