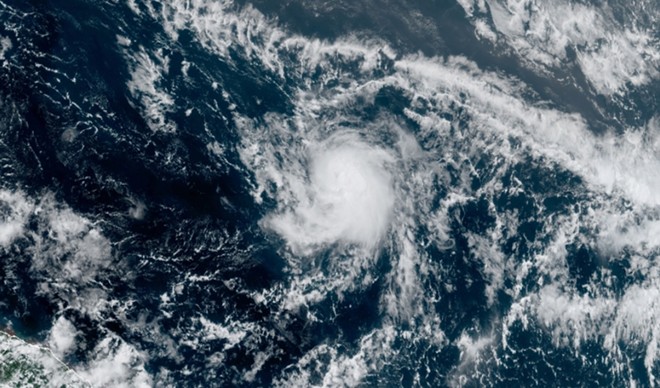 Quickly developing, Gonzalo is expected to develop into a hurricane by Thursday, according to the National Hurricane Center.

Currently, the storm is moving westward at 14 mph and is expected to speed up, says forecasters with the NHC. Gonzalo’s maximum sustained winds have also increased to 50 mph, and are expected to increase to 75 mph by Thursday.

Gonzalo is expected to move near or over the southern Windward Islands this weekend and could bring direct impacts from winds and heavy rainfall, according to the NHC.

Gonzalo sets the record for the earliest seventh named tropical storm of any Atlantic hurricane season.

It is unknown at this time if Tropical Storm Gonzalo will impact Florida, but the NHC’s next update will arrive at 5 p.m.

Gonzalo is now the seventh named storm so far during the Atlantic Hurricane Season. In May experts from the National Oceanic and Atmospheric Administration predicted an “above-normal” 2020 Hurricane Season. Previous named tropical storms thus far in hurricane season include Cristobal, Arthur, Bertha, Dolly, Fay and Edouard.

Meanwhile, forecasters are also keeping an eye on a tropical wave in the Gulf of Mexico, which is currently moving west toward Texas. That system has a 50 percent chance of developing in the next 5 days, says the NHC. This system isn’t expected to directly impact Florida, but should result in heavier rains through the weekend.


Here are the 11 am AST, Wednesday, July 22 Key Messages for Tropical Storm #Gonzalo. Interests in the southern Windward Islands should monitor the progress of #Gonzalo https://t.co/pLUNBzuC1h pic.twitter.com/2K86XexOcJ