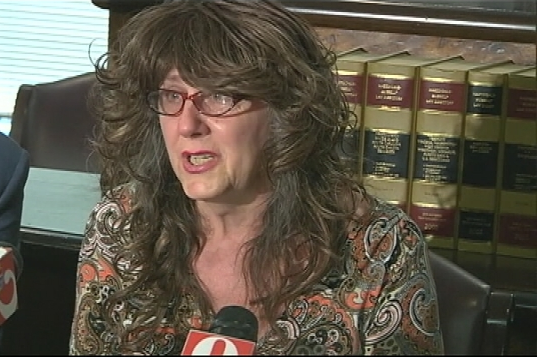 Photo via WFTV 9
A transgender woman is filing a lawsuit against Starwood Hotels and Resorts Worldwide after she says an Orlando hotel discriminated her while she was an employee.

Gina Versace, who is being represented by Morgan & Morgan, said Friday that she was fired from a Starwood hotel in 2013 in retaliation for her complaints, WFTV reports.

At a heart-breaking news conference, Versace cries as she details how she began working at Walt Disney World Swan and Dolphin in 1998 before her transition in 2005. She says that after she began presenting herself as a woman, her managers and coworkers refused to recognize her new legal status, even though she had provided them legal documents that confirmed her gender identity.

The suit, filed in an Orlando federal court, alleges that Versace was constantly misgendered, forbidden from using the women’s restroom and had her hours limited. Starwood representatives responded by issuing a statement denying the allegations and said the chain was “proud of its long commitment to the LGBT community.” If by committed to the LGBT community you mean being open for reservations during Gay Days at Disney, then yeah, sure.