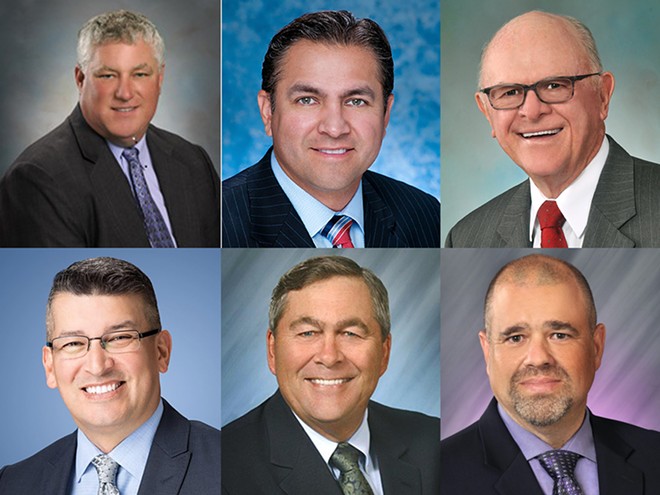 Photo via Toho Water Authority
The five members of the board of supervisors of the Toho Water Authority, and executive director Todd Swingle
Now that the coronavirus pandemic is completely over and Floridians of all ages and occupations have returned safely to work, Toho Water Authority will be resuming disconnections and reinstating late fees for Kissimmee water customers, beginning on Monday.

On March 17, in response to a crisis that demands frequent hand-washing, Toho began suspending disconnections and late fees for all customers. Conditions have certainly changed since that time, with the total number of cases statewide growing to 441,97 — with 9,230 added just since Monday morning. That includes 245 new cases in Osceola County reported since yesterday, for a total of 7,973 cases countywide.

Now, says the utility, "as our community enters recovery, and begins to reopen, Toho will resume its normal billing and collections procedures, as many utilities across the country have done."

Toho, whose tagline is "Bringing You Life's Most Precious Resource," thinks this is a fine time to shut off water to poor and unemployed Osceola residents.

Toho, whose tagline is "Bringing You Life's Most Precious Resource," thinks this is a fine time to shut off water to poor and unemployed Osceola residents.

Toho was established by the Florida legislature in 2003 and is Osceola's largest provider of water, wastewater and reclaimed water services, with more than 100,000 customers in Kissimmee, Poinciana and unincorporated areas of Osceola County.

The disconnections will resume the week after United Airlines announced they will lay off 447 workers at nearby Orlando International Airport, starting in October.

Guess those workers better pay their utility bill in advance while they still have a paycheck.

Toho isn't alone in the cruelty, of course. As they noted, others are back in the disconnection biz, including the Orlando Utilities Commission, which had suspended electricity and water disconnections back in March, but resumed fees and disconnections on July 13.

A group of more than 30 local nonprofit campaigns and justice organizations delivered a joint letter to Orlando Mayor Buddy Dyer on July 8, asking to delay the disconnections and late fees, but so far the mayor and the utility have not budged.

In April, OUC approved a $12 million COVID-19 response package to lower bills for the month of May, but since then, the region's unemployment rate has only grown.

OUC provides electricity and water services to more than 240,000 customers, including the residents of Orlando, unincorporated areas of Orange County, and the city of St. Cloud in Osceola County.

In Osceola, Toho is governed by a five-member board of supervisors — all five of whom are men with deep business and political connections — responsible for approving all its operating policies and its $124 million operating budget.

"The difficult decision to resume disconnections and late fees was not made lightly," said Toho's announcement. "And Toho’s goal is to help customers through this unprecedented time."

As still many thousands more are working from home, freelancing for extra income while facing Florida heat waves, water will be especially critical.

"We realize getting back to normal will take time, and we are here to help," said the announcement. Toho says customers who may have been unable to pay their bills or have fallen behind on payments are encouraged to request assistance before Monday. Customers can visit tohosupport.com to learn about and apply for financial programs, or by calling 407-944-5000.